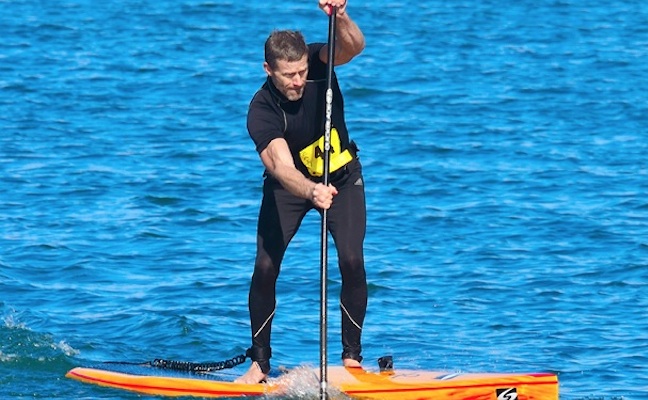 Wrightsville Beach, N.C - Launching the competitive SUP racing season, the 4th annual Wrightsville Beach Biathlon begins March 22, with practice runs and reception at Blockade Runner Beach Resort. On Saturday, March 23, extreme stand up paddleboard challengers face last year's winners, their own personal best, and experienced paddlers throughout the region. Expect strong currents, inlet chop and heavy stroking on a four-mile route that loops from Banks Channel to Money Island into the Intracoastal Waterway through Motts Channel and back to the starting point.

With the race half over, biathletes (or relay team members) will leave the water and sprint toward the oceanfront to compete in a four-mile pier-to-pier foot race in Wrightsville's beach sand, dramatically increasing the degree of difficulty compared to typical road races.

Relay teams are enticed into the competition with the coveted Masonboro Trophy and bragging rights for an entire year. Corporate-sponsored, male/male, male/female and husband-and-wife relay teams will battle for best times against defending relay champs Bike Cycles' Craig Stephens and Matt Whistoff. In 2012 they finished with a time of 1:13:40.

Top Individual Women's finisher in 2012 was Kimberly Sutton with a time of 1:34:15. Individual Men's competitors will be up against 2012 winner, Jarrod Covington who finished in 1:20:03. In last fall's Surf to Sound Challenge, Covington placed second to Larry Cain, a member of the Canadian Sports Hall of Fame and Canadian Gold Medal Olympian.

Wrightsville Beach and Blockade Runner Beach Resort host four major SUP events each year, attracting top SUP competitors in the world to North Carolina. Following the Wrightsville Beach Biathlon will be the annual Carolina Cup, planned for April 25-28; the North Carolina Surf to Sound Challenge traditionally held during the third weekend in November; and the Cold Stroke Classic in January.

The Wrightsville Beach Biathlon will benefit SUP Cleanup, an organization dedicated to maintaining clean waterways, marshes and barrier islands. This grass roots organization has grown to 17 chapters across the world, tackling trash problems in their local waterways. www.supcleanup.com

Have you participated in this event?

More in this category: « World's Most Expensive Sup Board Sells for $27,500 Wrightsville To Host 5th Annual Beach Biathlon »