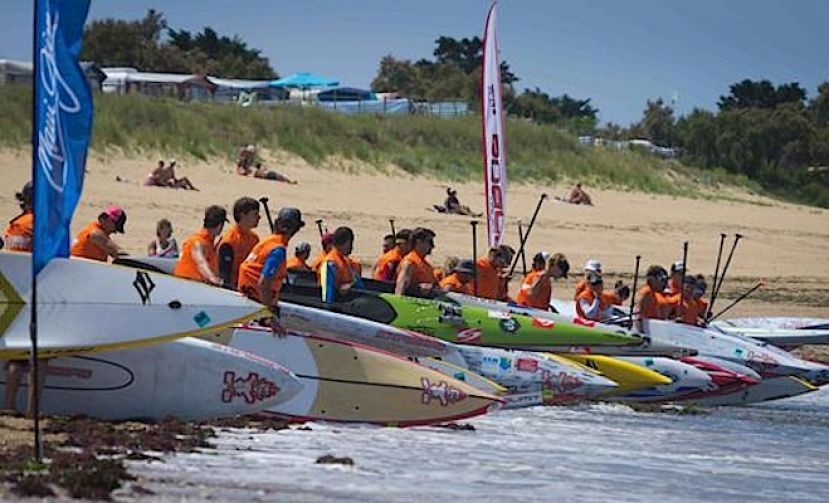 OLERON, FRANCE -·After a spectacular start to the 2013 season up in the glaciers of Patagonia for the Aragas Magallanes Paddle Challenge, the World's best then went onto Ubatuba, Brazil for stop 2, wrapping up the South American leg of the 2013 World Series.

Now the Stand Up World Series heads off to Europe for the month of June for stop 3 in Oleron Island on the west coast of France from the 7th - 9th June, and then on to Bilbao in the Basque country of Spain from the 21st - 23rd June.

In its second year as a World Series event, the Oleron Stand up Paddle Challenge will provide an exciting adventure for the world's best stand up paddle racers, as this beautiful island of the west coast of France will play host to a dramatic weekend of racing.

The flagship for this event is the long distance race, that will take the athletes on a spectacular journey around the island and past historic landmarks that define this beautiful area of France. As the only open ocean race of the European Trilogy of events on the 2013 World Series, this will provide a test of the paddlers ocean riding skills and racing strategy as they take on stop 3 of the 2013 World Series.

The World Series Sprint racing at Oleron will once again bring the coastal component of the Paddle Challenge to the fore, as athletes will have to navigate in and out of the surf zone for the dynamic heat elimination sprints.

The Bilbao World SUP Challenge will bring the World Series to the City for the first inner city race of the 2013 season. Held in the majestic city of Bilbao in the Basque region of Spain, the Bilbao World SUP Challenge will provide a dynamic platform for elite Stand Up Paddle Racing in front of an enthralled summer crowd, right in the center of the City.

With $20,000 prize-money at stake, together with vital ranking points towards the overall World Series ratings, stop 4 of the 2013 World Series promises to be a dramatic showdown for the world's best.

The long distance course will take the athletes on a water based journey through the city, while the World Series Sprints will consist of a fast paced racing showdown that will provide a spectacle for the vast on site audience and a breathtaking battle for victory for the world's best.

World's Best Head to Europe to do Battle on World Series

The prestigious yellow jersey holder, Connor Baxter (Starboard) will be heading over to Oleron and Bilbao with the goal being to continue his devastating form this year and to maintain and build on his ratings lead. However, it will not be without a battle, as arch rival Kai Lenny (Naish) is on a mission to get back on top following his World Title in 2012 and currently lying in second on the World Series Ratings.

These two leading athletes will be joined by an elite group of athletes from Hawaii, the US, Europe and beyond, as the two athletes sharing 3rd place in the ratings, Zane Schweitzer (Starboard) from Maui and Casper Steinfath (Naish) from Denmark will be present to continue their great 2013 form.

Also featured in this European leg of the Series will be Jamie Mitchell and Paul Jackson (Fanatic) from Australia, as they step up to do battle in France. These international athletes will of course have to contend with amongst Europe's best, from Eric Terrien (Bic SUP) from France to Leonard Nika (Starboard) from Italy, the competition will be intense.

Star-Studded Women's Fleet Prepare to do Battle in Europe

The Women's fleet will be star studded this year, as the world's very best racers prepare to do battle through the European leg of the World Series. 2012 World Champion Annabel Anderson (Starboard) will return to the place where she not only won in 2012, but beat the entire men's fleet in the process. She will be looking for a repeat performance in 2013, but will be met with some fierce competition from the wealth of up and coming European girls, led by Abu Dhabi All Star and leading French Racer Olivia Piana (Fanatic).

Also to watch out for though is the powerhouse from Australia and wife of Paul Jackson (Fanatic), Angela Jackson (Fanatic), who will be looking to continue her great form in 2013 and earn vital ranking points on the 2013 World Ratings.

So it is all to play for in both Oleron and Bilbao, as the world's very best athletes prepare to do battle in Europe and it all comes down to the wire. It all starts on the 7th June on Oleron Island for Stop 3 and then continues from the 21st June in the Basque Country of Spain, in the City of Bilbao.

In addition to the World Series Ratings, there is also the prestigious title and awards for the overall winner (Man & Woman) of the 2013 European Trilogy, the 3 event sub series of the 2013 World Series consisting of France, Spain and Germany. ·Official information available at www.watermanleague.com