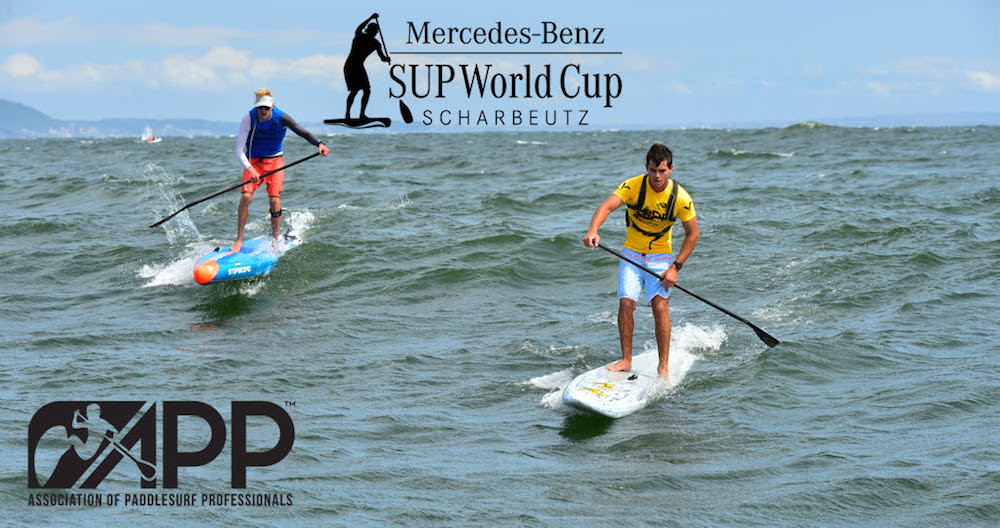 SCHARBEUTZ, Germany - Tension is mounting as we are now just over a week away from the 4th stop on the 2017 APP World Tour, the Mercedes-Benz SUP World Cup. The World's best athletes will descend upon the beautiful seaside town of Scharbeutz in Germany to do battle for vital ranking points at what is the critical midway point of the season on the APP World Tour.

After a spectacular surfing stop on the North Shore of Oahu at Sunset Beach, the Tour moved onto the neighboring island of Maui for the opening race of the 2017 season. It was then onto Japan, where dramatic racing saw a spectacular Title Race develop for the men and an impressive leadership position established for the women.

While there won't be a full live broadcast from the Mercedes-Benz SUP World Cup, The APP World Tour will be running a full social media campaign, driving content from the race together with highlights, recaps and of course their post produced TV show for CBS Sports and other global networks, so plenty of entertainment to come from this dynamic European leg of the APP World Tour season. 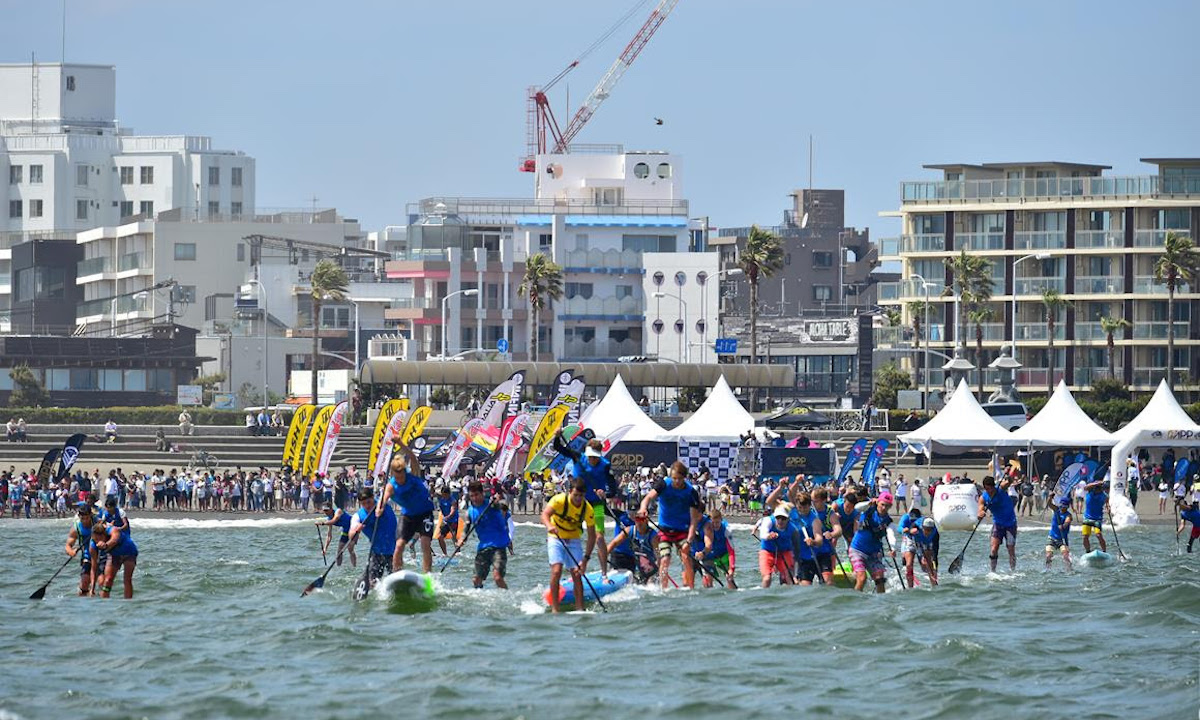 Front runners keep their eyes on the prize while contenders look to stake their claim in the Title Race on this pivotal European leg. | Photo Courtesy: APP World Tour

In the Men's division, Hawaii born athletes Mo Freitas and Connor Baxter will both be wearing yellow jerseys coming into Germany, as they have both secured two sprint and two long distance victories with exactly the same points and positions over the first two events. With the weighting favoring Mo for the event win in Maui and Connor in Japan, Germany will be the equalizer and only one athlete will emerge on top going into the US Open in New York, presented by Hawaiian Airlines (16th - 24th September 2017).

While the two are leading the fleet coming into stop 3, they are certainly not alone, with the ever dangerous Dane, Casper Steinfath (Naish) right on their heels, along with the ever consistent Australian Lincoln Dews and Frenchman Arthur Arutkin rounding out the top 5. Last year's distance winner in Germany, Michael Booth (Starboard) will be looking to continue his strong form in 2017 and secure a repeat performance from last year's racing, while another Australian powerhouse, James Casey is on the rise and will be looking to do damage at this all important stop #4 of the APP World Tour.

Behind these talented top runners, there is a whole host of talent from all over the world looking to assert themselves at this midway point of the season, from another Hawaii resident, Ryan Funk, Japan's leading light Kenny Kaneko and of course leading European lights, Leonard Nika from Italy and Martin Vitry from France. 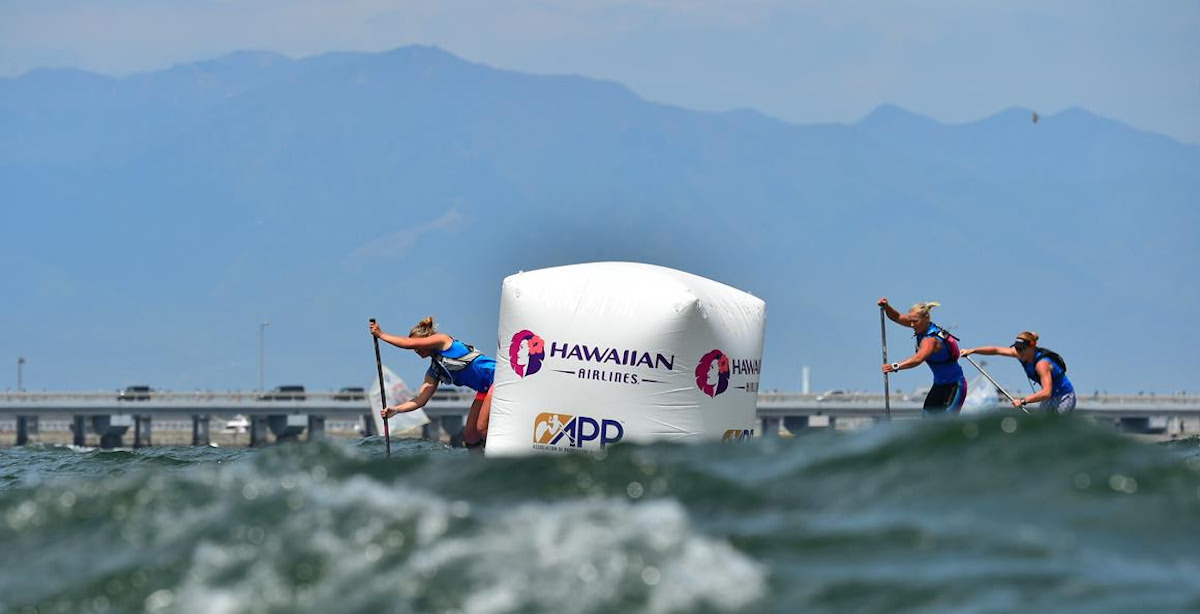 The Women's competition is intensifying as a full fleet of talented athletes will be stepping up to do battle in Germany. | Photo Courtesy: APP World Tour

In the women’s division, it is Terrene Black who has maintained pole position through the first two stops of the 2017 APP World Tour with dominant performances in the sprint racing, winning in both Maui and Japan, together with consistent performances in both long distance races to retain the yellow jersey coming into Germany. However, she is not alone, with the long distance specialist and Sonni Honscheid right on her heels with the home court advantage, together with the phenomenal all rounder and 2016 World Champion Fiona Wylde (Werner Paddles) rounding out the top 3. Right behind Fiona though is Candice Appleby who is well renowned for her phenomenal abilities in all kinds of conditions, along with the young talent from down under, Chloe Walkerdene.

Coming into contention here in Germany is also a dangerous wealth of European talent, from France’s Olivia Piana and Slovenia’s Manca Notar to Spain’s Susak Molinero and Germany’s Noelani Sach. Also stepping up to do battle in Europe will be the leading Japanese talent from the Japan Pro-Am last month, Yuka Sato, who will be looking to continue her great roll in Europe.

Whatever happens, it will be an event to remember, so make sure to stay tuned for all the action to www.appworldtour.com and across social media channels #appworldtour for updates.

US Open of Stand Up Paddling presented by Hawaiian Airlines will take place at Rockaway Beach, New York from 16 - 24 September. 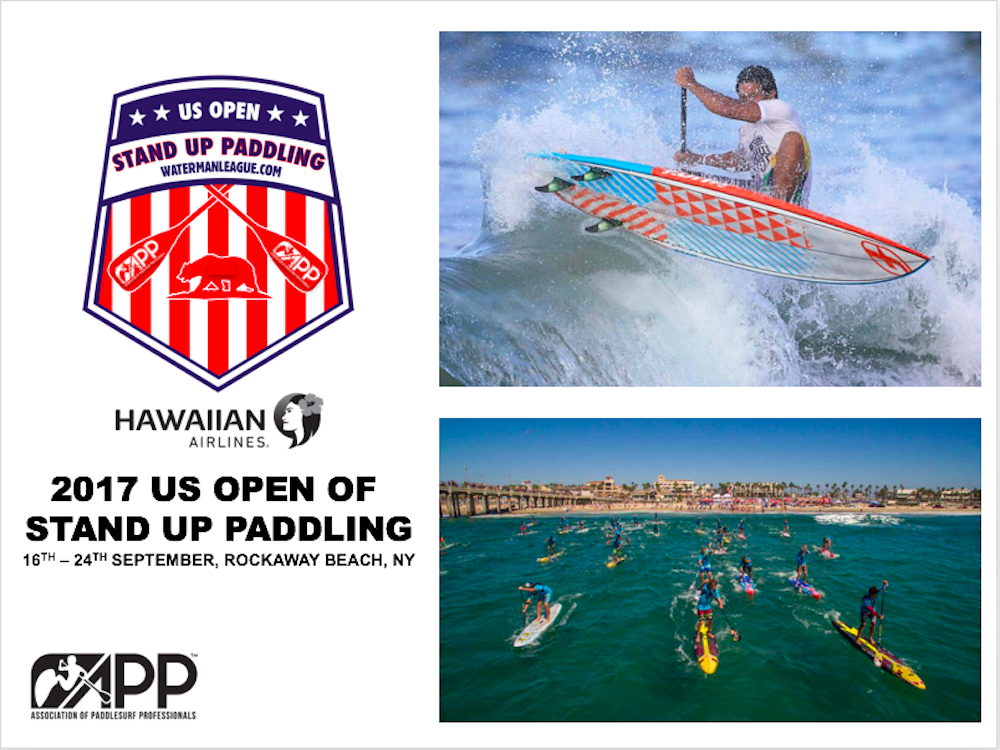 As the most comprehensive event in the world bringing together the World’s very best Stand Up Paddle surfers and Racers, the US Open will serve as another pinnacle moment of the 2017 season, with the sport’s largest event purse and a mixture of World Tour Surfing, World Tour Racing, World Qualifier Series, Amateur and Entry Level Racing, Na kama Kai Youth Clinics to provide an inclusive sporting spectacle and social event to remember.

The first weekend will feature World Tour Surfing and run into mid week, with the option that some heats of the surfing might be held on the final weekend should conditions dictate (complete holding period is the 16th - 24th September).

A full blown Na Kama Kai clinic will then be held at the Cove in Rockaway on Friday the 23rd, providing a protected area for the kids to get out on the water, experience the sport and learn about stewardship of our precious environment. This will also include a major beach clean up presented by Hawaiian Airlines, as well as mass demo activities throughout the event duration.

The event will then climax with World Tour Racing on the final weekend (23/24th September) featuring both Sprints and Long distance racing for the World's best with World Qualifier, Team, Youth, Amateur, and Entry level Racing to provide something for all ages and levels at the 2017 US Open of Stand Up Paddling presented by Hawaiian Airlines in New York. The whole event on the water will be complemented by a full social schedule on the land, with high profile opening events, movie screenings and parties throughout the event's duration so it will be an action packed week in Rockaway Beach, New York.

Make sure to save the date (16th - 24th September) and stay tuned for more on the 2017 US Open presented by Hawaiian Airlines at www.appworldtour.com 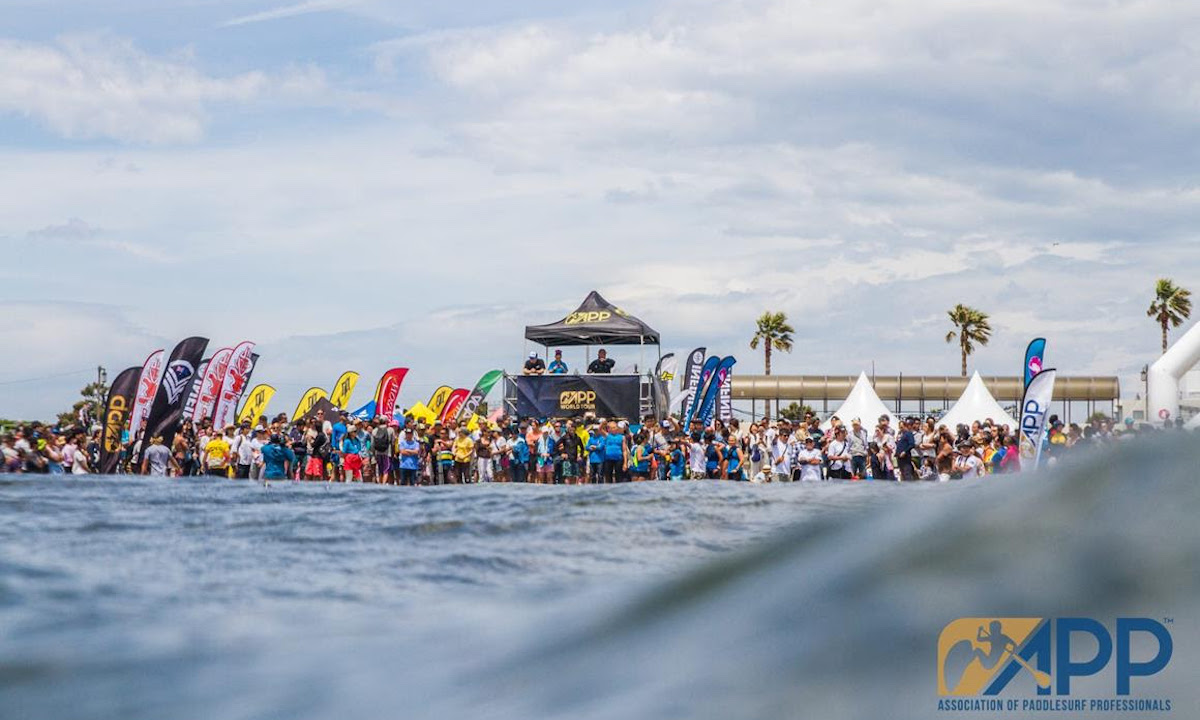 The APP World Tour is proud to have Hawaiian Airlines as its Official Airline for the 2017 Season, connecting the World with Hawaii via its N. American, Asian and Australian routes. The APP World Tour produces a complete inventory of programming, including live and post produced broadcasts from all its events, with distribution to over 100 countries worldwide via premier global networks such as CBS Sports and Fox Sports Australia, supported by IMG Media.