My Local Lineup is launching an all stand up paddle TV show, airing new episodes every month and featuring all SUP modalities 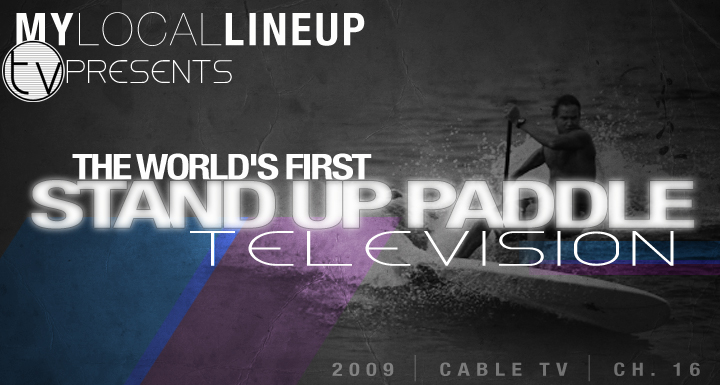 San Diego, CA  – Starting November 2009, My Local Lineup is featuring a television show on Cable TV all about stand up paddling. The show will cover all modalities of the sport, including surfing, flat water, white water, and whatever else there may be SUP. Stand Up Paddle Television will air every third week of the month on Cable TV, iTV San Diego channel 16, on both Timer Warner and Cox Cable. Times include: Mondays at 7pm, Fridays at 6:30pm, Saturdays at 8am, and Sundays at 5pm in all of San Diego County and Mondays through Fridays at 12am in all San Diego but North County.

Stand Up Paddle Television will cover a barrage of topics, including standout athletes, different SUP sub-cultures, popular destinations, industry force, innovations, and more. The thriving popularity of stand up paddling has driven performance to new levels from the shores of Southern California and Baja to the bone-crushing barrels of Pipeline and Teahupoo. In each one of these different coastlines and patches of water, esoteric cultures of stand up paddlers have emerged, some following the beach boys school of an effortless ride, others committed to the daredevil drive to drop in gigantic swells and jump off the edge of rocky waterfalls. But regardless of the modality, the demand for cutting edge and high-performance equipment is constantly thrusting SUP technology on new frontiers, whether it be on long distance boards, surfing sticks, or paddle design.

That’s where Stand Up Paddle Television comes in. We’ll chase the top performing athletes, delve into different sub-cultures, and examine the technological nuances of equipment. Debuting out of the heart of Southern California, we’ll navigate through myriad SUP hotbeds, from bays to beach fronts, and explore the ins and outs of different destinations. We’ll pick the brain of the creative minds behind this explosive industry and probe into the discoveries and innovations that continually push performance forward. Mark your calendars for the third week of every month, set your DVR’s, and be ready to embark the tour of the World’s First Stand Up Paddle Television Show on My Local Lineup. (For advertisement opportunities, contact [email protected] .)

ABOUT MY LOCAL LINEUP TV

My Local Lineup TV is San Diego’s Only Surf TV Show and it airs all surf, all new episodes every week. It covers everything from contests and industry to lifestyle and more. My Local Lineup TV runs on Cable TV, iTV ch. 16, on both Timer Warner and Cox Cable. Episodes air 9x a week, each time reaching nearly 900,000 homes. It runs Mondays at 7pm, Fridays at 6:30pm, Saturdays at 8am, and Sundays at 5pm in all San Diego County and Mondays through Fridays at 12am in all San Diego but North County.


ABOUT MY LOCAL LINEUP MEDIA

My Local Lineup is an action sports multimedia company based in San Diego, whose trademark is its all-inclusive and locally oriented approach to California’s water sports, more particularly Southern California surfing. By covering every surf modality and accounting for the social dynamics of surfers, the company aims at a portrayal of the sport that intimately resembles lineups and surf communities. My Local Lineup is Online at http://mylocallineup.com and on TV on iTV channel 16 in all of San Diego County.

More in this category: « The Wake Up Sup Show LIVE Time is Running Out and the Competition is Fierce »