The U16s went first which was contested on 12’6” Inflatable race boards.

BOSCOMBE BEACH, United Kingdom - Round 3 of the UK SUP Clubs National Series was held at Boscombe Beach on the South Coast of the UK. With its nine miles of golden sand, piers and surf schools, it lends itself well to a technical race but also great day out at the beach.

Conditions here could be anything from flat and sunny to rough and stormy but this year we were able to get the rare combo of sunny and rough.

This was to be the first Red Paddle Co Junior Series race of the year. The conditions could not have been more challenging. With competitors as young as eight the windy conditions and waves looked like they might keep the juniors ashore. After looking into the possibility of a downwinder it was finally settled as a series of survivor style beach sprints.

The Under 16's went first which was contested on 12’6” Inflatable race boards. Luca Meldrum (Lagoon Watersports) showed skill and class all the way through, first to his feet and catching waves and bumps and on the way in he took three bullets in the competition. Emily Crawshaw and Lewis Quinn-Bower (Bray Lake) filled the rest of the podium and despite normally paddling inland copped exceedingly well in the rough stuff.

The Under 15's were the biggest fleet competing on 10’6” Max Races. Three races were needed to separate out the racers into final results. Izzy Adcock (The Watersports Academy) took two bullets and a third place to win the event overall, as well as first female. She just held off a consistent Luke Wharton who was first male, with Zara Horton (The Watersports Academy) and Poppey Sawyer completing the podium for the girls and Todd Sawyer Runner up to Luke. 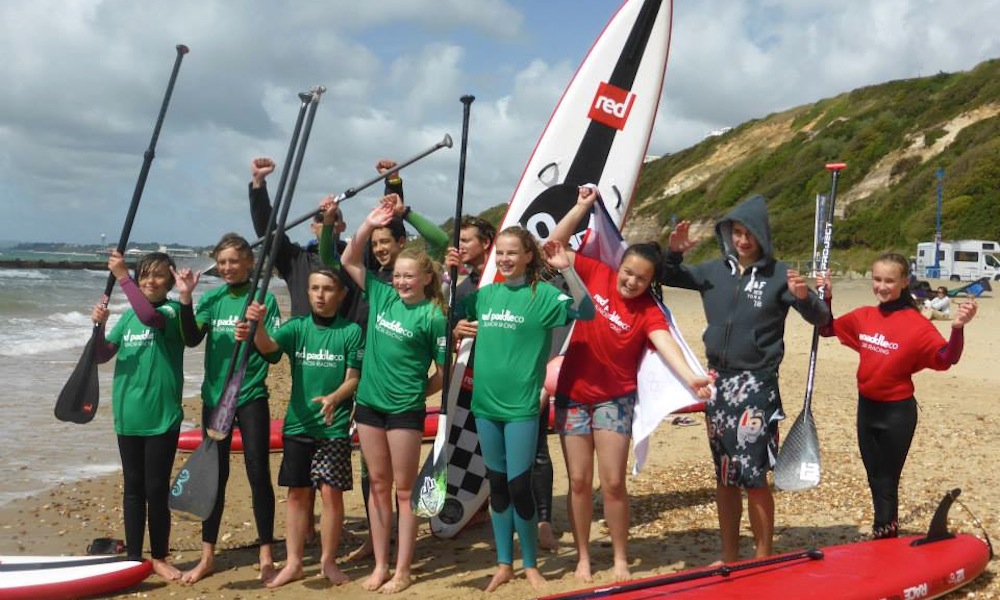 The Under 12's were probably the most impressive in the conditions.

The Under 12's were probably the most impressive in the conditions. With only a small fleet they raced against the under 15's. Samuel Thomas (Bray Lake) showed his potential by winning a round against the whole field; not to be outdone, Lottie Smith (Suffolk SUP) posted a second place showing that these two young paddlers could scalp a few of the older paddlers in events to come.

The Juniors did an awesome job and I can’t wait to see them at the next races where they’ll be able to perform even better in less challenging conditions.

Once the Junior racing was done and there had been some adjustments to the course, the 12’6” racers were off. This was a great race to watch as it looked like a scene from the film 300, paddlers throwing themselves against the elements. Despite the conditions being most peoples main opponent, there were still some great battles going through the field. Whilst Paul Simmons led the field followed by Andy Joyce, Damien Warner managed to hold off challenges in depth from Ben Fischer, and Mo Guy who did amazingly despite paddling on a flat water board. One of the closest margins was between regular sparing partners Zac Wharton and Colin Elston who were inseparable around the course. Some great surfing from Zac on his Red Race saw him snatch the lead.

In the ladies 12’6” race Marie Buchanan made the conditions actually look fun, and whilst Kerry Baker pushed Emily King all the way, Emily pulled away on the last lap to secure the higher spot on the podium.

James Monti won the surf style class and it was hard to separate him from those on race boards. He looked great in the surf and seemed to be working his way through much of the race board fleet.

Find a SUP event near you! Check out the Supconnect Events Calendar.

After a short break the 14’ and Nisco fleets lined up to race.

After a short break the 14’ and Nisco fleets lined up to race. This was where I got my chance to have a go. It was great to see two other 14’ Elites in the line up. Buoyed up from the Junior Racing earlier, I was keen to get a fast start and duly face planted off the other side of my board. Luckily the conditions had slowed most of the other competitors starts down and by the time I had got a few decent strokes in I was sat in third on the way to the first mark and cursing having helped Carl Thomas get hold of a Red 14 as he was in front of me.

I had a good mark rounding and began the grind upwind where I managed to pull ahead of Mark Slater on the way to the top buoy. Grind, grind and grind some more was the order of the day upwind. Try to miss as few strokes as possible and stay standing. 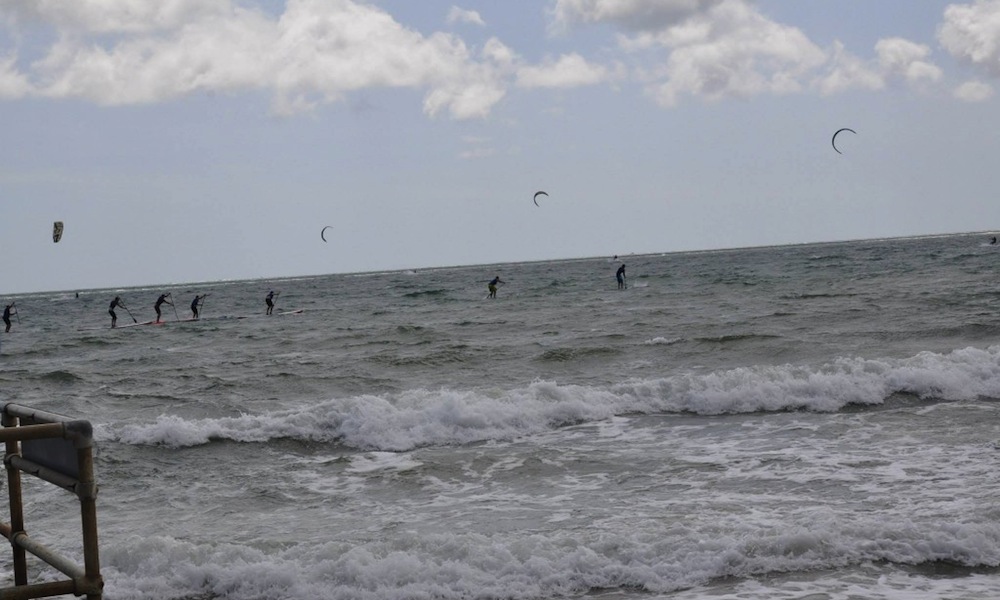 Grind, grind and grind some more was the order of the day upwind.

Once getting round the top two marks the downwind was at a great angle with some epic runs but a few splashes. It was here I could see the rest of the field battling it out. This was far from a processional race. Mark Slater and Rob Stewart were gripped in a fierce battle with the lead changing hands a few times in lap one, where Carl Sawyer, Carl Thomas, Ben Bailey, Ben Payne, Will Vincent and Tim Harley all led the chasing pack at some point. 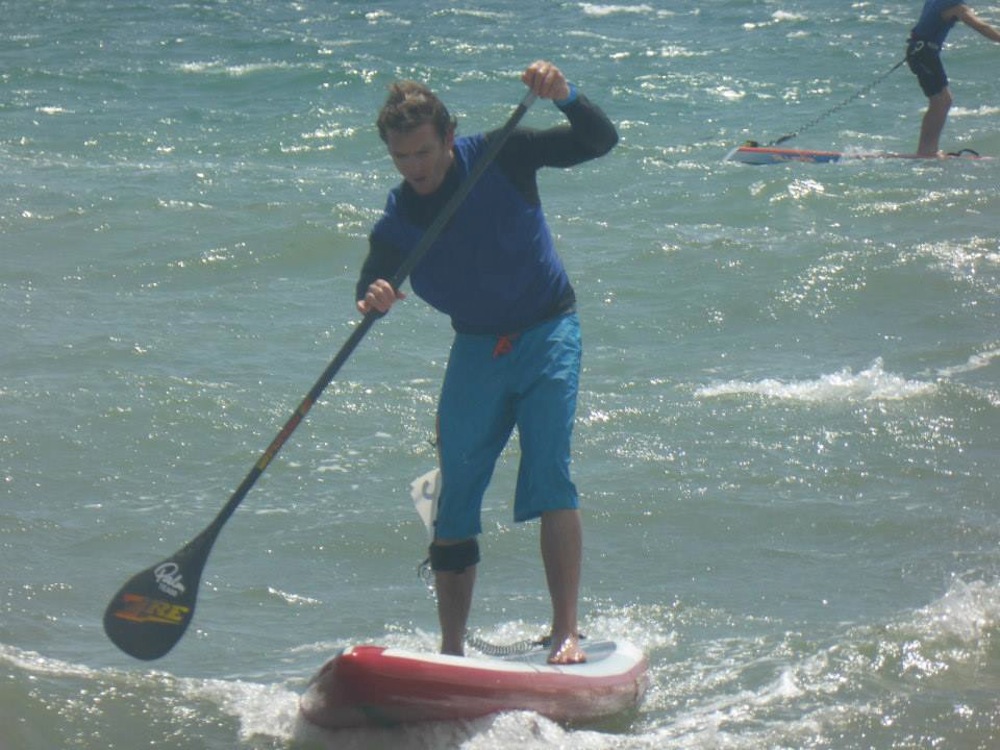 I felt pressure from Mark on lap two but managed to calm down a little and paddle better and start to enjoy myself on lap three. It was great to take the win but I feel most of my result was down to kit selection above anything else. When the weather gets rough the Red’s really get going in comparison to their hard board counter parts. It was great to watch the ensuing battles with Tim Harley and Carl Sawyer changing position three times from the last two buoys leading Tim to win the sprint up the beach. Ben Payne had to keep hold of his board to get in only three seconds ahead of Will Vincent. It was great to see the two Carl’s pilot the other two Red’s so well, especially as Carl Thomas does almost all his paddling on a lake.

In the ladies Tarryn Brown could well be one to watch, taking the win over Christine Anderson in a time that would have put her right up in the mix with the men! In The Nisco Fleet, Alex Tobutt took the win, with Timothy Paul and Pete Vale filling the rest of the podium, in some of the most challenging conditions of the day. 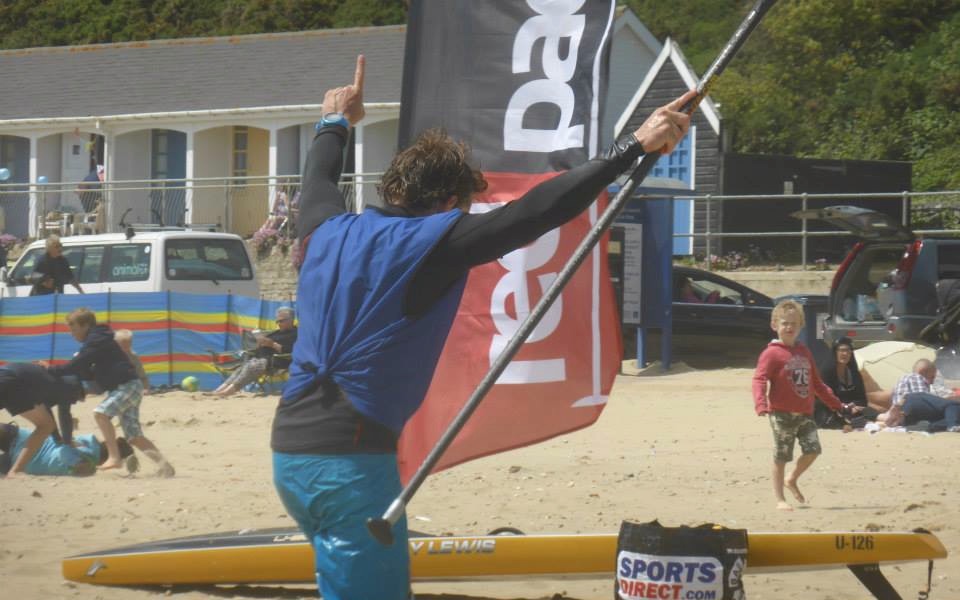 Sam Ross coming in for the win.

It was a great day for me and not just because of the Race win, but the Junior’s on their Max races and Elites really stood out as the stars of the show. It was also great to see Red’s in every fleet and starting to get the belief that these may well be the best bits of kit for the rough stuff.

Big well done to all the parents, competitors, organizers, and volunteers for a great day in challenging conditions. 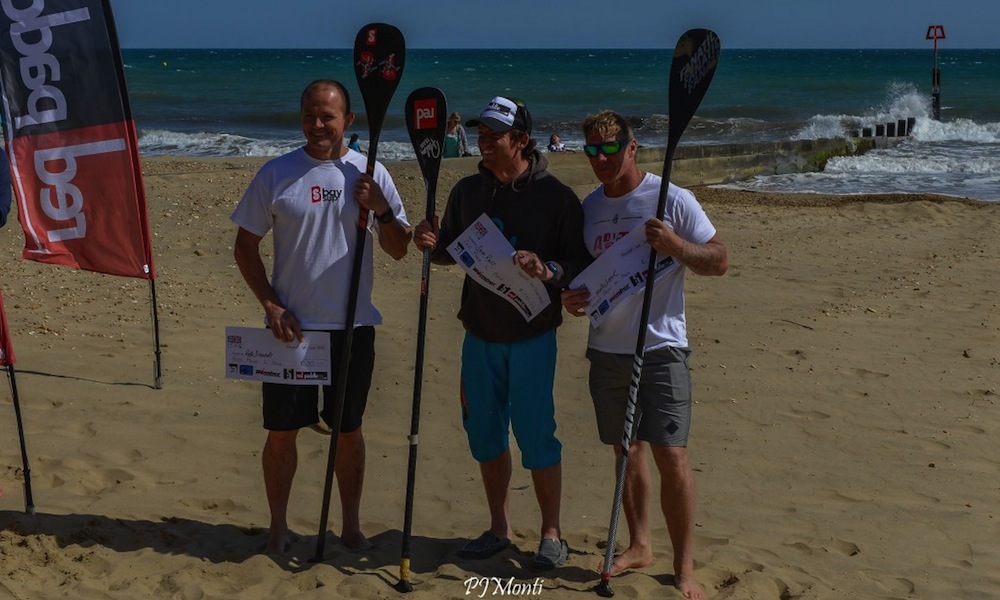 Thanks to Paul Monti, Georgia Wharton and Simon Liu for the photos.

To see more SUP race news from around the world, click here.