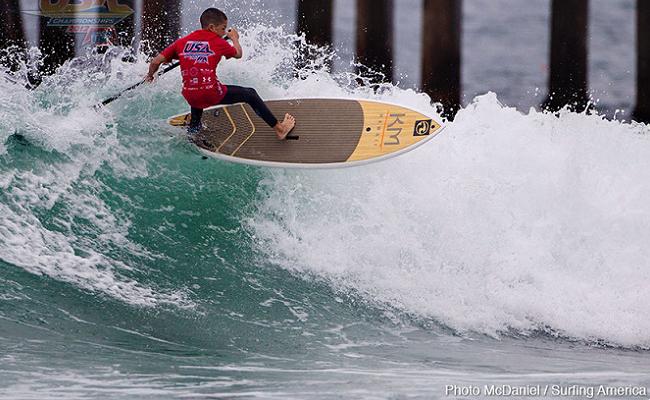 Chris Bluthardt had the most votes in the open nominations phase of the SUP Grom of the Year Contest.

SAN DIEGO, California - The first phase of the 2012 SUP Grom (Kid) of the Year Awards came to a close last Friday night at midnight pacific standard time.  Thank you to all of you who took the time to support the grom of your choice and to make this a great event for them.  As indicated, the five athletes with the most votes have automatically moved on the the SUP Grom of the Year final.  Some have received honorary advancements while other groms earned a pre-seeded placement.

So let's share the results right away! The top 5 groms with the most votes from the open nominations who have automatically advanced to the final are:

A huge congratulations to all of these groms for being part of this elite group of kids.  Each one has been truly inspiring on the water but has also worked really hard to do well in this nomination process.

Along with the automatic advancements, four other groms have received honorary positions in the final based on several criteria such as their performances, skill level, ambassadorship, grassroots involvement in stand up paddle, stoke and the effort they put forth in this contest.  These groms are 1. Annette Garcia, 2. Kristi Page, 3. Grace Farley and 4. Mo Freitas.  The nine groms mentioned above will also join 21 other groms who will be contenders in the 2012 SUP Grom Final which just began yesterday!

The final will run from September 1, 2012 through September 30, 2012 and end at midnight pacific standard time. Voting will start at zero for every contender, however this time the winner will not be exclusively determined by vote count.  The selection criteria is multi-faceted and will depend on the following:

1. Ambassadorship:  Conveying the cheerfulness and inclusiveness characteristic of the sport.

Good luck to all 30 SUP Groms. It will be fun to watch and see who becomes the 3rd annual 2012 Supconnect SUP Grom of the Year!  See all the contenders and place your vote here: Sup Grom of the Year

SUP Photo of the Year:

Start Voting! Vote for the SUP Grom the the year here