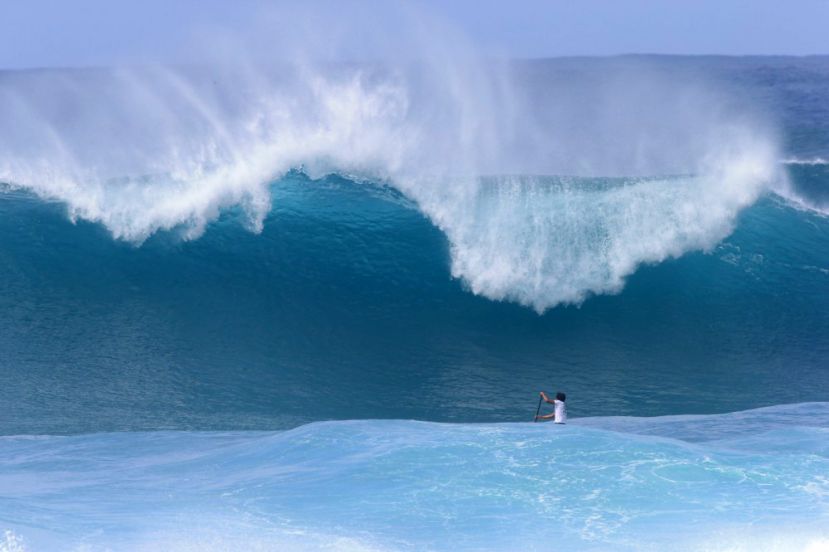 OAHU, Hawaii - The first stop of the 2015 Stand Up World Tour kicks off in big surf and light winds at the #SunsetBeachPro on the North Shore in Hawaii. After strong off-shore winds prevented organizers from running on the first two days of the waiting period, winds eased off and 10-15ft waves swell hit the North Shore of Hawaii. World Tour Director, Duane Desoto & Waterman League CEO Tristan Boxford gave the green light for the Trials to get underway here at Sunset Beach.

With the top eight trialist's progressing through it mean't there was definitely fierce compeition in the opening heats. 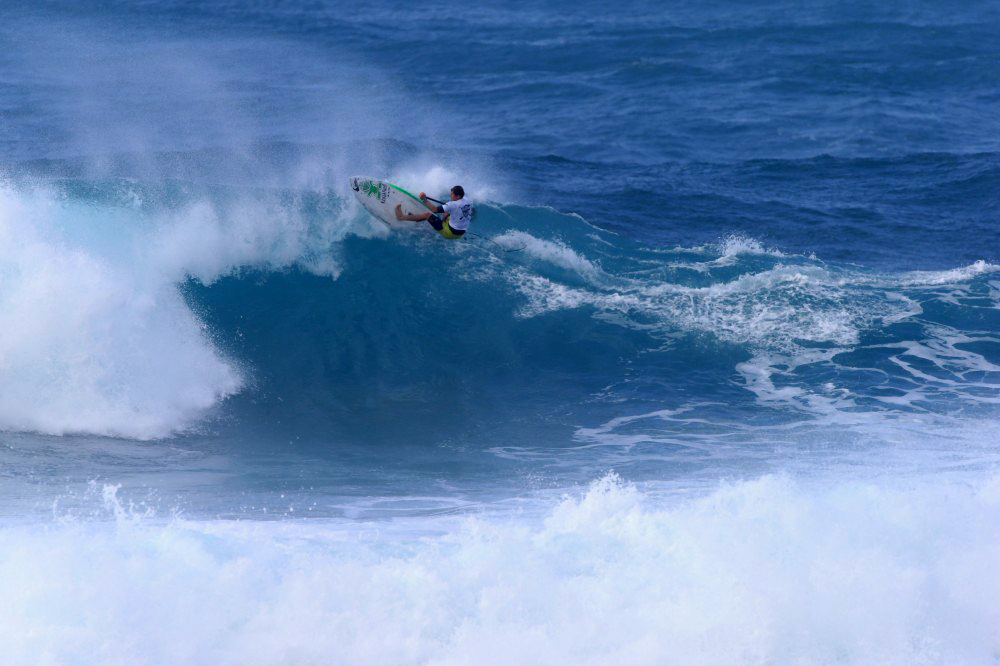 Justin Holland (Starboard) scored the highest heat total (14.17pts) on Day 1 of the Main Event to progress straight through to Round 3. Coming back from injury, missing the last two #SUWT 2014 events, the Australian started his 2015 campaign strongly with some impressive surfing, scoring an 8 on his first ride. Justin's wave selection was impressive picking to ride just 3 waves, making sure he secured two scoring waves as he went straight into Round 3.

Kai Lenny (Naish) surfing in Heat 1 as well, posted the second highest score of the day (13.66). Winning the 2014 #SUWT Championship, Kai open his 2015 account with some strong manoevers using his power to impress the Judges. Picking up 8 waves in Round 1, Kai just couldn't find that excellent range wave to top the Heat, but progresses straight into Round 3. 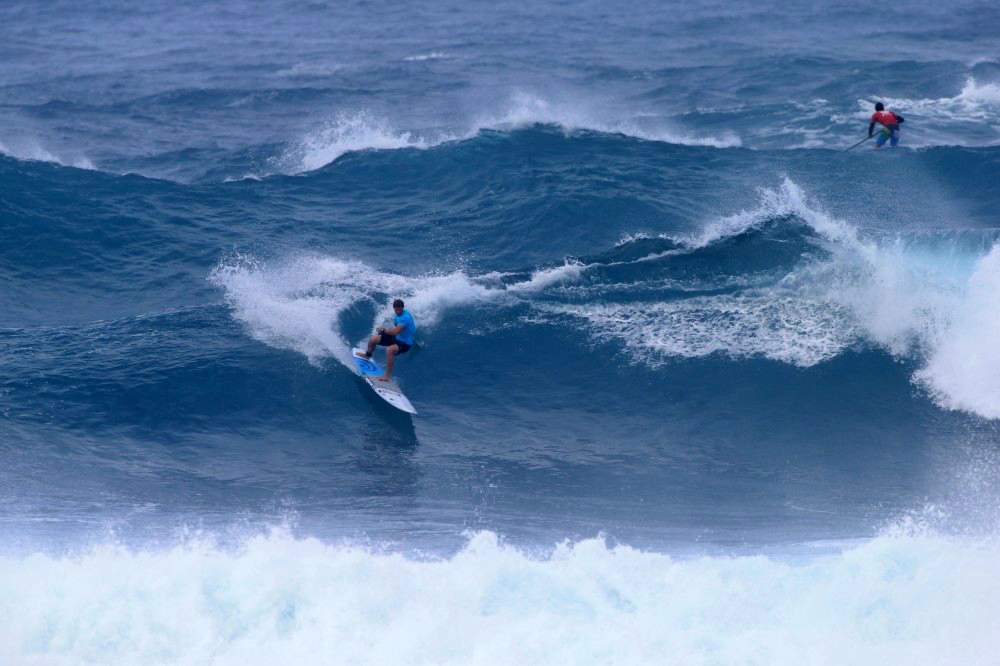 Josh Riccio shined in the Trials to make it into the Main Event. | Photo: Brian Bielmann

Josh Riccio (Rogue & 27N) scored the highest single wave of the day (8.27) as the American dominated the trials and earned his place in the Main Event. After focusing on his training throughout the winter on Maui the Judges awarded his style and flair with some excellent scores. We will wait with anticipation to see how he performs in the Main Event

Julien Bouyer (Naish) also excelled in the Trials. With a fluid style and power off the lip, the frenchman looked comfortable surfing here at Sunset. After surfing two rounds in the trials he had to head out for a third time for Heat 1 of the Main Event. Up against Kai & Justin he could only manage 4th place. The youngster earns a very well deserved nights sleep and will have another chance to progress in the Repechage heat when competition resumes.

Another standout performance in the Trials was Austin Kalama. The youngster from Maui grew stronger throughout the heats, finishing third place in Heat 1 of Round 1. In the second round of the Trials, Austin showed his real surfing talent and provided some great entertainment to the Sunset beach crowd finishing in first place and proggresing through to the main event. We look forward to watching him take on the best of the best in the Main Event. 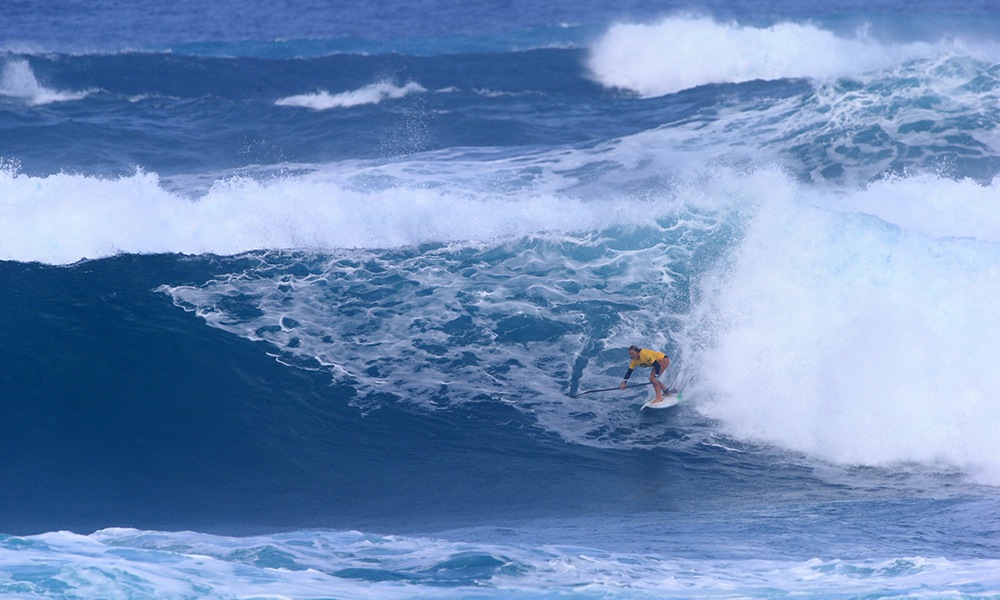 Stand Up World Tour Women's Champion Izzi Gomez alongside Starboard team mate Fiona Wylde entered the Men's trials event and both excelled. Fiona, who turns 18 this month, gave herself an early birthday present, as the youngster from Oregon showed she could match the guys and progessed into the Main Event demonstrating her excellent surfing skills. Izzi, who is just 15, and the youngest ever World Champion, showed massive determination and guts to paddle out into some pretty heavy sets. Giving the guys a run for their money, she just couldn't find a backup wave in her second heat to progress with Fiona.

Check out the highlights, galleries, news and much more at www.watermanleague.com