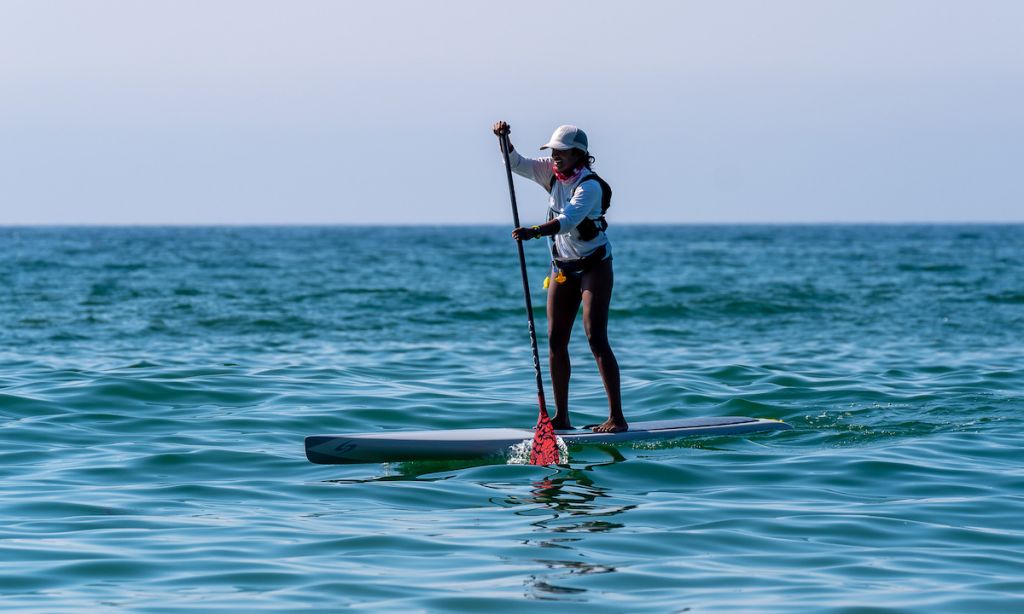 SANTA MONICA, California - On October 3, 2020 marine scientist and ocean conservationist Anupa Asokan paddled and completed the 27 mile SUP across Santa Monica Bay to raise money for the Surfrider Foundation and bring awareness to some ocean issues. Anupa ended up raising over $10,000 for the cause. We caught up with Anupa to talk about what inspired her to complete this trip, her planning/prep, unexpected encounters and more! Check out our interview with her below:

Tell us a bit about yourself and your background in standup paddling.

I grew up in Florida and came to love the ocean by spending weekends fishing with my dad on the Gulf Coast. I later went on to study oceanography, and have since worked in marine science and policy for over 10 years. I started stand-up paddling during my first job after college--- teaching marine science on Catalina Island, California. There was an old windsurf board lying around and a broken kayak paddle that someone had added a PVC pipe piece to for a handle. In my time off, I would use it to paddle around the kelp forest and to a nearby cove to look for leopard sharks. I love standup paddling because it gives you a better point of view to look for marine life than other forms of paddling. Eventually, the program I was working for got a set of SUPs and I was introducing kids to stand-up paddling along with teaching our marine science program.

What inspired you to take this 27mi paddle?

I joined the National Board of Directors for the Surfrider Foundation earlier in the year and had been thinking of ways to support the organization. With many things shut down, I found myself paddling a lot more than usual this summer and after a few 10+ mile adventures, I thought, why not turn this into something positive?! I raised over $10,000 (so far ;) ) to support their important work protecting our ocean and coasts and making sure everyone can continue to access the beach. 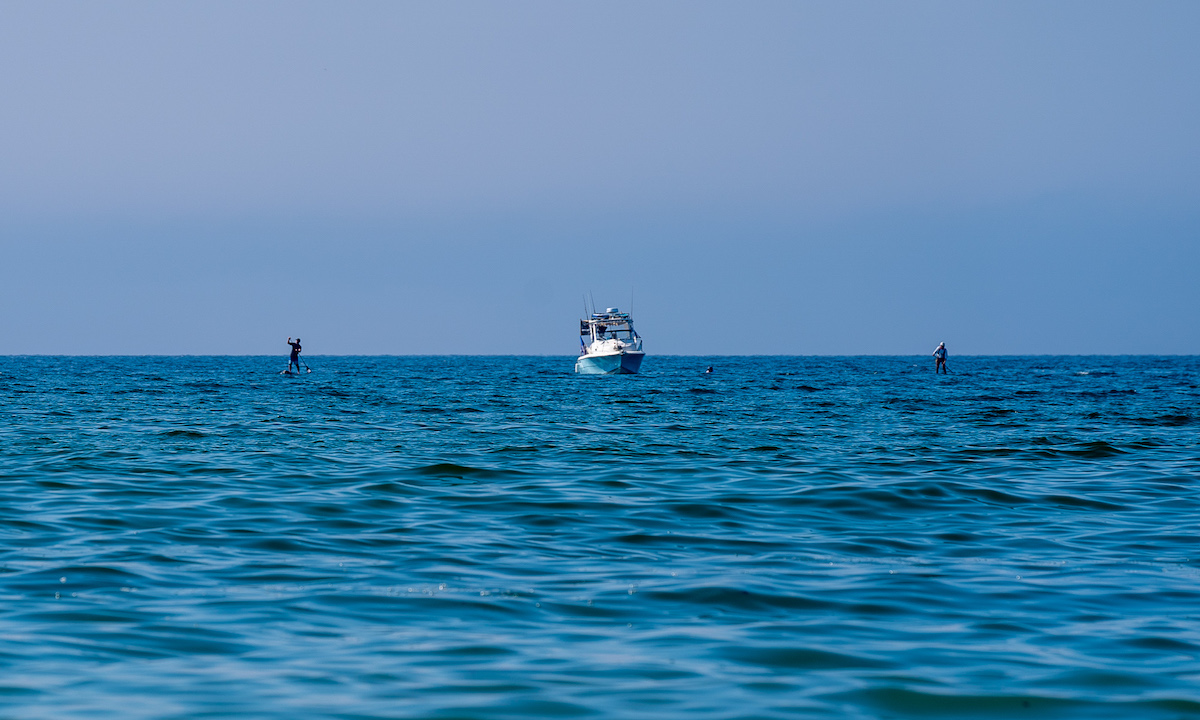 How'd you decide on your location/route?

In Southern California, most people do a crossing from Catalina Island to the mainland for fundraising paddles like this. But since I wasn't sure what my support situation would look like, I decided to pick an option that would allow me to have access to the coast if needed. Pt. Dume to the north and the Palos Verdes peninsula to the south make up the Santa Monica Bay along the Los Angeles coastline, so I thought I'd take on this less-common route where I could also hug the coastline if I wasn't able to find a support team.

How did you plan for the trip and what was the preparation like?

I've spent plenty of time on the water to know what to prepare for as far as conditions and safety, but I've never run a marathon or done any long-distance physical challenge like this before, so "training" just meant I did what I could to feel confident in my technique, abilities and gear. In the months leading up to my event, I did at least one 8-10+ mi paddle per week and cross-trained with weights, HIIT, yoga, and hoped for the best! 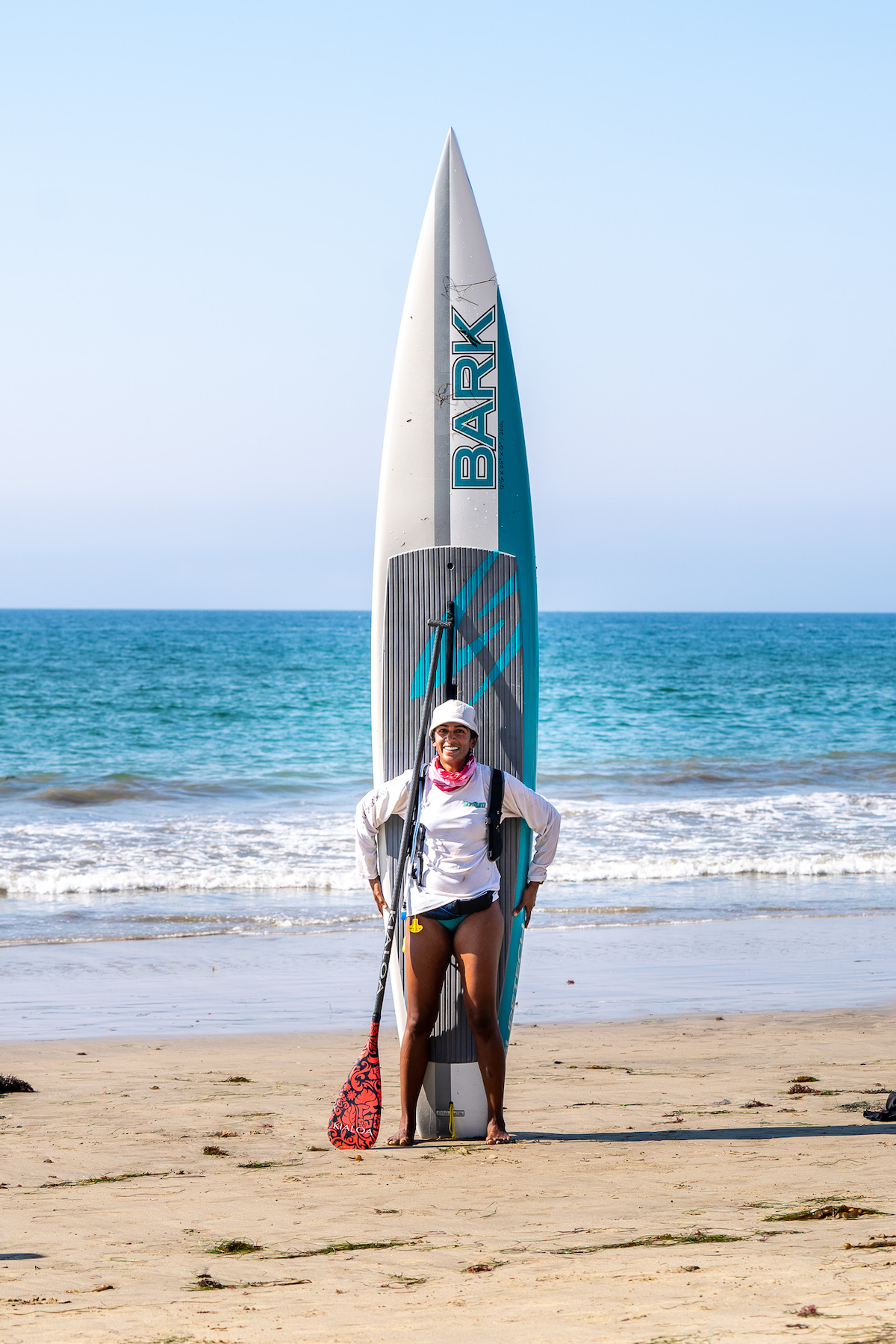 What gear did you take/use?

I was on a Bark/Surftech Contender-Lite 12'6" board with an old carbon Kialoa paddle I love and have been using for years. I only trained on the narrower Bark board for about a month before the event. It took some patience, but I improved a lot in a short time and cut about 4 minutes off my mile compared to a planing hull board I had been using.

Were you solo? Unsupported?

I chose a route that would allow me to be closer to shore if I wasn't able to secure a support boat, but it would have been a much longer paddle if that was the case. I'm so grateful to my support team! They kept me motivated and carried extra food and water for me. My good friend who did several training paddles with me tagged along intending to only paddle part of the journey, but ended up coming along the entire way!

What safety measures did you take?

The support boat was my biggest contingency and feeling confident in their water skills really helped put me at ease. I had a marine radio and a whistle to hail them if needed, and even though they stayed close-by, I wore an inflatable PFD belt just in case.

How long did it take you? What was that like?

I was hoping to complete the paddle in under 8 hours, but I came in around 8.5. I'll blame the headwind I encountered for the last 10 miles or so :)

What was the best part of your paddle?

The first two hours were amazing. I was making great time at around 5 knots with glassy conditions and the swells in my favor. I started by moonlight, caught the sunrise with a pod of dolphins, and rounded out mile 8 with fin whales!

What was the worst/hardest part of your paddle?

Right after I saw the whales, I encountered a thick fog bank. I asked the support boat to run ahead of me and had to rely on following the sound of the engine for several miles, along with keeping track of the swell direction. After the fog cleared, the wind picked up a bit. It wasn't ideal, but it could have been a lot worse. It was a headwind at a slight angle, which slowed me down and also kept me paddling on my weaker side for the last 9 miles. The chop it kicked up was also parallel to my direction making it harder to balance. But ultimately, it was a beautiful day and the extra challenge added to my sense of accomplishment at the end! 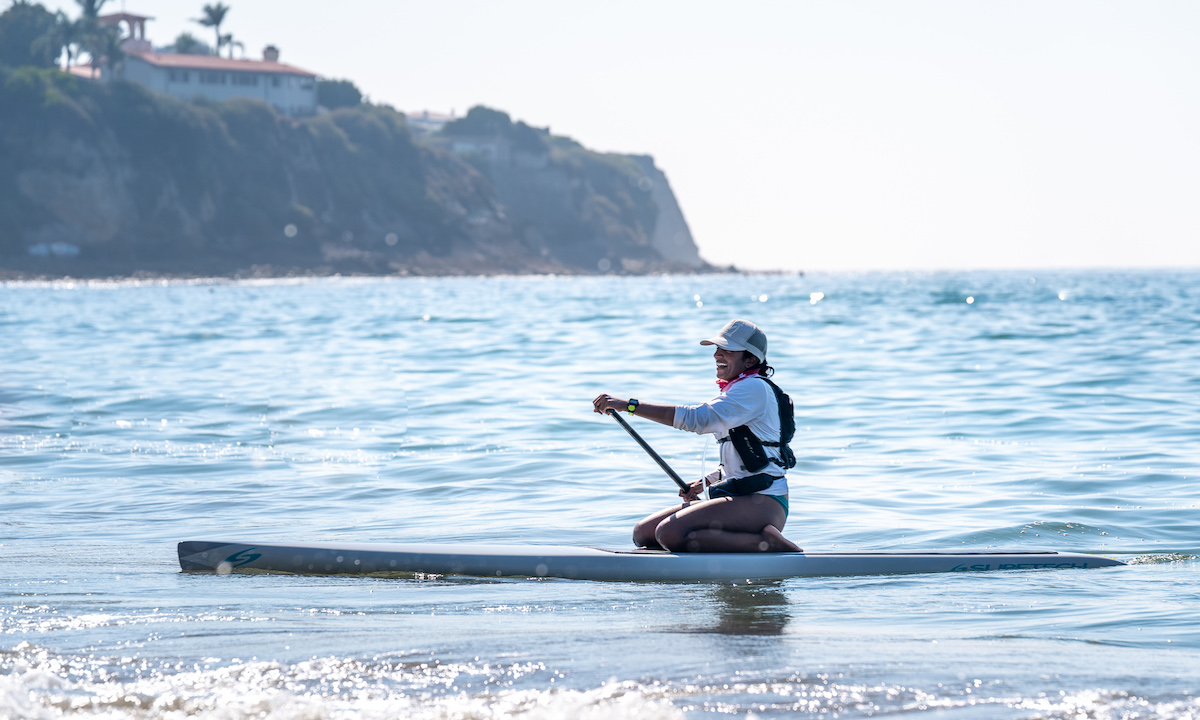 Anupa all smiles as she finishes 27 miles. | Photo: John Suhar

Would you do it again?

I would! I'm a marine science nerd and I'm passionate about ocean conservation, so I turned the attention around my paddle event into a teachable moment, both on the marine life found in Southern California and the issues facing local ecosystems. The folks supporting and following along on social media loved that part of the journey and got super invested in me seeing animals from my bucket list along the paddle. I still haven't seen a basking shark, which was my number 1, but I'm so stoked that I saw whales!

I'd love to turn this route into an annual fundraising event or paddle race for Surfrider in the future. For a new personal challenge, I'd also love to take on a different body of water, both for the experience and for the chance to learn and encounter some new ocean critters. I'm considering Florida Bay next if there are any takers who want to join me!

Anything unexpected that you encountered that you weren't prepared for?

It had been years since I visited my chosen launch point. I didn't get up there to really scope it out again before the paddle, and was surprised to find the route down to the beach was pretty much gone. Ooops! LUCKILY, I put my board on the support boat the night before, because there was no way I could've gotten down there with it in hand. I ended up scrambling down the cliffside by flashlight to get to my launch spot and thankfully, got the unexpected surprise out of the way before I started.

To donate to the Surfrider Foundation through Anupa's cause, click HERE.