Zane Schweitzer paddled through jetlag and lost luggage to take an impressive win | Story and images from Watermanleague.com

BILBAO, Spain - Zane Schweitzer (Starboard) arrived at night on Friday, without his boards and paddles to take part in this weekends event and traveling all the way from Tahiti. Despite the borrowed board and paddle and travel exhaustion, Zane put on a strong performance on Day 1 to secure an impressive 3rd place in the Sprint Racing, especially considering the caliber of the competition.

On Day 2 and after a full night of rest, Zane was the life of the Race, and battled it out with a tight front pack for the entire duration of the race, making a break for it on the final stretch to take the much deserved win in the long distance race, and in doing so, the overall event Title here in Bilbao. An incredible performance from the young talent from Maui, who has been on an incredible run this year, currently lying in 3rd place overall on the World Series and showcasing this weekend in Bilbao, that he is more than capable of winning against the best of the best. 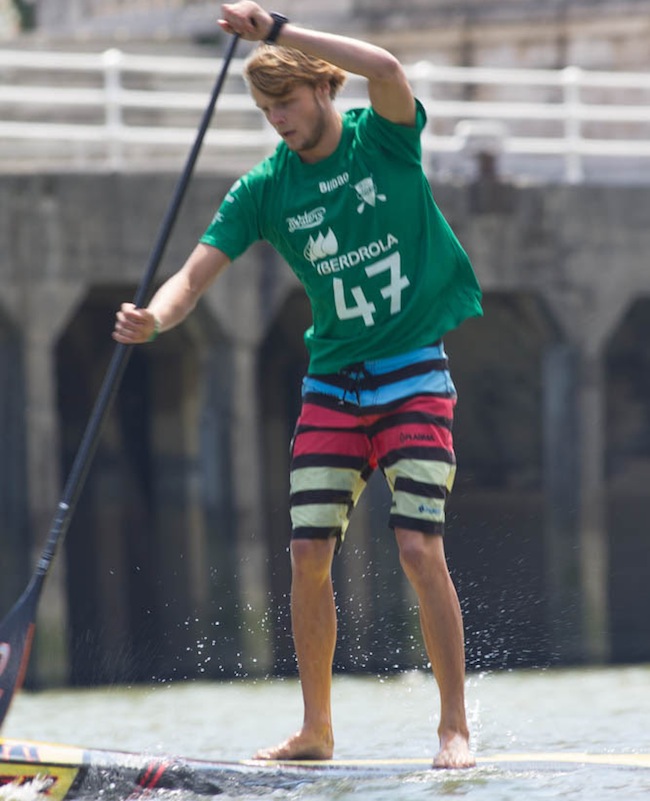 Casper Steinfath (Naish) was on a high this morning, coming off his win in the sprint racing yesterday, but by no means took his foot off the gas. In an incredibly competitive long distance race, Casper was in the front pack throughout, battling for position and gunning for the victory.

Coming into the closing leg, he was still in the leading back, but not up front enough to secure the overall victory here in Bilbao, have to settle for 6th place in the long distance, but an impressive 2nd place overall for the event in Bilbao. A strong performance from the young Viking and definitely reinforcing his standing as one of the World’s leading paddlers and keeping him always in contention.

Jake Jensen battles to the end, finishing in a close second in the sprints, 3rd overall 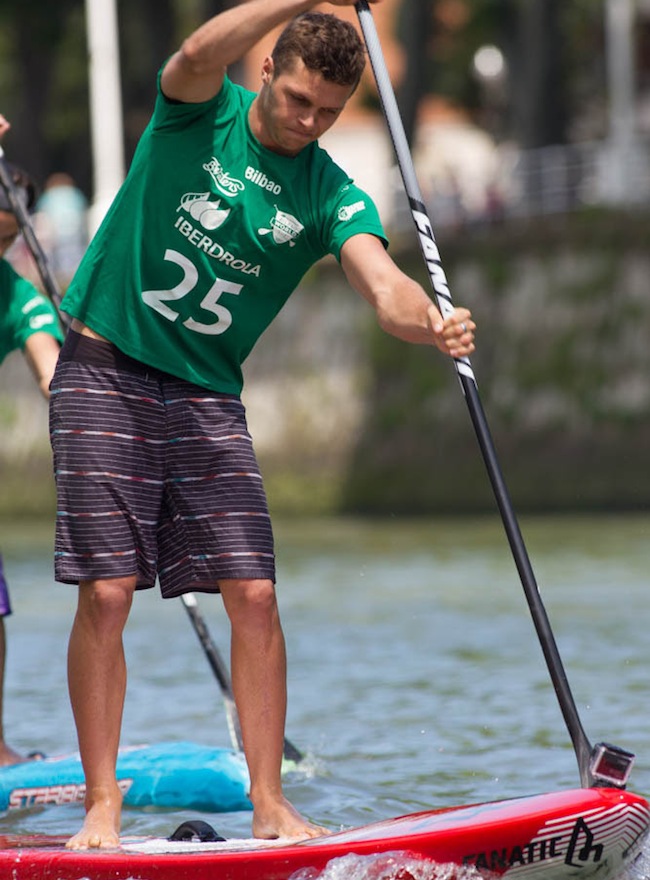 Jake Jensen (Fanatic) had only one thing on his mind this morning as he paddled out to the long distance start in front of the dramatic backdrop that the Guggenheim Museum provides: redemption. Making it all the way to the Finals of the Sprint Racing only to suffer from a broken paddle on the opening leg was enough to fuel the competitive fire. From the start, Jake was in the leading pack and for the most part, the top 3, battling for position throughout in his quest for victory.

While he had to settle for 2nd in the race to the finish against Zane Schweitzer (Starboard), Jake put on a great race and demonstrated that he is dangerous in all conditions, from flat water to open ocean, and is a prime contender for the World Title in 2014. His 2nd place finish propels him into 3rd place overall here in Bilbao.

Titouan Puyo (Starboard) from New Caledonia is a newcomer to the World Series, but has been making waves this year at various events in Europe and beyond and is a real talent to look out for here on the World Series. Making it all the way to the Finals of the World Series Sprint Racing, Titouan posted a 5th place, and improved on that today with an impressive 3rd place in the long distance race giving him a worthy 4th place overall for the event.

While points were tied with Jake Jensen, as with all World Series and Challenger Series events, a tie is broken in favor of the athlete with the single higher result (in this case Jake with a 2nd place in the Long distance). So a great performance from thius young talent from New Caledonia and we are excited to see him as we progress through this year on the World Series, first off, next weekend in Oleron Island, France. Make sure to stay tuned to www.watermanleague.com

Leonard Nika puts on another impressive performance in Bilbao 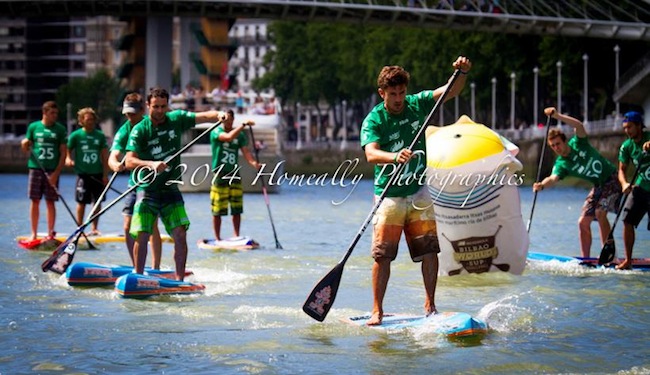 In 5th place it was the Italian Stallion, Leonard Nika (Starboard) who once again demonstrated his ability and top level competitive performance here in Bilbao, with a 4th place in the sprint racing and a 5th place in the Long distance.

Leonard continues to go from strength to strength on the World Series and is one of Europe’s leading paddlers, as he continues to make his presence felt on the World Series. He will also be looking for a strong finish on the European Cup, as it will all culminate in his home town of Rome, Italy, or more specifically Severe Beach from the 25th – 27th July….definitely a Race not to be missed!

Bilbao: a World Class Destination for Stand Up Paddling and An incredible City 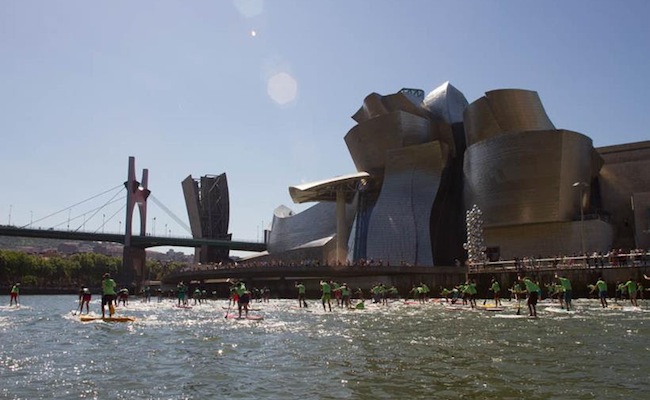 Bilbao has once again showed itself to be a World Class destination for paddling and an ideal venue for both the World Series and the European Cup as it brings its own flavor and unique environment this phenomenal event. A big Mahalo to Iberdrola, the City of Bilbao, the B Waters Team, Turkish Airlines and all our partners for making this event a reality and such an ideal start to this year’s European Cup presented by Starboard. Make sure to stay tuned to www.watermanleague.com to watch the highlights from this first stop of the European Cup, presented by Starboard and as we embark on a Road trip this week, before hitting stop 2 in Oleron next weekend. 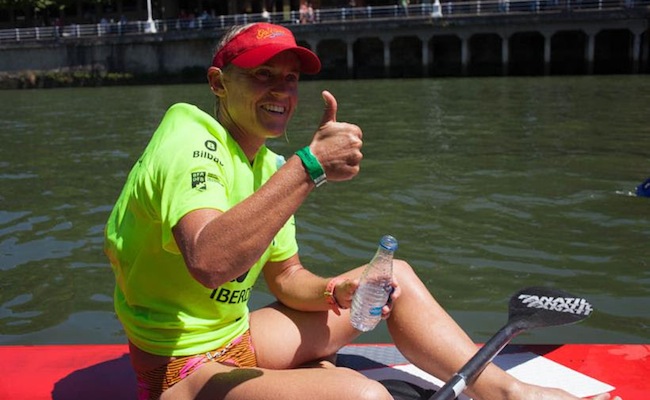 Angie Jackson puts on a dominant performance in Bilbao

After an incredibly dominant performance amidst World Class competition here in Bilbao, Angie Jackson (Fanatic) stepped it up again in the long distance race, making a statement with yet another convincing win here on Day 2 of the Iberdrola World SUP Challenge. The year has started well for Angie, currently leading the World Series Ranking and posting another win here in Bilbao as she only gains momentum through 2014. There is no doubt that Angie is a major force to be reckoned with and has her sights set on a World Title here in 2014. Watch this space and congratulations to Angie for a well deserved win. 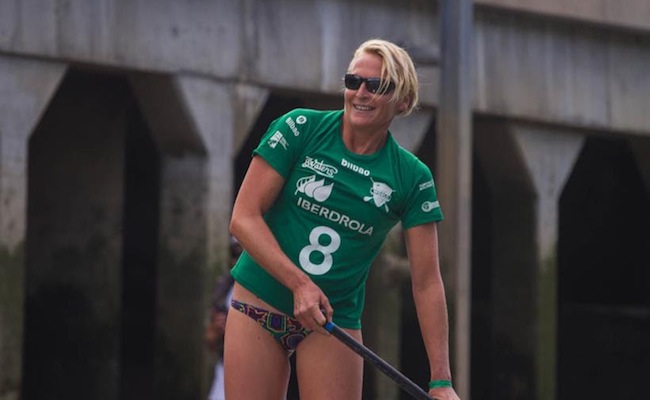 Also putting on an impressive performance this weekend, Sonni Honscheid demonstrated that she is a real force to be reckoned with, taking 2nd place in both the sprints and the long distance for a worthy second place overall. Sonni has solidified herself as one of the World’s leading female paddlers this weekend and will certainly be a face to watch out for through the second half of the 2014 season. Stay tuned to www.watermanleague.com

In 3rd place, Celine Guesdon from France put on a valiant performance, missing out on her 3rd round heat in the sprint racing (but still finishing in 4th= overall) and then putting on a stellar performance today in the long distance to secure a third place finish. The two combined meant that she tied with fellow countrywoman Olivia Piana for 3rd, so a tie breaker was put in motion to decide the 3rd place. In the end it was to be Celine’s day, as she just got the better of Olivia to take the win in the tie breaker and secure her 3rd place overall for the event – an impressive performance by this French talent. 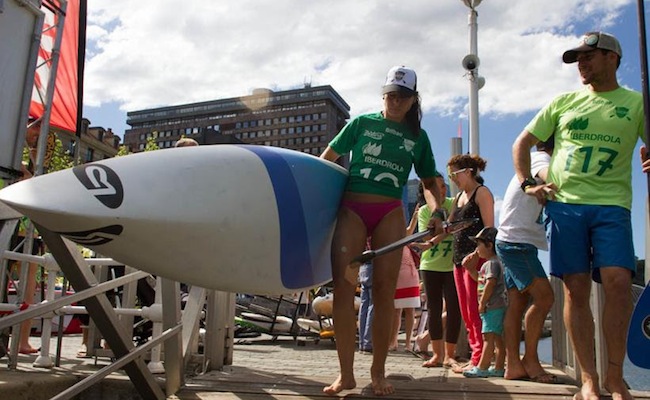 In 4th place therefore was Olivia Piana (Fanatic), who once again proved she is one of the leading lights on the Stand Up World Series, finishing in 3rd place in the sprint racing and 4th place in the long distance, unluckily for her, just falling short of Celine in the tiebreaker leaving her in 4th overall for the event. Nontheless another great performance from this French athlete who will be looking to consolidate on her performance as we progress through the events on both the European Cup, but also World Series.

* Story and Feature by Watermanleague.com

More in this category: « Schedule of Battle of the Paddle 2010 Schweitzer and Logreco Win at Turtle Bay »