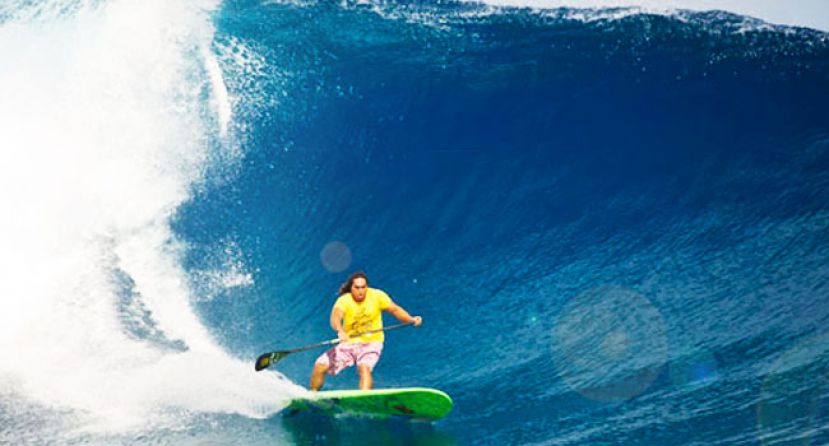 SAPINUS REEF, Tahiti — Sapinus delivered some spectacular waves today on Day 4 of the He'e Nalu TNTV Sapinus Pro, presented by Air Tahiti Nui: solid, but unpredictable 6 - 8 ft waves crashed onto the reef for the continuation and conclusion of the Trials today, with 6 Trialists set to advance through into the main event, and only one Trials Champion to be crowned.

After a fiercely fought quarter and semi finals, with stand out performances across the board, it was to be California's Sverre Strom, Tahiti's own Patrick Bourligueux and Tahutini Heifara and finally Hawaii's Kalani Kahalioumi, who advancd through into the Finals.

However, it was to be local surfer Patrick Bourligueux's day, surfing consistently through the whole contest to take home the honors for the Trials, closely followed by Sverre Strom, who performed what was perhaps the most radical maneuver of the contest so far - a massive floater that had everyone on their feet. Behind Sverre, was Kalani Kahalioumi, surfing well throughout the event to make it through to the main event and in 4th, Tahutini Heifara.

The Contest has now been called off for today to await the better conditions that are expected over the coming days. A large swell is forecast to hit tonight and last through to Friday, so the next call will be at 6.30am tomorrow morning. Keep an eye on watermanleague.com for the latest from the He'e Nalu TNTV Sapinus Pro, presented by Air Tahiti Nui.

More in this category: « Antione Delpero Claims Event 2 of SUP Tour Sapinus Pro Gets Heavy as Semi Finals Near »