Awards
updated 7:00 AM PDT, Apr 6, 2020
Headlines:
Outdoor Retailer Cancels 2020 Summer Mar: Due to the ongoing threat of COVID-19 (c
#SupconnectLive Series Coming to Instagr: Supconnect is launching a new series, #S
Malibu SUP Surfer Gets Arrested: On Thursday, April 2, a Los Angeles man
How to Choose Gear for SUP Yoga: As one of the leading voices in the SUP
Supconnect Launches 2020 Paddle Board Re: For the past year, the Editorial team at
APP Launches Immersed TV Show Series: Starting the 1st of April, APP is delive
Weekly Recap 3/31/2020: Welcome to the Supconnect Weekly Recap,
SUP Surfing Mistakes To Avoid: Mistakes are inevitable, they happen to
Top 5 SUP Destinations in USA: After about 5 years on the road Mike Tav
Why SUP is an Ideal Sport for Seniors: When it comes to seniors, exercises like 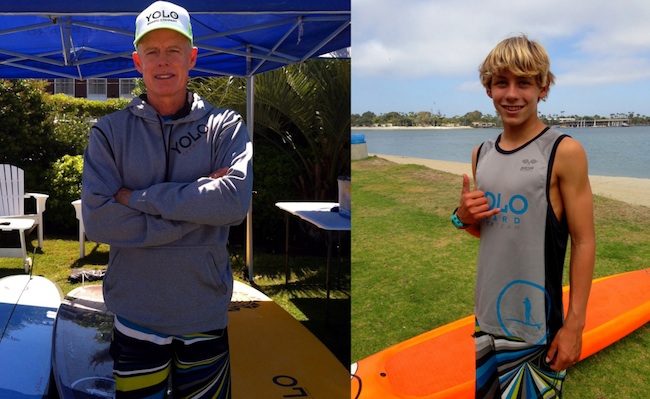 SANTA ROSA BEACH, Fla. (July 26, 2013) – A key to the surging growth of SUP has been linked to the versatility and universal appeal of the sport, and YOLO Board’s newest Elite Race Team members reflect the expanding age ranges of elite athletes competing on the SUP race circuit. Noa Hopper, a West Coast teen racer quickly gaining momentum, and Rand Perkins, a seasoned paddler based on the East Coast, are the newest faces representing the brand from coast to coast.

“One of the sweetest aspects of SUP has been witnessing the blend of youth and experience on the race circuit,” said Jeff Archer, co-owner of YOLO Board. “Noa brings a fresh vibe and unlimited enthusiasm to our team while Rand offers a lifetime of paddling and racing knowledge, remaining very competitive at age 61 and often surpassing elite racers in their twenties. Both paddlers have been excelling in and along their respective divisions and coasts, and we’re excited to watch them grow and develop as YOLO Board racers.”

San Diego-based Hopper has been involved in paddling sports his whole youth, participating and competing in SUP, surf, water polo, prone paddleboard, surfski & flatwater kayak. Despite his short career, Hopper has many notable victories under his belt including first place in the 2013 Hui O He'e Nalu Paddleboard and SUP Race (19U), the 2013 Hennessey’s Hobie WPA 7 mile race (18U) and the 2013 Hanohano Ocean Challenge 4.5 mile race (19U). In addition to SUP, he is currently training for the US Nationals Junior Kayak Team. A rising star on the West Coast scene, Hopper brings an easy-going style and inherent leadership skills to the SUP community.

A semi-retired architect/builder residing in the Smoky Mountains of North Carolina, Perkins has a long history in competitive paddle sports from whitewater to open-water racing. He began competing in SUP in 2011 and has appeared on the podium in nearly every race he’s competed in, most recently finishing first overall in the 9.5 mile 2013 James River Paddle Challenge. Drawn to SUP racing because it tests his strength, balance, endurance, and concentration, Perkins is looking forward to promoting the YOLO lifestyle and connecting with likeminded athletes while representing the brand.

To learn more about Perkins and Hopper along with the rest of the YOLO Board Elite Team Riders, please visit www.YOLOBoard.com. For additional company information, please call 850.622.5760 or email [email protected]

“Jeff Archer and co-founder Tom Losee didn’t invent SUP or its boards … but their savvy, marketing-driven approach has, despite the sport’s West Coast roots, made the Santa Rosa Beach, Fla-based company an industry leader in just five years,” said Entrepreneur magazine. Established in 2006 along the world-renowned beaches and diverse waterways of Northwest Florida’s Gulf Coast, YOLO Board is a standup paddleboard (SUP) brand that is aptly named for the lifestyle mantra, “You Only Live Once.” The bi-coastal company manufactures a variety of boards suited to fit any paddler, from the recreational novice to the elite pro racer. Rentals, lessons, corporate and team building packages and seasonal community race events are available through YOLO Board Adventures' two locations in WaterColor, Fla. and Sandestin Golf and Beach Resort, as well as their retail location in Santa Rosa Beach, Fla., new flagship store in Miramar Beach, Fla. and Old Town San Diego, Calif. For more information, visit www.YOLOBoard.com or call 850.622.5760.

More in this category: « Jake Jensen Joins Team Fanatic International Save a River, Send a Tweet, Win a Boardworks SUP »