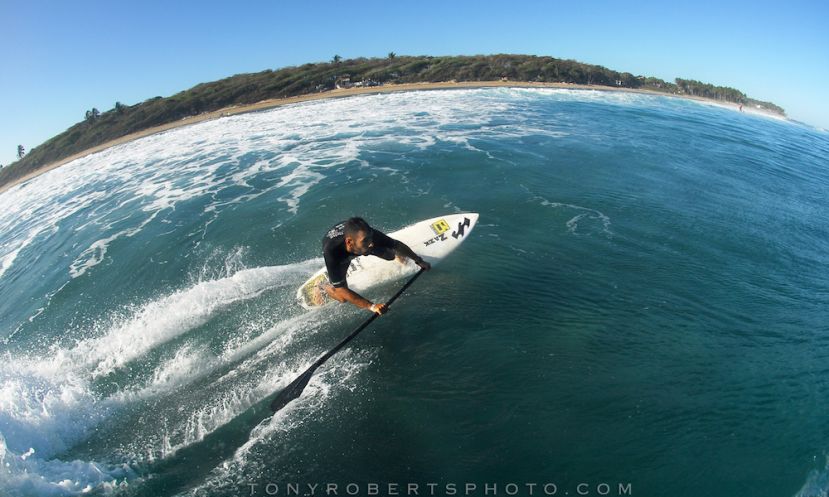 ENCUENTRO BEACH, Dominican Republic - The second day of the 2015 Master of the Ocean started with a slight breeze and some nice swell; the sun came out early and strong, making conditions great for the semifinals of the surf and stand-up paddle categories for overall competitors in the morning.

Hardcore supporters were on the spot bright and early, who were later joined throughout the day by more and more people. Cameras in all sizes vied each other for the best shot as well as two drones, which, every time they took off or returned to the beach caused havoc among the pack of eleven disheveled beach dogs.

Throughout the day all eyes were on the competitors looking to make radical yet controlled maneuvers in the first part of the wave. These score higher points than later explosive action further down the wave.

Even better than on Monday, overall competitor and 2014 Master of the Ocean female title holder and Starboard SUP and Werner Paddles athlete Fiona Wylde did an amazing job at kicking butt again and came out as the winner of her semi-final stand-up paddle heat. Fellow Starboard SUP teammate, Zane Schweitzer, the holder of the male 2014 Master of the Ocean title, won both his semi-final heat in the stand-up paddle category as well as the surf category. Both will now face each other in the overall finals on Wednesday for the stand-up paddle category.

Zane is all smiles as he paddles out in his surf heat. | Photo: Tony Roberts

“Competitors are much stronger this year than last year”, explained Zane, who travels ten months out of twelve to compete in water tournaments around the world. “The conditions are also pretty good this year, which helps bring out the best in everyone.”

Also local surf champion Brandon Sanford did great in both the stand-up paddle and surf semi-finals, and will be going on to the finals, as should windsurfing legend Brian “Action” Talma, although the jury members have not yet decided at the time of publication whether it would Brian or Diego Anta who would be qualified to go to the surf finals. Action Man Talma was still very happy: “It’s really great to be here again as all the other competitors are so supportive of each other”, Brian raved. “Even during the kite quarter finals yesterday afternoon, which is not my strongest sport, I had so much fun just because everyone is so mindful and generous.”

Olympic windsurfer medalist Michael Gebhardt, who was the only non-Dominican to win one of the four kite heats yesterday afternoon, explained that the competition conditions were not too easy yesterday afternoon. “Relatively strong waves, wind of around 15 to 18 knots and a strong downwind current made it hard to stay upwind yesterday”, Michael explained, while fixing the fin on his windsurf board MacGyver style with a Swiss army knife. “The wind is forecast to be stronger this afternoon and hopefully we can then also start the windsurfing heats”. Brandon Sanford was also in the kite category one of the Dominican winners, and will be competing in a nearly-complete-Dominican-semi-finals” this afternoon.

Zane Schweitzer has been doing exceptionally well in both surf, SUP and Windsurf in the competition. | Photo: Tony Roberts

Six Master of the Ocean teams, with four athletes each competing in one category, started their race for the title today as well with surf team members getting in the water in the late morning. By then the wind had picked up slightly and the love of the viewers had risen to hot temperatures. They got rewarded for their enthusiasm watching the athletes smacking the lips and fins getting out of the water, a few attempted 360s and a tail into reverse. Finals will be held on Wednesday morning between finalists Brandon Sanford for Team Terminator and Edual “Papito” Santana for Team Christo Salva as well as a third finalist, the winner of the Team Surf semifinals which will be held on Wednesday as well. The SUP team heats were as thrilling as the surf ones, with Zane Schweitzer for Team Aloha and Alexandre for Team Cristo Salva already qualified for the finals, and a third contender still to come forward from the semifinals also to be held on Wednesday.

The action continues this afternoon with the kitesurfing semifinals and the windsurfing quarterfinals.

Check out more news and action from Master of the Ocean here.

Background information on Master of the Ocean

Created by German waterman Marcus Bohm in 2003, the Master of the Ocean was originally conceived as the “Ironman of Water Sports”. The competition features a maximum of 12 teams of four athletes per team (one for every discipline) and a maximum of 16 overall athletes who master all four disciplines, with all competing for the Master of the Ocean title.

The idea behind the event is to provide an opportunity for Dominican and Dominican resident athletes to compete side by side with international professionals.
Cabarete was chosen as the best playground for this event as it boasts ideal conditions almost year-round for watersports.

More information about this event on www.masteroftheocean.com