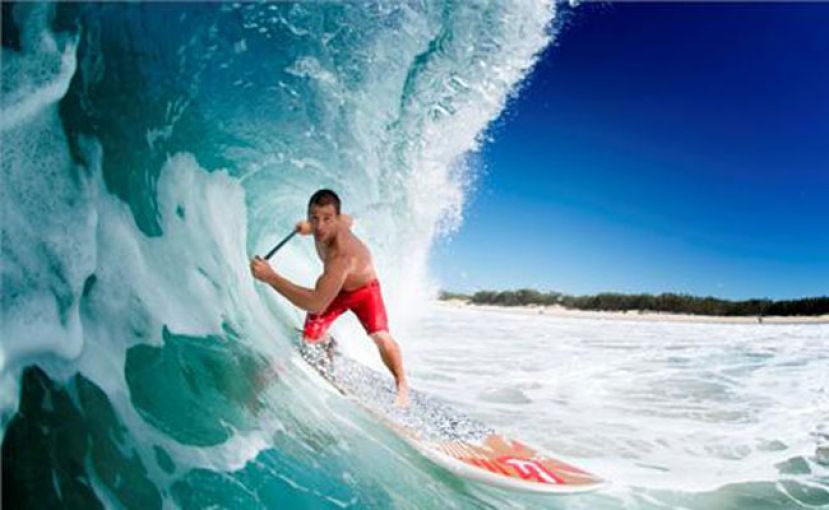 OAHU, Hawaii – After 3 lay days since the Da Hui Trials on Monday, athletes are now getting ready for a possible day of action tomorrow as the Main Event will get underway here at the Sunset Beach Pro, presented by Malibu and Starboard and in association with Maui Jim Eyewear. Conditions cleaned up this evening and bode well for an early start tomorrow, although reports of a new swell for Saturday and Sunday might encourage us to hold off. The next call will be at 7am on Friday morning (tomorrow).

1. The first round is full of local & international contenders

From Hawaiians Kamaki Worthington, Bonga Perkins, Kala Alexander, Noland Keaulana, Ekolu Kalama and Duane DeSoto, to young guns Benoit Carpentier from France, Yuri Daberkow from Brazil, Keahi de Aboitz from Australia and Connor Baxter from Maui, not to mention established talents such as Chuck Patterson and newcomer Beau Nixon from Australia, the competition will be intense right off the bat. Also to watch out for is surfing hotshot, Jamie O'Brien: known as a freakish talent in the shortboard surfing world, Jamie has been putting some time in stand up paddling and is looking to make his presence felt here at the Sunset Beach Pro. However, Sunset makes the rules and is invariably the star of the show, so stay tuned for one of the most exciting showdowns of the year, right here at the 2012 Sunset Beach Pro.

2. Top seeds will be looking to start the year off with a win

From 2x World Champion and Sunset Beach Champion Kai Lenny, to Zane Schweitzer, Antoine Delpero, Leco Salazar, Sean Poynter and Robin Johnston, the competition will be intense here at the Sunset Beach Pro as the Top 24 seeds will hit the water in Round 2 Also a very welcomed return to Stand Up World Tour competition is France's Peyo Lizarazu, who missed out on the second half of the year in 2011 after winning the 3rd stop in Tahiti, but is back at Sunset this year, a place where he has finished in the finals in both 2010 and 2011. His 2010 finish led to the intense title race between him and Kai Lenny that kept Hawaiian and European camps on the edge of their seats......stay tuned.....

3. Mistral International becomes a Gold Patron of the Tour

We are proud to announce that International board brand Mistral has come on board as a Gold Patron for 2012, showcasing their support for the growth of the professional side of the sport, and establishing themselves amongst the world's leading Stand Up Paddle brands. With World #5 Robin Johnston as their principal ambassador on Tour, but also as a contributing shaper to their overall design process, you can expect great things from the brand in 2012.

4. JP Australia also joins as a Gold Patron of the Tour

We are proud to announce that JP Australia has also stepped up as a Gold Patron for the Tour: long regarded as one of the most high performance brands in the sport of windsurfing, they are now turning their focus onto Stand Up Paddling to produce a high performance range of products. Leading their international team will be Australia's Keahi de Aboitz who will be competing here at the Sunset Beach Pro. Keahi made history in Huntington Beach by scoring the first perfect 10 in Stand Up World Tour history and is certainly a real talent to look out for.

5. Coreban steps up to Gold: an international, growing brand

Coreban has stepped up to become a Gold Patron of the Stand Up World Tour: originating from South Africa, but with offices in Australia and even in Maui, the brand is truly global and is a rapidly emerging company led by inspired individuals. One of the principals, Ivan Van Vuren has been a driving force in SUP since the early days and now, leading women competitor Talia Gangini has been putting the brand in the global limelight and will continue to do so.

Another brand with windsurfing roots, and with a strong reptuation for the production and development of high performance equipment has taken a big step into Stand Up Paddling, with a complete range of products, but also now as a prestigious Patron of the Stand Up World Tour and Series. From top racer Chase Kosterlitz, to racer and Stand Up Surfer from Australia Paul Jackson, Fanatic has a truly international team that will be representing them on both the World Tour and Series

7. SUP Magazine is the Official Magazine of the Stand Up World Tour

8. GoPro becomes the official sports camera of the Stand World Up Tour

We are proud to announce that GoPro is the official sports camera of the Stand Up World Tour, providing the right equipment to be able to get the up close and personal shots of the athletes as they battle it out on the Stand Up World Tour. Stay tuned for GoPro special segments at www.standupworldtour.com as well as through GoPro channels. Next call will be tomorrow (Friday) at 7am. Stay tuned for news, shots, highlights and more right here at www.standupworldtour.com