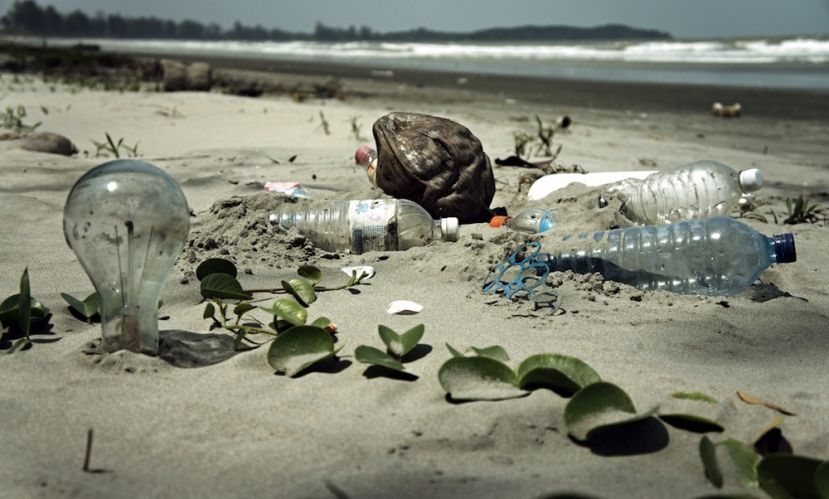 LONDON, United Kingdom – Between April 8 and 13, 2016, London’s waterways will host recreational paddlers collecting rubbish from canoes, paddle boards and kayaks all in a bid to raise awareness of the plastics pollution problem and to clean London’s waterways. The good news? All Londoners are invited to get involved in one of the many organized clean ups around the capital and learn how to paddle while you’re at it!

Paddle & Pick is a new campaign by a coalition of like-minded water sports groups, environmental charities and other bodies who are passionate about improving London’s waterways with the common goal of freeing our rivers from litter. The UK’s waterways are often beautiful spaces where a slice of tranquility can be found even in urban areas. However, in many places they are blighted by litter and in particular plastic waste. The campaign idea was born out of the frustrations one paddle boarder, Paul Hyman, experiences when paddling his local waterway:

“Getting into the great outdoors is liberating but there is one very persistent problem that is spoiling the enjoyment and the safety of water sports and that problem is litter,” said Paul Hyman from paddle boarding group Active360. “Sometimes the fin from my paddle board becomes snared on a plastic bag that has ended up in the canals and we often get onto the Thames stepping over discarded plastic water bottles. The sad reality is that dealing with plastic trash is part of practicing a water sport, but that’s just not okay! Once it reaches the Thames plastic harms wildlife and often ends up in our oceans causing damage to our natural environment for hundreds of years.”

Paul and the rest of the team behind the Paddle & Pick campaign say that it doesn’t have to stay that way. They are urging anyone who enjoys water sports and other activities such as walking, cycling or riding beside their local waterway to get involved with the campaign by joining an organized waterside clean up between April 8th &13th in several locations across London. 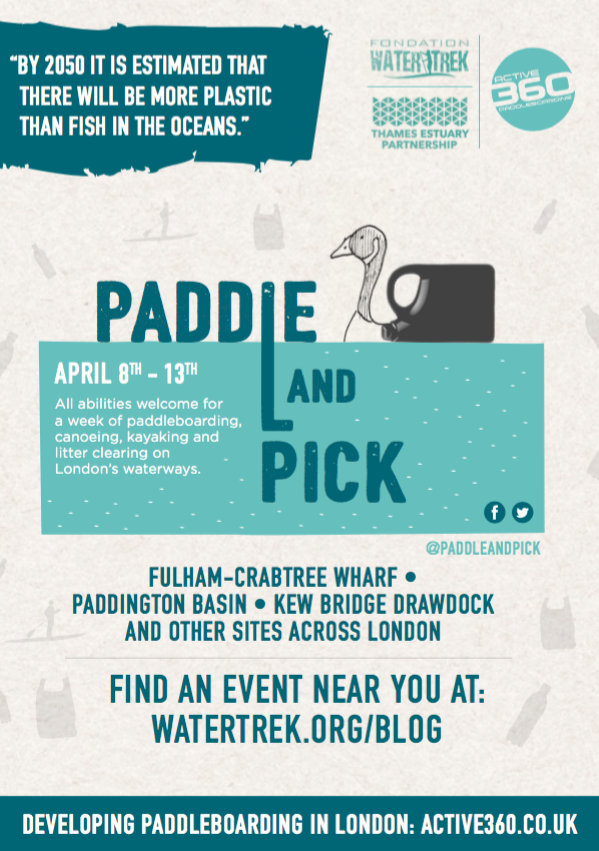 Emma Harrington, Development Manager at Thames21 said: “Together with the Port of London Authority, we remove 300 tons of litter from the River Thames each year, highlighting the blight of litter on our waterways. That’s why Paddle & Pick is so important because it will reignite the connection between people and their local waterway in a novel and fun way and inspire a sense of pride in caring for our waterways.”

Thames Estuary Partnership is very pleased to be coordinating the event for Active 360. The event is a great opportunity to raise awareness of a new collaborative project to reduce the use of single-use plastic water bottles across London – the #OneLess campaign. There is growing evidence to show that 80% of litter that enters the river & ultimately the open ocean comes from land based sources. Amy Pryor, TEP’s Program Manager said: “Reducing our use of single use, disposable plastic water bottles would make an immediate difference to the health of our river, the ocean and London as a whole. We will ask people to become part of the solution and make sure #OneLess plastic bottle enters the ocean by making a personal commitment to use a refillable water bottle. Paddle & Pick is a fantastic opportunity to raise awareness of this problem and start to tackle it together.”

This weekend of action is an opportunity for all river users to give something back to the river that created London and join a unique initiative that will see both litter pickers on the foreshore and in the water removing rubbish at the same time. There are opportunities at clean ups for people to join in for free paddle boarding or canoeing session subject to availability, as well as win prizes from Water to Go and The Whale Company.

John Sage, Corporate Responsibility Manager at Tideway, said: “At Tideway our vision is to reconnect London and Londoners with the River Thames, so we are delighted that people will be getting out on the river to help protect it. This is a fantastic opportunity to discover the recreational and environmental opportunities our city’s river provides.”

The Paddle & Pick campaign is a joint initiative by Active360, Thames Estuary Partnership, WaterTREK, Thames21, Tideway and the Canal & River Trust, among many others. There will be a press launch midday on the 8th of April for the event at Crabtree Wharf where the Paddle & Pick campaign aims to restore the historic wharf to its former beauty. The Crabtree pub will be hosting this event where we will invite partners and media friends to celebrate the start of the project and learn more about the plastics pollution problem.

A full list of events is available at: www.watertrek.org/blog/ .You can follow the event on Facebook at the Paddle and Pick - plastic pollution campaign as well as on the Active 360 webpage.

More in this category: « Fiji Confirmed To Host 2016 ISA World SUP Championships In November 70 Stand Up Paddlers Set To Paddle The Guadiana River In One Day »