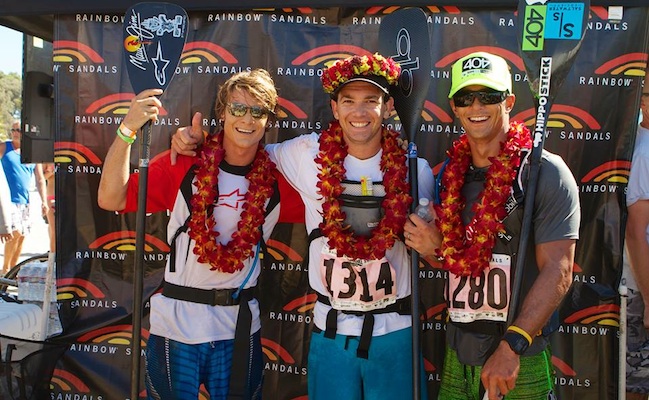 DOHENY BEACH, California - At this point in time most of you know the results of the 2013 Battle of the Paddle Stand Up Paddleboard Championships. ·What you may not have realized, however, is that the top three male finishers in the 14 foot division of the distance race were all FCS SUP team riders!

FCS SUP is a company that creates stand up paddle gear and accessories such as fins and leashes, and this Saturday they assisted with the success of many champions.

Travis Grant, for example was the winner of the men's stand up paddle distance race and used the Danny Ching racing fin. Travis actually had a knee injury this year and decided not to participate in the elite race on Saturday due to the amount of foot running involved between each lap of the very demanding course.  However, he did decide to compete in the distance race because there is only one running section at the very end of the race.  His strategy involved getting a big enough lead that it wouldn't matter how slow his finish was up the sand and through the finish line.

Travis shared a few thoughts with us about the Sunday distance race by saying that it, "was fast.  I had a plan on what I had to do to give myself the best chance to win.  It all went to plan and I got the magic wave I needed to seal the win.  I'm very happy."   And when asked about the race fin he used he replied, "I ran the DC (Danny Ching) fin.... Ching is a good friend, great athlete and competitor.  I use the Danny Ching fin on all my raceboards. "

Danny Ching himself took second this year in the men's 14 foot distance race and of course used his very own FCS SUP Danny Ching fin.  After him came the ever impressive Zane Schweitzer, a 20 year old from Maui, Hawaii who used the FCS SUP Weed fin in his race to finish third.

"I'm so honored to be up in the top three of the most prestigious Stand Up Paddle Race in the world!" said Zane.  "Thanks to my FCS Fin setup, I was able to keep kelp off in the 10 mile distance race and execute sharp buoy turns in the elite course races. Aloha Nui Loa, and see you on the water!!"

Congratulations to FCS SUP and their winning team this weekend.

FCS SUP does their best to make high-quality innovative products that will help you improve your performance and your standup paddle experience in and out of the water. They are honored to work with a long list of legends and to partner with them to help improve their performance and yours. FCS SUP believes that the sport of standup paddling is largely about empowerment and helping people to enjoy their lives and achieve their performance goals. They are excited to share their products with you in the FCS catalog and hope that you will be excited to share them with your friends and your customers. FCS SUP hopes that you will also share that same spirit of aloha that came from Hawaii so many years ago. It is truly a gift that keeps on giving.

More in this category: « FCS SUP Athletes Succeed At 2014 Battle Of The Paddle FCS SUP's Casper Steinfath Takes Over Paris »