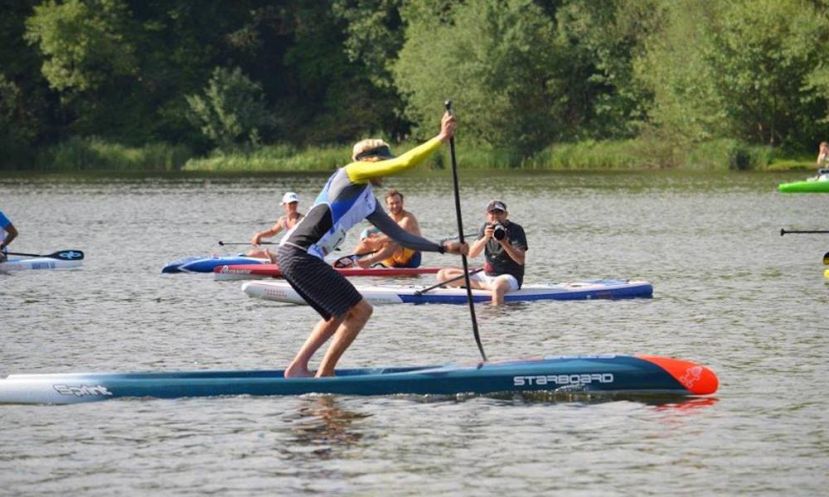 BROMBACHSEE, Germmany - The 2016 Lost Mills Event was once again a huge success!! For my fourth year now, it is always fun to come to this event and compete against the best athletes. Like always, the event kicks off with the “Fastest Paddler On Earth” competition and I was ready to take the honors back this year. The new Starboard Sprint was working amazing and I couldn't wait to sprint 200 meters on it.

This year there were 91 men that entered for the same thing - bragging rights to be “the Fastest Paddler on Earth". Only 20 of the fastest times made it to the finals, which was definitely going to be a challenge, but there is no fun in easy things. The first round we had two people go at a time and I was paired up with Trevor who won this title last year - which was both good and bad. The horn blew and we both went all out and sprinted to the end. I barely edged him out and got the fastest time going into the next round. Making 51 seconds it allowed me to go last and see all the times. 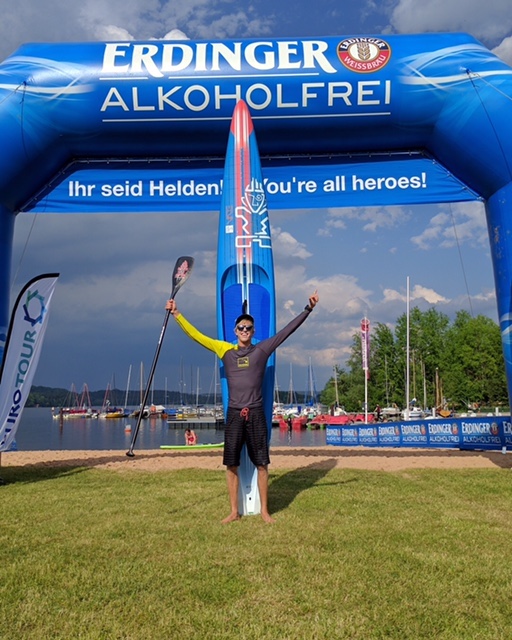 Without Trevor pushing me I knew I was going to have to push harder and not let anything stop me. As it got close for me to go - the fastest time was 53.60 seconds - so I knew I could do that or hoping for better. So, when it was my turn and the horn blew I sprinted as fast as possible with just the finish line in my sights. When it got painful and hard I knew I had to just push harder without letting up. I shifted to the next gear and crossed the line paddling 100%. It was a little slower than my first run, but it was just enough to put me in first and crown me as the new “Fastest Paddler on Earth.”

I was super stoked to be back on top for that event, but it wasn't over yet. The long distance race was the next day, so I got some dinner and a great night of sleep - and it was game time the next day. It was an 18 kilometer race with two short beach runs in between the lakes - which is the only place to break the draft train. The lake was super flat, so as soon as the race started the polar express train started up right away and I just made sure to be in the top 5 at all times, so I could have clean water and easy buoy turns.

We had to do three laps that were about 6 kilometers and each lap we had a high pace in the front to try break the weak links in the drafting train. On the first beach run Michael Booth and I both tried to make a break and had a nice gap for a bit, but everyone managed to catch back up to us. So, Michael and I knew for the second run and start of the last lap was going to be the last and only chance to make a break and not have to fight for first place with 10 other guys.

For the second lap I stayed in front, but tried to conserve energy so when the chance came I could break away with Michael. As we got closer to the run we picked up the pace and were able to make a small gap before the run and four of us took the opportunity to break away. It was Michael Booth, Jake Jensen, Titouan Puyo and myself that were now in the lead pack and to make sure it stayed that way I yelled out to the boys short hard paddles in the front and then switch.

We all took turns leading the train and paddled hard and held the big train off all the way to the last buoy, where Michael and I took off for the final sprint. We were stroke for stroke all the way to the beach where I had a small wobble, which gave him the gap to take the win. I was definitely bummed not to win - but there is always the next weekend and it was another First and Second Place finish for Starboard again!!

Now off to Bilbao Spain for the third stop of the Euro Tour. I want to thank my sponsors for all their support – Starboard, Dakine, Maui Jim Sunglasses, Futures Fins, Hammer Nutrition, GoPro, Garmin, Waterman’s Sunscreen, OnIt Pro and Hi-Tech Sports. Also a big Mahalo to all the event organizers and all the volunteers. Fantastic Event!!

More in this category: « Weekly Recap 5/31/2016 Jobe Sports Is Giving Away A SUP Roadtrip Around The US »