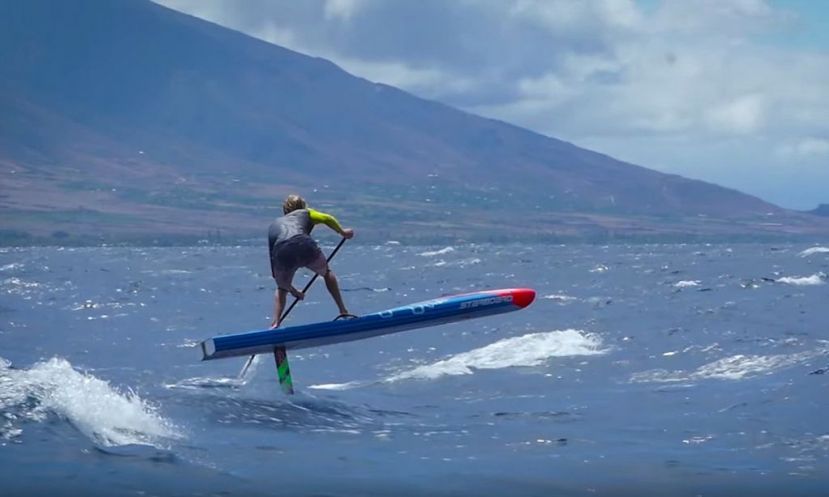 Connor Baxter on a downwind run in Hawaii.

MAUI, Hawaii - While on a Maliko downwind run off the coast of Maui, Hawaii with friends Zane Schweitzer and Alex Aguera, Connor Baxter found himself in a very scary situation. While on his Starboard SUP foil, Connor Baxter was attacked from behind by a 10 foot tiger shark.

At first Connor thought it was a prank from his friends but soon came to realize it was his worst nightmare. The jolt from the shark knocked Connor onto his back on the board leaving him in shock and having him thinking “Oh my gosh, this is really happening.”

“The power was incredible,” said Connor when describing the shark attacking his board. “He was twisting all around, shaking his body, and the board was at moments was almost flipping over.”

After realizing the shark wasn’t giving up, Connor quickly reacted by grabbing his paddle and hitting the shark around ten times to deter it from attacking. Then, the shark let go for a few moments but came back again for another attempt. At this point, Connor was ready and waiting with his paddle and he “got one really good crack with my paddle, right on the top of the head,” finally deterring the shark enough to realize it wasn’t getting a meal out of Connor.

In what could have been a very sad day on the water, Connor Baxter was able to act quickly and fight off a tiger shark that could have ended his life. Thank goodness he’s safe and sound at home on Maui. It is important to remember that when entering the water the risks that are involved as we are entering their territory.

More in this category: « Weekly Recap 8/9/2016 7th Annual Newport SUP Cup To Raise Money For Save the Bay »