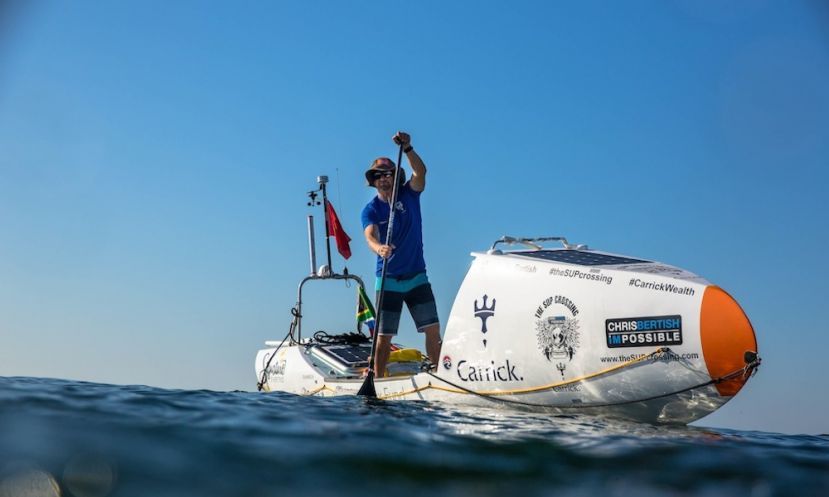 Paddling from mainland Morocco to the Canary Islands, Chris set the 300-mile open ocean record while embarking on the #theSupCrossing presented by Carrick Wealth, one of the greatest solo, open ocean adventures ever attempted. The SUP Crossing journey takes Bertish across 4,660 miles of open ocean, traveling the equivalent of a marathon a day for over 120 days straight.

"I am stoked to get through this monumental stage and past the Canary Islands. More importantly, to move forward into the transatlantic stage of the SUP Crossing and better conditions. Knowing that we've almost raised enough to build one school and to feed and make an exponential difference for so many more kids is the best Christmas present I could receive," commented Bertish.

Bertish departed on The SUP Crossing from Agadir in Morocco, on December 6, 2016 and began the voyage to the Canary Islands, across the Atlantic Ocean, towards the Caribbean Leeward Island of Anegada. Just months prior to Chris’ departure, the same transatlantic venture was attempted but not completed by Nicolas Jarossay, who experienced life threatening damage to his 21-foot board early in his journey.

Earlier in the week directly following his departure, Bertish broke Bart de Zwart’s world record, for the furthest distance paddled, solo and unsupported as he covered 193-miles, about 10-miles offshore.

Bertish commented “Bart de Zwart has been a great inspiration to me and even sent me a note wishing me well. I have the utmost respect for Bart as well as Nicolas Jarossay.”

The main purpose of The SUP Crossing is to leave a lasting legacy by raising funds for: The Lunchbox Fund, Operation Smile and Signature of Hope with the target of raising over one million dollars and making the entire project a completely self sustainable charity initiative, that will have a lasting legacy for generations to follow.

Bertish will also be working with, and doing research and raising ocean conservation awareness for the Two Oceans Aquarium, over the course of the crossing.

To contribute, donate and get involved, please go HERE.