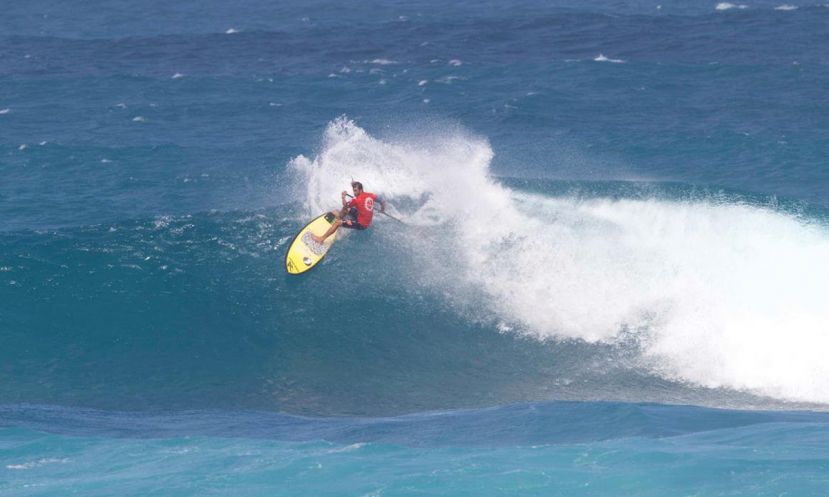 Caio Vaz starts the year off by taking victory at the 2016 World Tour Opener at Sunset Beach on a blustery final day of action. | Photo: Waterman League / Brian Bielmann

SUNSET BEACH, Hawaii - Caio Vaz just seems to go from strength to strength, and has once again found winning form at the 2016 Sunset Beach Pro, his second victory at this iconic break on Oahu's Fabled North Shore. His ability to adapt and excel in any kind of conditions is evident and what secured him the 2015 World Title, as once again here at Sunset, he dominated all his heats through to the Final, from the full size pumping surf of the first few days, to the blustery and incredibly challenging conditions on the Final Day, Caio was able to turn it on.

In the final, Caio made the challenging conditions look like a walk in the park, posting another excellent range score right off the bat to put the pressure on the other three finalists. He was then able to back it up with a mid range score to secure victory, an incredible achievement for this young Brazilian Champion. 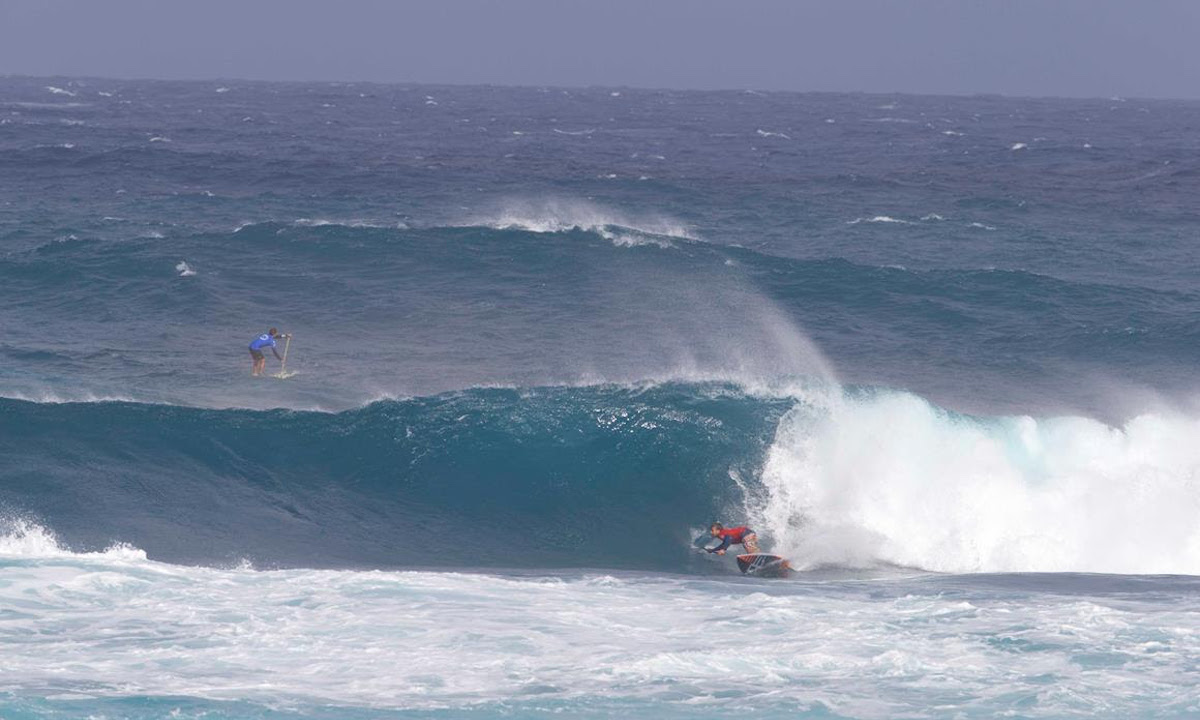 JP Australia’s James Casey has been on Tour for a few years now, and has already notched up some strong performances, most notably in Morocco at the Location X exhibition event back in 2014 where we saw him revel in more sizeable surf. However, there is no doubt that something clicked for the young Australian talent at Sunset Beach this year, as while the spectacular conditions of the first 2 days definitely suited his powerful style of surfing, he demonstrated his ability to adapt and cope with the pressure filled final rounds of competition on a challenging last day of action at Sunset Beach.

Coming up against 4x World and Sunset Beach Pro Champion Kai Lenny (Naish) twice, James was able to just get the edge on the formidable Champion both times on his way to the Final, and find the diamonds in the rough to be able to finish in an impressive 2nd place at this all important opening event. There is no doubt that James is going to be a name to watch out for over the coming year as he starts his year on a high here on Oahu's Fabled North Shore. 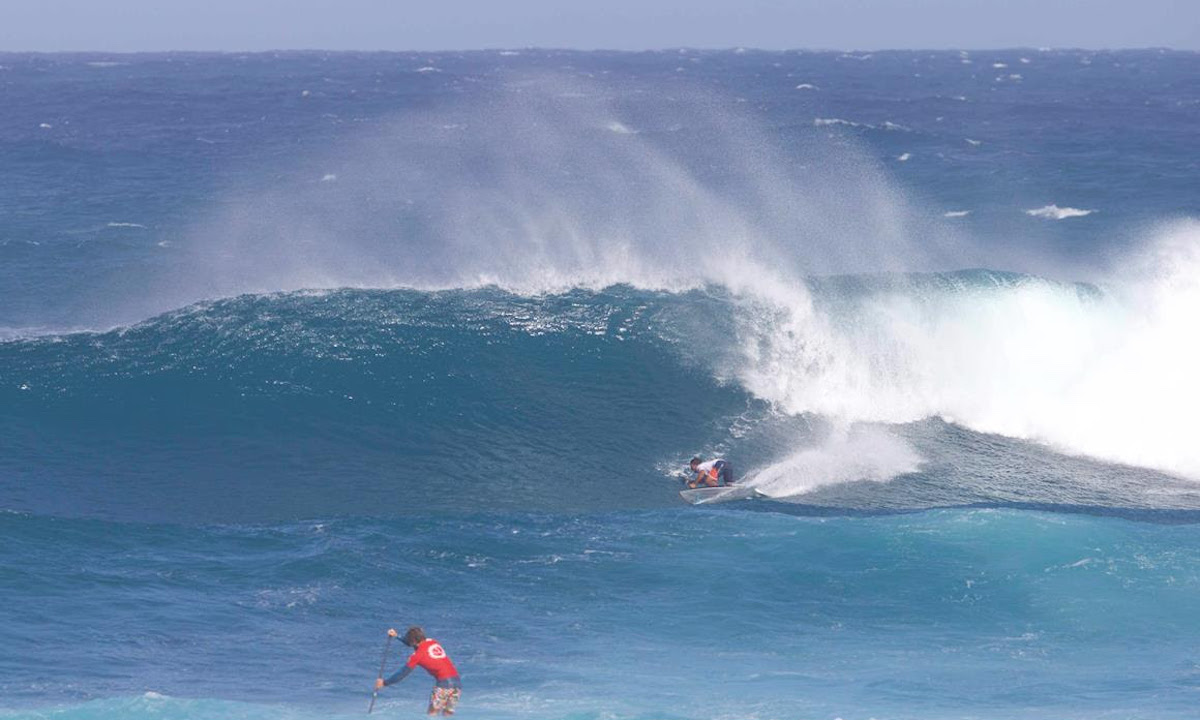 Poenaiki Raioha continues his relentless charge to the top of the ratings, posting a 3rd place finish to start the year off on a high. | Photo: Waterman League / Brian Bielmann

F-One’s Poenaiki Raioha is without doubt one of the major talents on Tour, finishing 2015 on a high with his first World Tour win at the US Open of Stand Up Paddling in Huntington Beach. Coming into 2016, Poenaiki and his Tahitian support group have their eyes set on the World Title and his surfing was a testament to this goal. Driving some of the most committed turns of the contest, Poenaiki posted excellent scores throughout the event and seemed to peak on the final day of competition with the highest heat score total of the day in the quarters as he took control of the challenging line up at Sunset Beach. While he wasn't able to find the back up score he was looking for in the Final, his 3rd place finish is a great start to the new season, as he keeps his sights set on Title contention in 2016. 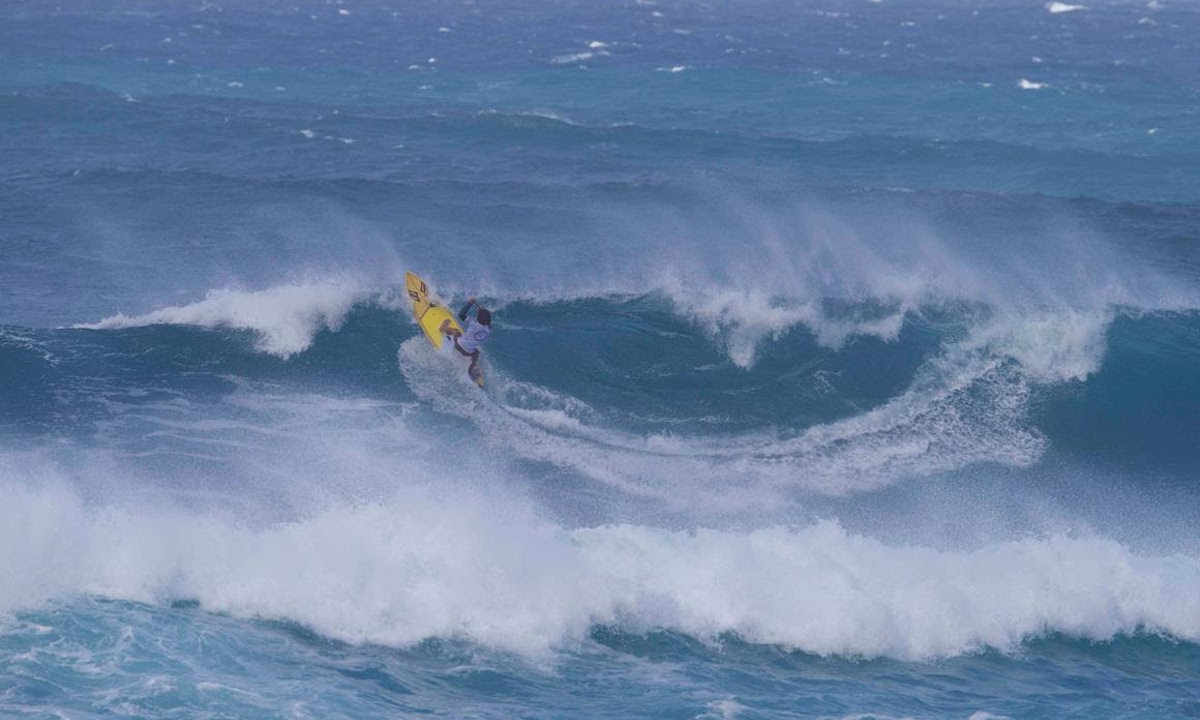 Bernd Roediger comes into his own at the 2016 World Tour Opener to secure a Finals finish and 4th place at Sunset Beach. | Photo: Waterman League / Brian Bielmann

Naish SUP’s Bernd Roediger is another of the immensely talented breed of Maui born athletes who excel across the complete cross section of Ocean Sports, as a Champion Windsurfer and a major threat on the World Championship Surfing Tour and Racing Series for Stand Up Paddling. Finishing in the Top 10 in 2015 and posting some standout performances along the way, there is no doubt that Bernd has already established himself as a force to be reckoned with, but here at Sunset Beach, he was able to cement the fact that he is a major threat, and in any kind of conditions. Bernd's fluid and dynamic style of surfing turned heads throughout the contest and got him all the way to the final, and while he had to settle for 4th place, he has set himself up for a stellar year ahead as we expect great things from this young Maui talent. 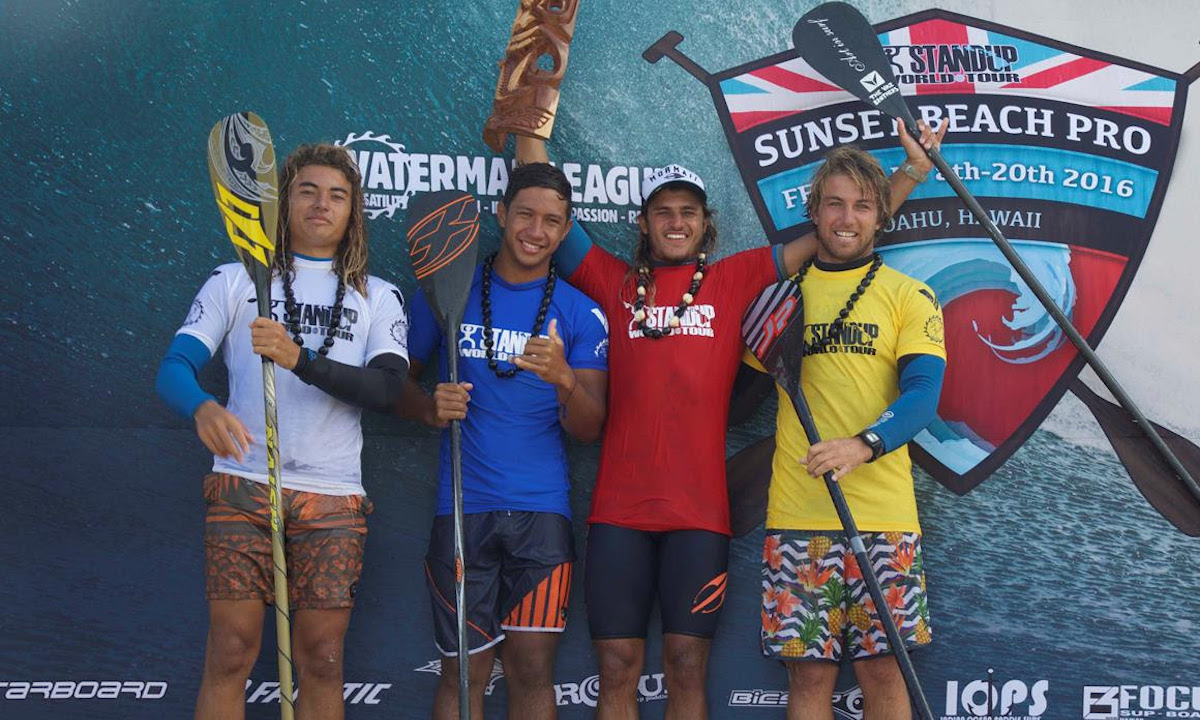 The kick off to the 2016 season has witnessed dramatic performances as a new wave of talent is making their presence felt. | Photo: Waterman League / Brian Bielmann

The 2016 Sunset Beach Pro presented by Turtle Bay is in the books, and was blessed with 2 of the best days of the year at Sunset Beach that saw performance levels go through the roof and new faces ascend to new heights. Watching James Casey and Bernd Roediger find their form at this opening event to make the final and turn heads from start to finish is an exciting sign of things to come. Also coming into their own were Naish’s Noa Ginella and Fisher Grant (27 North) who both made their way to the semi finals amidst a massively talented field. And from seemingly nowhere, a young Brazilian by the name of Marcio Grillo proved himself to be a major threat with a very complete game and an impressive ability to seek out barrels.

Meanwhile, the primary contenders of the past year have not skipped a beat, with defending World Champion Caio Vaz (Art in Surf) on a mission to defend his Title, Poenaiki Raioha (F-One) continuing his rise to the top, and of course the on form Mo Freitas (Focus SUP), who was a standout over the first 2 days of competition. It should also be noted that 4 times World and Sunset Beach Pro Champion Kai Lenny (Naish) was very much on the pulse of all the action, narrowly falling to Poenaiki & James Casey (JP Australia) in the quarterfinals, not to mention Zane Schweitzer (Starboard) and an on form Kai Bates (Fanatic).

One thing is for sure, it is going to be the most competitive year yet on the Stand Up World Tour, as the talent pool is expanding and the performance level accelerating. We are ecstatic to have been able to start the year off with the magic that Sunset Beach was able to provide us with and we look forward to the next stop on the 2016 Stand Up World Tour. Stay tuned for official Tour announcements over the coming week as we prepare for an exciting year ahead.

So a big thank you to all the partners of the Stand Up World Tour and of course the host, Turtle Bay Resort. Make sure to stay tuned for all things World Tour and more content from what was an incredible week of action here on Oahu's Fabled North Shore at watermanleague.com Check out the highlight reel from the final day of action in the video below.

To see action from the earlier rounds of the Sunset Beach Pro, click HERE.