Awards
updated 7:00 AM PDT, Aug 13, 2022
Headlines:
Supconnect Awards: The People's Choice 2: With the 2022 Supconnect Awards closed a
2022 Supconnect Awards Winners Announced: After more than six weeks of deliberatio
Announcing 2022's Gear of the Year Winne: After more than 6 weeks of deliberation
US Paddleboarders Benefit from savvy nav: Leading inflatable paddleboard brand, Re
4 Tips For Bass Fishing From Your SUP: A: Whether you’re an angler or a paddle boa
Weekly Recap 08/02/2022: Welcome to the Supconnect Weekly Recap,
Events of the Month: August 2022: Attending a standup paddle boarding even
APP London SUP Open Delayed Due to Strik: The APP (Association of Paddle Professio
Gorge Challenge Delivers With Best Condi: The SIC Columbia Gorge Challenge returne
Mistakes To Avoid When Buying A Paddle: When making your first paddle board purc 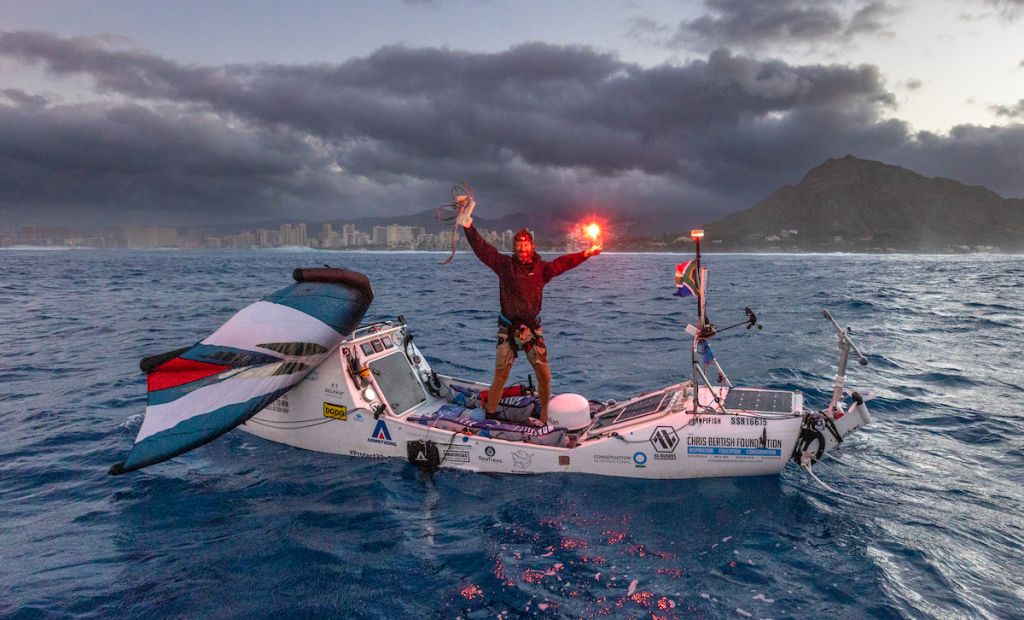 “It’s an unbelievable feeling to set a goal that appears insurmountable, do all that you can to achieve it, and reach the finish line far sooner than expected,” said Bertish. “The first part of the trip was super intense due to extreme weather and coming into the Hawaiian Island with Tropical Storm Darby on my heels, making for some of the most extreme and scary ocean conditions I have ever experienced.”

To immerse supporters in his experience, Bertish shared a tracker during his 2,550–mile journey across the Pacific Ocean, posted weekly “Captain’s Vlogs”, and shared valuable ocean temperature, and plastic and noise pollution data that he collected along the way. Transpacific Wing Project’s mission is to raise awareness of climate change and climate action while enriching minds through ocean conservation and ocean education. This project follows Bertish’s world first 2017 solo, unsupported, transatlantic stand up paddle crossing that garnered global attention and raised funds for various global charities.

Along the journey, Bertish hosted a pre-recorded “Ocean in Motion” virtual classroom to give back to education. Class episodes were released on YouTube during the expedition. Chris hosted classroom session discussions with experts across ocean health and climate change challenges, focusing on solution-driven thinking and how all humans can minimize their negative impact, take action, and mitigate the effects of climate change.

The Transpacific Wing Project is raising money and awareness for ocean conservation through partnerships with Conservation International and Sea Shepherd, all facilitated through the Chris Bertish Foundation, a 501c3 organization established in 2020 with the goal of building awareness, giving back and being a beacon of inspiration and positive change for youth and the world.

To learn more about this historical endeavor, check out https://chrisbertishfoundation.org/wing-project/

For more information on Chris Bertish, check out his website:

Chris Bertish is driven by passion and commitment and has achieved some of the greatest feats in surfing and stand up paddle boarding history. He is a waterman who turns adversity into opportunity and no challenge is too great for him. As an international speaker, Chris inspires audiences with stories of courage, determination, resilience and overcoming insurmountable odds to achieve seemingly impossible goals and dreams, while raising awareness for challenging ocean conservation and climate change issues globally. Never daunted by a challenge or adventure, Chris has earned global awards and set multiple world records in paddle boarding and surfing. His second film, “Last Known Coordinates” about his epic Transatlantic stand up paddle journey launched globally in mid-2021 and can be viewed on streaming platforms including iTunes, Apple TV, or on Vimeo.

More in this category: « US SUP Tour Starts Friday with $10,000 Total Purse Leco Salazar Wins With The Tour in Brasil »