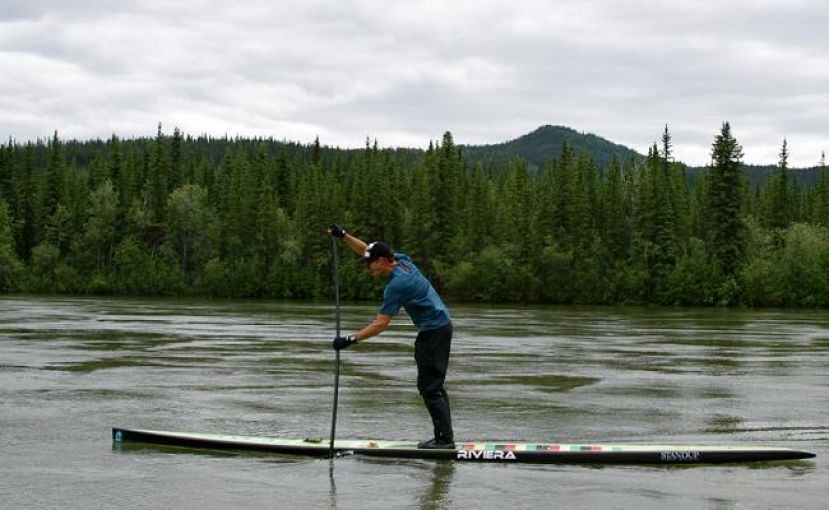 June 26, 2012 - Ben Friberg set out on the Yukon River in Canada’s Yukon Territory to Stand Up Paddle (SUP) as far as he possibly could in 24 hours. Riding the high water levels from the 2011/2012 winter ice and snow melt provided the perfect vehicle to go for a BIG distance day on this untamed body of water. The expedition took place during the long days around the Summer Solstice, so there was plenty of light and motivation throughout the 24-hour interval.

The goal of the 2012 Yukon SUP Expedition was to set the bar as high as possible for the distance a stand up paddler could achieve during a 24-hour interval. The adventure began at the North end of Lake Laberge at 3:07pm on June 26th 2012. To tabulate the exact distance covered, Friberg wore 3 GPS tracking devices to monitor progress.  Throughout the 24-hour expedition he paddled non-stop, taking breaks only to switch out hydration packs or eat a quick snack. Friberg maintained a solid 10mph moving average reaching 200 miles in the 20th hour. He then paddled an additional 38 miles in the final 4 hours for the mission’s total of 238miles (383 Kilometers), ending well beyond the Ingersoll Islands.

Expectations for 24 hr SUP expedition were always high. Documents were filed with Guinness World Records before the attempt, and now all remaining paperwork is being completed for them to recognize the achievement.  Most importantly though, this expedition hopes it can share with the SUP community the potential rewards the Yukon River offers. Spectators watched the event live through spot tracker technology via www.24yuksup.com and a documentary film crew was on hand to capture the event as it unfolded.

Ben is a 33 year old from Chattanooga, TN.  He has 20 years of experience exploring various disiplines of kayaking including creek, squirt, playboating, and whitewater stand up paddle (SUP).