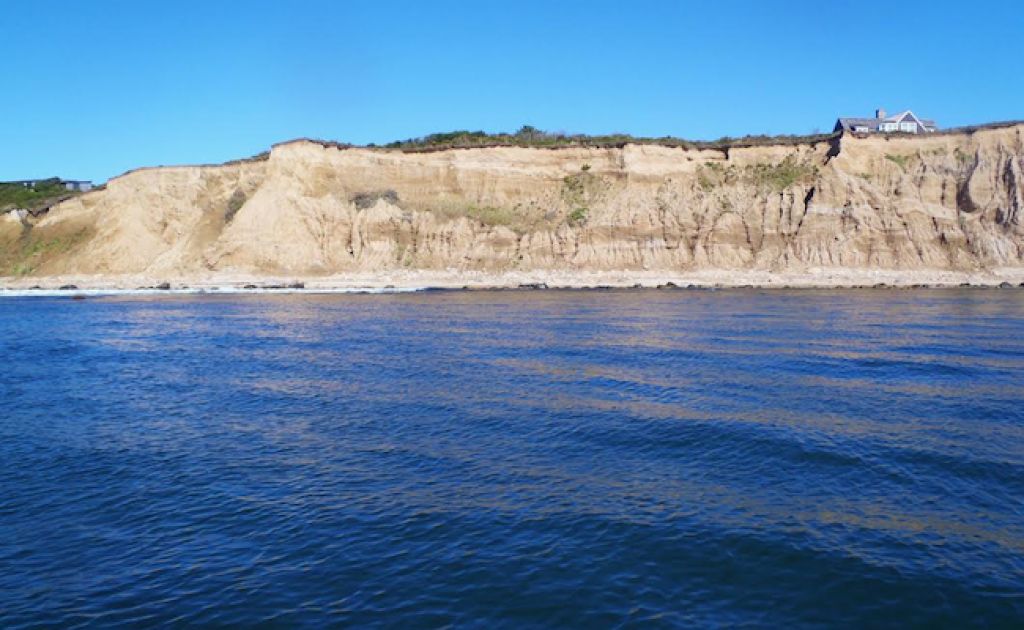 One of the most scenic paddles on Long Island moves along the incredibly beautiful and historically rich coastline in between Ditch Plains beach and the Montauk Lighthouse. About 8 miles round-trip (or it could be done as a downwinder with a W or NW wind), this water journey takes a paddler passed a some of the most historic and picturesque scenery in Montauk. 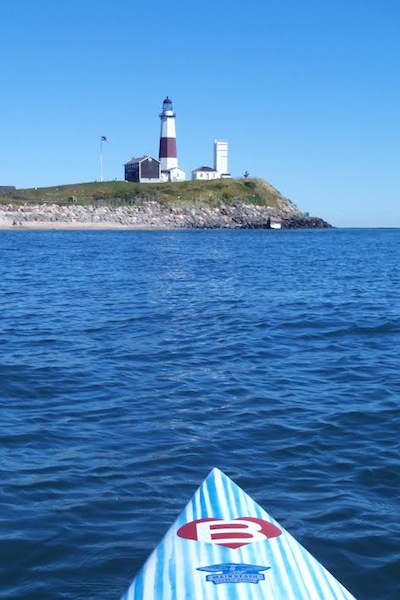 Route: Paddle from Ditch Plains to the Montauk Lighthouse 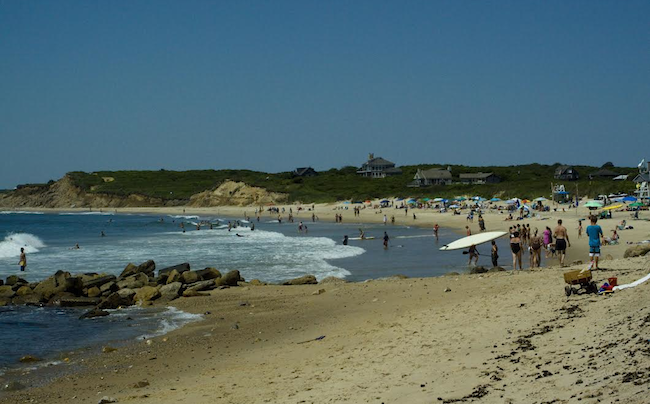 Launching from Ditch Plains beach is easy. Choose a day when there isn't much swell, park the car in the paved lot (where the bathrooms are) or the dirt lot (you'll figure it out) and use the rip right next to the jetty to sweep you out past the break. Remember, Ditch is a pretty happening surf break, so if you want to be on good terms with the locals and reduce the chaos in the water, pay close attention to any incoming waves and use timing, speed and control to move past the whitewater in one smooth transition. If anything, try staying just west of the jetty to stay out of surfers' waves.

Once safely out and facing the horizon, hang a left and head East. You'll cross behind some of the action in the surf zone (remember, stay far enough outside that you won't get caught up if a big set rolls through) and then paddle passed the Montauk Shores Condominium complex, a.k.a. 'the Trailer Park', where Jimmy Buffett has a homestead along with some big-name developers and hedge-fund guys. The ocean-side trailers are all privately owned and, when available, often sell for upwards of $500,000. Not bad for a trailer park! 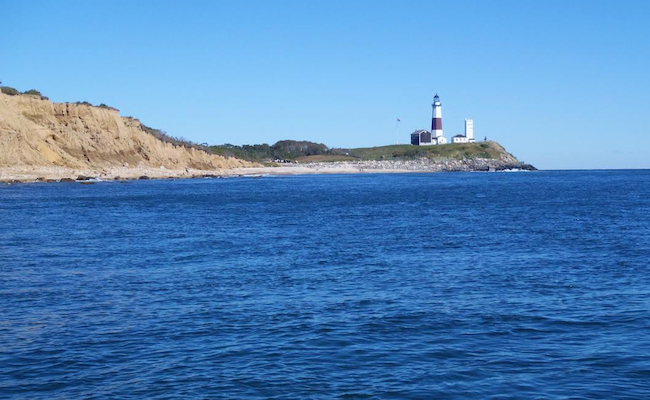 Keep paddling. Around the first point, you'll come into Cavett's Cove, a gorgeous half-moon cove with a pristine beach usually empty of any beach-goers. This is because the entrance to Cavett's by land is private and owned by long-time Montauk resident and legendary talk-show host, Dick Cavett himself. One has to either hike down the beach from the trailer park to reach Cavett's beach, sneak through the property (possible but not recommended) or paddle to lay up on this pristine sand. Back in the day, Cavett's was known as a nude beach so be sure to bring plenty of sunscreen if you decide to paddle in and stay for awhile!

Passing Cavett's, you'll become mesmerized by Montauk's stunning bluffs, standing some 40 - 50' above the waterline. Look carefully, and you will see the effects of recent erosion brought on by Hurricane Sandy and some un-named Northeaster storms that have scoured the cliffs of much of their vegetation and eroded the cliffs some 30' back in dangerous proximity to some of the houses built on top. 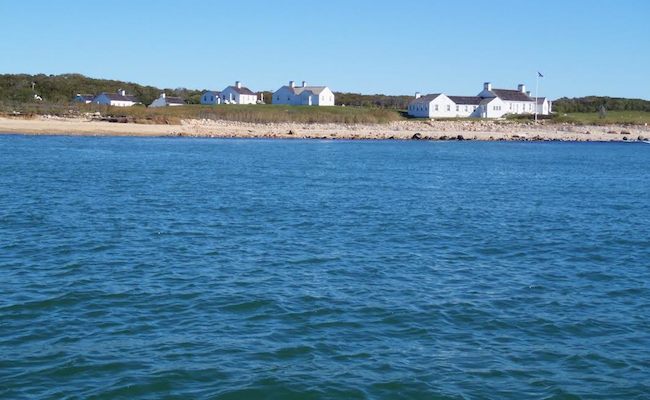 Paddle on. Around the next bend (about 1.4 miles out) are a series of unassuming single story, sun bleached, white washed buildings. This the once famed Andy Warhol estate, then known as Eothen. This 5.6 acre parcel on the sea holds five family dwellings and is said to have hosted several top American icons during the 1970's when Warhol reigned supreme. These big names included Jackie Onasssis, her sister Princess Caroline Lee Radziwill, Mick Jagger, the Rolling Stones, Liza Minelli, Liz Taylor and John Lennon to name a few. In 2007, the compound was sold to J. Crew's CEO Mickey Drexler for the tune of about 30 million dollars. Drexler also purchased the adjacent 22-acre Deep Hollow Ranch, the oldest cattle ranch in America which runs north of Montauk Hwy. all the way to the coast. That's one way to keep the neighbors from ruining the view! 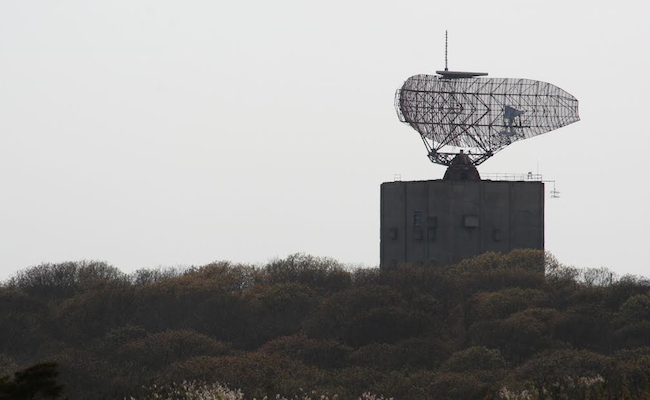 Beyond the Warhol estate, headed East further still, paddling along, you will pass photographer (and friend of Warhol's) Peter Beard's house, followed by the incredible structure called Montauk's 'Stone House' perched on the edge of the cliffs, and then finally you will find your way under the bluffs of Camp Hero, a former military base, where you can see the remnants of the radar tower built to alert American soldiers of a German invasion during WWII. Perhaps, most intriguing among the lore about Camp Hero are the rumors of time travel experiments that the military dabbled in during this era. Movies like the Philadelphia Experiment chronicle this journey and many Montauk locals swear these experiments are a truth that forever altered Montauk's population and history. 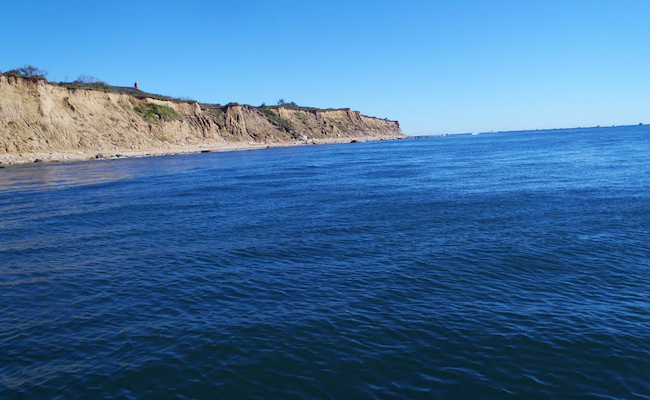 Lastly, as you round the last point and sweep through Turtle's Cove, you'll see the historic Montauk Lighthouse ahead of you. Sitting 110' above land and still ringing out a horn on foggy days to warn fisherman and boaters of the dangerous rocks and currents that run close to shore, the lighthouse was commissioned in 1792 by George Washington and was the first ever to be built in New York State. Be careful at this point in your paddle! The currents around the lighthouse can be strong and treacherous, especially with the turning of the tides. You may even see the tide line extending out in the waters around the point. This can sweep a paddler quickly out to sea and often the wind is different around the corner so things can get choppy fast. A good idea is to come to shore along Turtle's Cove (before the lighthouse) and either walk up the hill to the parking lot or turn around and head back to Ditch the way you came. 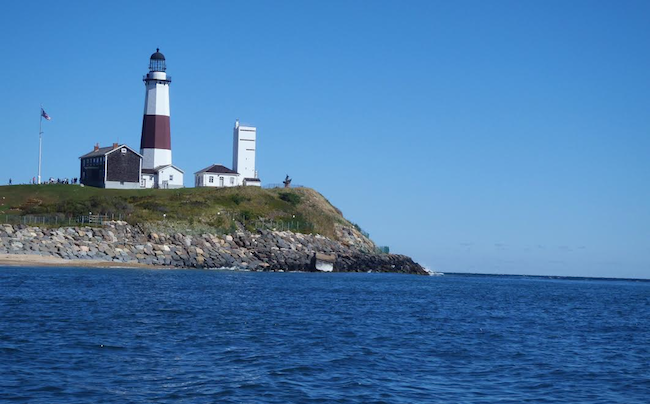 Remember to pack a light snack, plenty of water, a PFD for this ocean journey. There are often several fishing vessels on the waters around Montauk. Be respectful and give them safe distance.