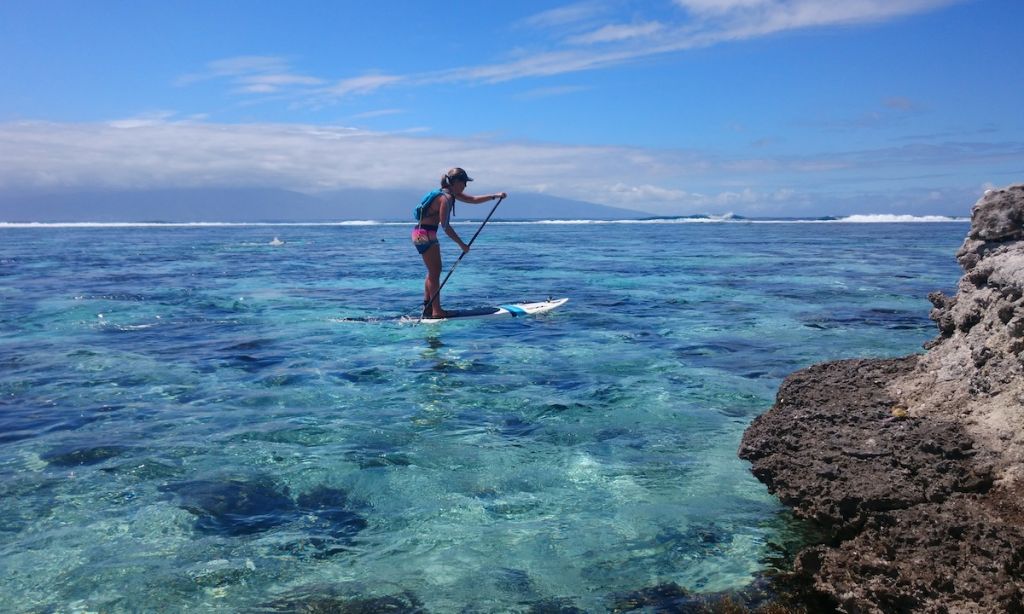 MOOREA, French Polynesia - The paradise in the middle of the Pacific Ocean served as the backdrop for Brazilian athlete Roberta Bosari's latest SUP Travessias Project adventure. After visiting Easter Island and circumnavigating Fernando de Noronha (Brazil), Brazilian athlete Roberta Borsari traveled to Moorea, one of the volcanic islands that form part of the French Polynesian territory in the Pacific Ocean, 17 km from Tahiti. She explored the beauties of the destination, which is rich in marine life, from her stand up paddle board (SUP) in the first week in October. The athlete made eight different trips around the island, traveling along its three sides and entering two large bays. Even with conditions varying because of strong winds and marine currents, Roberta managed to complete the navigations and have fun involving agreeable surprises, like an unusual encounter with a whale that jumped out of the water close to her while she was surfing and dolphins accompanying her as she paddled along.

The beauty of the marine life around Moorea was one of the highlights of the trip. Almost every time the athlete went out paddling, gliding through the crystal-clear waters of the island, she came across moray eels, sharks, sting rays and other different fish species.

During the expedition she was also able to get to know a little of the Polynesian culture, the origin of which is based on the local people’s journeys by boat throughout the Pacific. The Polynesians learned to navigate by following signs from nature and they were perhaps the first to use the stars to locate their position in the ocean. Unlike other destinations, Moorea still has its villages, archaeological sites and traditions. Between her paddling trips and diving, Roberta had close contact with families and local communities as she continued with her SUP travessias Project.

"Moorea is uncommonly beautiful, has abundant marine life and is the essence of Polynesian culture. I came back full of stories to tell about Tahitian traditions and their local legends. The trip was very interesting in this aspect, quite apart from being one of the most incredible destinations in which I’ve paddled", says Roberta.

For her expeditions the athlete chooses destinations according to their relevance in different aspects, whether historical, archaeological or because of their natural beauty. She already has various SUP crossings on the open sea in her résumé, including destinations like the Galápagos Islands, the Maldives and Alcatrazes (Brazil). The purpose of this project it is to offer others a real immersion in SUP in different landscapes.

To see more on Roberta Borsari and her SUP adventures, click here.