Awards
updated 7:00 AM PDT, Apr 13, 2021
Headlines:
A Perfect Example Of Why Paddle Boarders: There’s a huge debate going on in the SU
Molokai 2 Oahu Cancelled Again for 2021: For the second year the Molokai 2 Oahu (
Top 15 Locations for Paddle Boarding Thi: Summer is on its way, and with it comes
10 Intermediate Tips For Organizing Grea: Learn how to take your event to the next
How To Choose Your First SUP: Buying your first paddle board can be a
Weekly Recap 4/6/2021: Welcome to the Supconnect Weekly Recap,
What Makes A Quality SUP?: If you’re thinking of buying a paddle bo
River Running Basics on a SUP: If you’re testing the waters and interes
Are You Ready For The First Virtual Stan: Grab your SUP board and take part in one
How To Become A SUP Coach: As SUP grows through its variety of disc

The rivers, lakes and canals of the Netherlands offer amazing stand up paddle opportunities amidst historic and breathtaking backdrops. Read on to find the best spots then book your plane ticket to the 'low lands'. 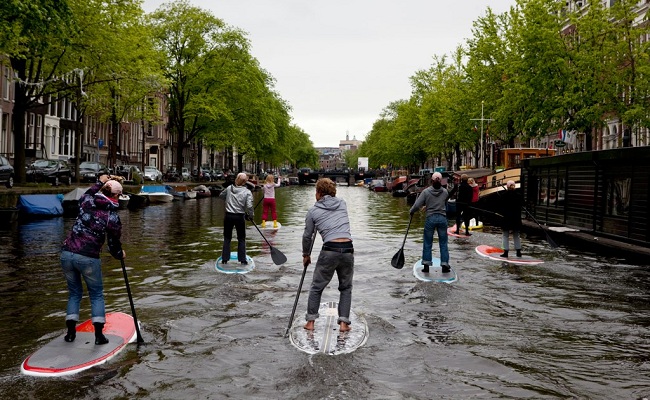 Intrepid paddlers roll up their pants and grab a board for the weekly Friday Night SUP in Amsterdam. Photo: Morene Dekker

Join the SUP Destination Group to talk about SUP in the Netherlands.

AMSTERDAM, The Netherlands - The best thing about stand up paddling is the fact that you can do it on just about any water. No perfect swell or wind conditions aligning with the tides, just water is enough. The Netherlands consists of a total area of 41,526 square kilometers, 7,700 square kilometers of that area is water in some form. This fact makes this little country a perfect stand up paddling destination. (Join the 101 Places to SUP Group)

The Netherlands is small but has a lot to offer to the stand up paddler. The only ‘problem’ we have here is our climate. The SUP season starts around March, when the water is still freezing, and ends at the end of October.

The spring months offer some of the most scenic SUP sessions in the countryside as this is when the tulips begin to blossom into a sea of color. During late March to mid-April (depending upon the previous winter’s temperatures), the area between Haarlem and Lisse can yield magnificent views as the countryside is swathed in blue, red, white, yellow and pink tulips.

One doesn’t conjure up images of windmills when thinking of the Netherlands for no reason. The country lies on the coast of the North Sea, a sea known for its mast-shredding winds and boat-sized chop. The summer months can be particularly windy but that doesn’t have to mean a grueling up-wind paddle. A boat can be taken up the IJsselmeer and an almost effortless down-winder can be enjoyed with the mighty winds at your back.

Winter is for finding a place to store your SUP and thinking about your next session after the snow has melted and the ice has broken. Unless you intend to turn your SUP into a racing sled, it is best to wait until the sun returns. (Add Morene Dekker as your friend on Supconnect)

Amsterdam
Cutting their way through Amsterdam’s golden-era buildings, cobblestone streets and adorned gables, lies an intricate network of canals. In the early 17th century, when Amsterdam experienced a rush of commercial success and a rapid influx of immigrants, four concentric half-circle canals were built. The inner-most three were added to the UNESCO World Heritage List in July of 2010 and consist of the Herengracht (Gentlemen’s Canal) the Keizersgracht (Emperor’s Canal) and the Prinsengracht (Prince’s Canal).

Along with the three canals mentioned above, the Brouwersgracht is also not to be missed. The Brouwersgracht, or Brewer’s canal, used to be home to the city’s large brewing industry, replete with storage warehouses and immaculate guild buildings. Today, the Brouwersgracht traces a watery path west from the heart of the city out to the Jordaan district.

The Amstel River
After paddling through Amsterdam a few times you might be up for a change. Starting at the Amstel and Prinsengracht intersection, paddle 15 minutes south and you’ll be surrounded by cows, grass, little villages and even some windmills. The meandering river takes you out of Amsterdam and past Amstelpark on your way to quiet Ouderkerk aan de Amstel, a peaceful village at the junction of the Amstel and Bullewijk Rivers.

IJsselmeer
Just a short drive from Amsterdam is the biggest lake in the Netherlands, the IJsselmeer. This large lake allows for a long SUP tour without seeing another person, perfect for meditation or just to enjoy the water and nature. With an average depth of 5 to 6 meters, the Ijsselmeer is also the largest lake in Western Europe. (View Sup Events in your Area.)

Utrecht
Another great city to SUP in the Netherlands is Utrecht. Although it can be a challenge in the summertime because of all the boats, it is worth the spectacular views of the city from the water. The main and not-to-be missed canal in Utrecht is the Oudegracht (Old Canal). It is lined with the unique wharf-basement structures that create a two-level street along the canals and gives the stand up paddler a unique experience from the canals of Amsterdam.

In Europe, city SUP is becoming very popular and lots of people are organizing special SUP city tours once a month, if not once a week during prime SUP season. It is a great way to meet other paddlers, get to know the sport and enjoy and explore a city. Even a city that you are familiar with, or have perhaps visited before, will take on a whole different character once viewed from a SUP.

Since the beginning of the current (2011) SUP season, stand up paddling has grown significantly in the Netherlands. There are several places where you can rent a board in the major towns of Amsterdam and Utrecht and almost every surf school along the coast has some rentals.

About Morene Dekker
Morene runs M&M Stand Up Paddling is located in IJburg which is just 15 minutes east of Amsterdam and located right at the canals and only 50 meters from the IJsselmeer. M&M SUP offers lessons and was the first to organize a Friday Night SUP in Amsterdam. Now there are also Friday Night SUP’s in cities like Delft and Leiden. Almost all the organizers have a few extra boards for rent so you can join if you would like.

Guiding Links & Other Information for The Netherlands

Do you have any experiences to share about SUP in the Netherlands?