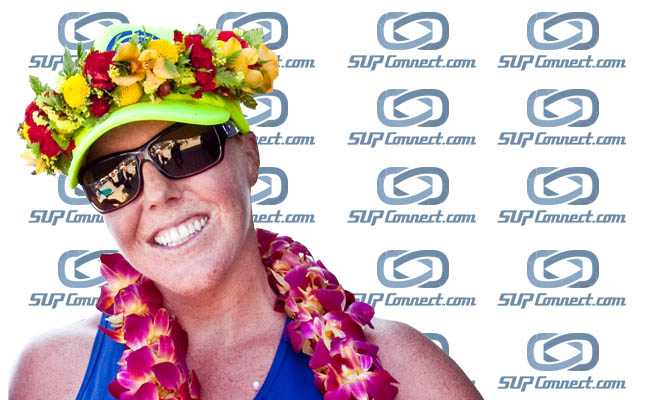 Her involvement, ambassadorship, and performance in the sport have remarkably earned her the title of Miss SUP of the Year. Another Miss SUP Nominee confessed to us that she has a picture of Appleby on her desk as a source of inspiration.

Appleby Makes History with Her Involvement, Ambassadorship and Performance

Candice Appleby all smiles after her victory in the women's elite division at the Battle of the Paddle, Dana Point. Photo: SupConnect.com

SAN DIEGO, California – In light of the great number of outstanding female stand up paddle athletes, crowning the first ever Miss SUP was no light task. Among the criteria on the table, involvement, ambassadorship, and performance were some of them, with performance not ranking as high as the former two. With that as the benchmark, there were several eligible names, making the choice excruciatingly difficult. Nevertheless, we believe Candice Appleby has done more than enough to earn the title of Miss SUP of the Year and to become the first ever female to bear that title. And as the first, we considered not only this year's accomplishments but also, and more importantly, her legacy in the broader history of stand up paddling. So here is why Candice Appleby. (Become friends with Candice Appleby on Sup Connect.)

When stand up paddle boarding events, like demos and contests, started to spring up in 2007, coming out of the islands and beginning to sweep California, the only noticeable female wholeheartedly committed to the sport was Appleby. In fact, in those early years, which seem an eternity by now, there were only a few individuals proudly wearing the SUP label due to the sport’s highly controversial relation to surfing. In those years, the lineup of stand up paddlers was even more male dominated than the surf lineup. To put it crudely, you had a few paddlers in the islands and California, plus Candice Appleby. For her early and unabashed commitment to stand up paddle boarding, she gets top marks on the involvement front. No other woman can claim such status in the modern history of stand up paddling.(Join the SUP Racing group on Sup Connect.)

But involvement isn’t all. Almost any event participant can tell you about highly involved but terribly “negative” members of the community. So, involvement alone is not enough. Miss SUP has to be a stellar ambassador for the sport in terms of her attitude as well. And Candice, here again, scores with flying colors. If you’ve ever had the honor of meeting Candice personally, you’ll find her to be a very cheerful and surprisingly welcoming character. And typically when she is visiting California, you’ll see her accompanied by her equally beautiful family, including her very supportive parents and charming nephews. Her boyfriend Fuzzy, too, an incredible waterman in his own right, exudes that cheerfulness and community spirit found in Candice. If you happen to be at an event with Appleby, don’t be shy. Give her the kudos for her Miss SUP title and be ready to meet one of the greatest ambassadors of the sport. (Become friends with Candice Appleby on Sup Connect.)

Then finally there is performance. This criterion is not highly ranked in our decision making, for we all (or at least many of us) feel a great sense of disappointment when top performing athletes turn out to be highly unpleasant, to put it lightly. But nevertheless, it’s important for Miss SUP to be proficient in the art of stand up paddling. The last thing you want is for the standard-bearer to bear low standards. Now that is not at all a concern with Appleby. Actually, the opposite is true. She is the highest performing woman athlete in the world of stand up paddling, both when it comes to racing and surfing. In 2008, in the C4 Waterman/Honolua SUP Surf Contest at Queen’s in Oahu, Appleby defeated world-class riders like Brian Keaulana (Makaha), Noland Martin (Makaha), and Noah Shimabukuro (Kula, Maui), eventually to earn a remarkable victory against an all male lineup. That top surf performance has continued since then, landing her in the Standup Surf World Tour and other stand up paddle surfing events across the map. And then there is the racing scene. In 2010, Appleby won the women’s elite division both in the Battle of the Paddle Hawaii and Dana Point, positioning herself as arguably the fastest female stand up paddler in the world. Her performance, ambassadorship, and involvement in the sport have remarkably earned her the title of Miss SUP of the Year. Another Miss SUP Nominee confessed to us that she has a picture of Appleby on her desk as a source of inspiration. We hope this title will help Appleby inspire many more women to become passionate athletes and ambassadors of this life-changing sport of ours. (Join the SUP Surf group on Sup Connect.)