In an age of media revolution, you cannot afford to be left behind. As one of the original standup paddle media outlets, reaching tens of thousands of people regularly, and having over 3,000 remote media outlets throughout the worldwide web, sponsorship on My Local Lineup SUP is a must-have feature for any company seriously considering to establish, maintain, or advance its place in the stand up paddle world.

Alexa.com is the world’s most trusted, independent website ranking engine, gauging overall traffic to a website but without taking into account video streams. That way of measurement puts Mylocallineup.com at a fair disadvantage since it relies heavily on video content. But nonetheless, Mylocallineup.com comes out as the world’s highest ranked media site that actively covers stand up paddling.

Alexa’s ranking works much like a podium, the lower the number the higher up on the podium one is, with, for example, Google standing all the way on top with a #1 ranking, followed by Facebook #2 … Twitter #12, and so on. Alexa’s ranking takes into accounts websites world wide and presents the world ranking and also regional ranking.

Benefits of Advertising on Sup TV

Stand Up Paddle TV, a product of My Local Lineup, was the first of its kind in the world, debuting initially on local cable television in San Diego and later made available online and world wide in response to the explosive global interest it sparked, confirming even further the broad appeal of our high-caliber video production.

Each one of the videos can be virally distributed with a click of a button, via email, through social networks, or by embedding it on other sites (see these functions live on player).

Seen Around the World

As a result of its high-caliber content and viral capabilities, Stand Up Paddle Paddle TV has witnessed about 1,500 views a day just within the first days of launching, with over 3,000 distribution points through the world wide web and being seen in over 75 countries, arguably becoming the world's most powerful and dynamic standup paddle media plaftorm. Advertising through Sup TV is a one shot solution to getting your company's name through over 3,000 websites spanning across the globe!

This is a short sample list for illustrative purposes

My Local Lineup relies on the most respected and influential players in the world of standup paddling when it comes down to its editorial content. Benefiting from its early and pivotal role in the growth of the sport, the company has a vast sup network, whose members grow the sport, spur innovation, and drive trends.

In addition to its editorial efforts, the company offers a robust social plaftform, which is integrated with Facebook. Many standup paddlers have expressed their frustration with Facebook in that they want to become friends with other standup paddlers, but don't want to give them access to their personal lives, with their wedding pictures, family, updates, etc. So, we've created the Facebook of SUP, where users can login with their Facebook account and befriend others where all we do is talk sup 24/7.

New media is the new dominant standard by which companies either rise or fall in today’s market. And by nearly all counts, My Local Lineup SUP is undoubtedly helping lead the way on the new media of stand up paddling, whether it be on website ranking, online TV, cable TV, or the breadth of web content. Sponsorship on My Local Lineup is a must-have feature for any company seriously considering to establish, maintain, or advance its place in the stand up paddle industry

Our motto is: "always look for the better stroke." Following that principal through our daily work has earned us an impressive (and arguably, unmatched) record of media achievements, especially as they relate to our standup paddle media efforts. Covering the sport when others deliberately avoided, presenting in-house multi-media editorial content when others offer only forum, blog, or press release material, and pushing toward new frontiers like cable & online television when others were content with simply print and almost-never-upgraded web features have made us a leader in standup paddle media. The record speaks for itself.

In 2007, the year My Local Lineup was founded, when wooden paddles were still widely used, sup races largely done on surfboards, and virtually no media wanted to touch the sport, we were there on the field, among the few standup paddlers around, witnessing and giving media coverage to the explosive growth of the sport, and seeing standup paddling go from our small group of friends to unthinkable corners of the world.

In 2008, while proudly putting standup paddling on the spotlight and delivering a major upgrade to our online platform, we, being only a few years old, overtook decade old names like Rusty's and Surfer's Journal on web traffic and came within inches of reaching leading media websites like Surfing Magazine’s site.


Cable TV show hits the screens during primetime and weekends

In that same year, we expanded to offer not only web content but also a cable television show in San Diego, one of (if not the) the action sports Mecca of the world, where hundreds of industry headquarters converge not only to call their home, but also for numerous trade shows, industry meetings, public fairs, and more. That positioned My Local Lineup TV as a key player in reaching both a highly populated and dedicated action sports community.

Cable TV quadruples in airtime due to demand

In just a matter of weeks, the network quadrupled our airtime as a result of demand. Given the millions of people we were reaching and the degree to which the community is invested in water sports, My Local Lineup TV quickly became a regular feature playing regularly throughout millions of homes in San Diego County.

In 2009, we continued to expand and take standup paddling to new frontiers by launching the world's first standup paddle television, at this point on cable TV. Standup Paddle TV began airing to 1 million homes in San Diego County, amounting to a reach of about 3 million people, including prime time and weekends.

In 2010, and again, due to demand, Standup Paddle TV later was made available online, becoming a wild success, with 1,500 views a day already in the first two days of its release, turning into what it is today, with over 3,000 distribution points on the world wide web and being seen in over 75 countries, arguably earning the title of the world’s most powerful and dynamic standup paddle media platform.

Exclusive section for sup is released with unprecedented content & features

Also in 2010, we debuted the SUP section of the website, presenting an unprecedented amount of features and a barrage of content, all of which could have been easily labeled the world’s largest standup paddle venue on the web.

With only three years of existence and with far less resources, My Local Lineup overtakes Surfing Magazine in website ranking, making early 2010 a historical time for the company and proving even further how My Local Lineup’s dynamic, creative, and industrious mode of operation delivers results.

Later, we joined hands with Clay Feeter’s Standup Journal, presenting a web/print alliance and forming the world’s largest media bloc in standup paddling. The Journal's pioneering role as the first publication to actively cover the sport and My Local Lineup's leading role on the web and with Sup TV had two frontiersmen join hands to continue to take standup paddling to new heights.

On October, 2010, we made history for the sport once again. We became the first website, of all sites that actively cover sup, to enter the world’s top 100,000+ group of websites in online traffic, with Standup Paddle TV as its top content, showing how the popularity of the sport is reaching ever increasing demographics.

Now, as we continue with our breathtaking impetus of always looking for the better stroke, we’re proud to present one of our greatest product releases, our new and all exciting online platform for standup paddling called ‘Sup Connect.’ Sup Connect contains both editorial content and a social network integrated with Facebook. On the editorial front, the site offers articles of contributors from all over the world, plus it also relies on the excellent work of Clay Feeter, the publisher of Standup Journal. In addition, it’s the new home of Standup Paddle TV, the first and leading video source for the sport worldwide. On the social network front, users can interact with one another via friendships, group discussions, photo sharing, video posting, event registration, and more, boosting the information flow, facilitating community involvement, and serving as a resource for paddlers to grow even more connected.

Many call themselves leaders of sup media. We rather let the record speak for itself

Connecting Paddlers Around the World to Help Us Grow More Connected and Stronger as a Community. 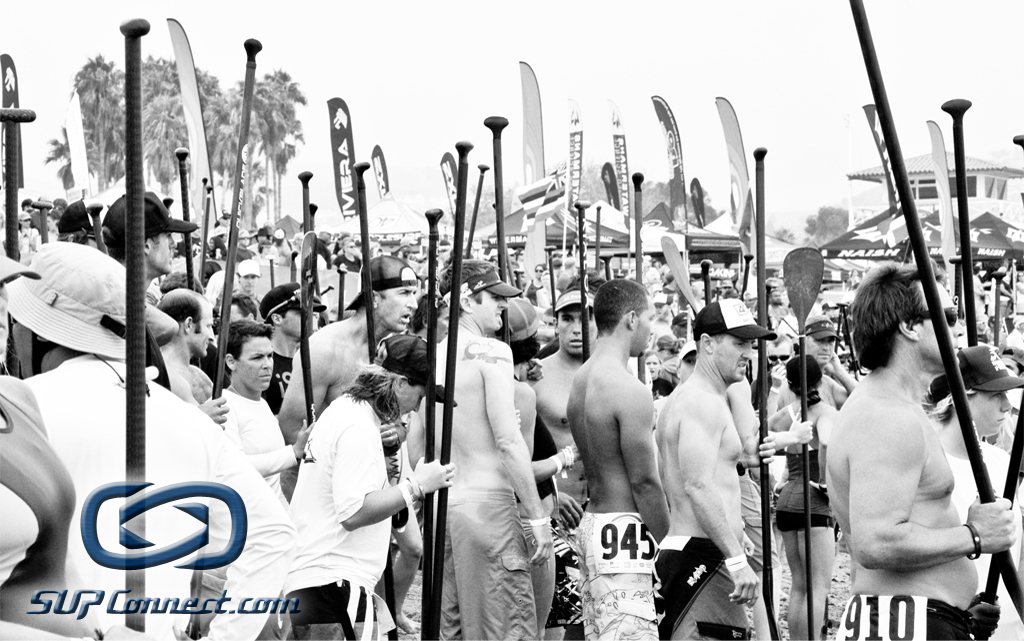 Standup paddlers at the Battle of the Paddle in Dana Point, CA during the relay race on October, 2010. Photo: Andre Niemeyer

In 2007, the year My Local Lineup was founded, when wooden paddles were still widely used, sup races largely done on surfboards, and virtually no media company wanted to touch the sport due to its highly controversial relation with surfing, we were there on the field, among the few standup paddlers around, witnessing and giving media coverage to the explosive growth of the sport, and seeing standup paddling go from our small group of friends to unthinkable corners of the world.

Since then, we've worked relentlessly in our service to the standup paddle community, a work that has led us to launch the world's first Standup Paddle TV (both on cable and online), a feature loaded section on our website exclusively dedicated to standup paddling, and now a revolutionizing online platform through Sup Connect. Today, among Standup Paddle TV, Sup Connect, and our alliance with the Standup Journal, our media arm spans over television, web, and print. (Visit Achievements for more on company history.)

Sup Connect is the online stand up paddle arm of My Local Lineup, an action sports media company based in San Diego, whose trademark is its all-inclusive and socially oriented approach to water sports. Through SupConnect.com, the company offers several resources for standup paddlers around the world, including Standup Paddle TV, an Online Standup Paddle Community, Tutorials, and more. My Local Lineup also features Standup Paddle TV on its cable television show on iTV channel 16 in San Diego County. (Read about company's president, Andre Niemeyer.)

Advertising packages with My Local Lineup are all dynamic in that they are constantly being upgraded to be on par with some of the latest technology. That's why it's important to consider the advertising tier over the items in it. Have the piece of mind of knowing that there is someone working round the clock to present your company's name thru some of the latest and greatest media technology available.