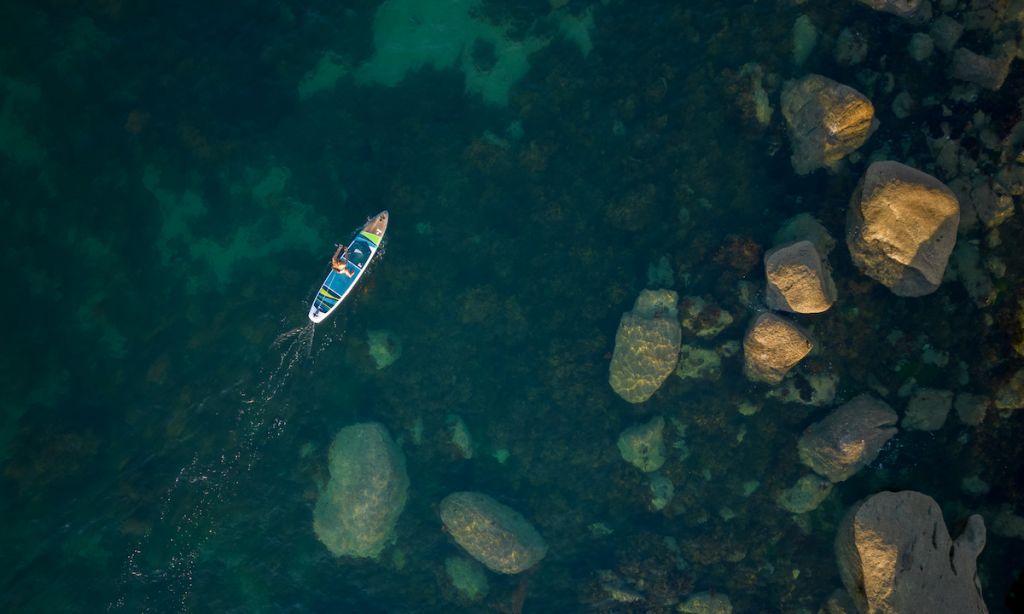 Identifying saltwater fish while swimming among them is hard enough; identifying them from a paddle board, using what is usually only a quick glance from above, is even harder. The oceans are home to the vast majority of Earth’s animal life and a staggering amount of biodiversity. Even just the tropical coral reefs, the most popular destination for fish spotting, are home to more than 4,000 unique species of fish and other animals. 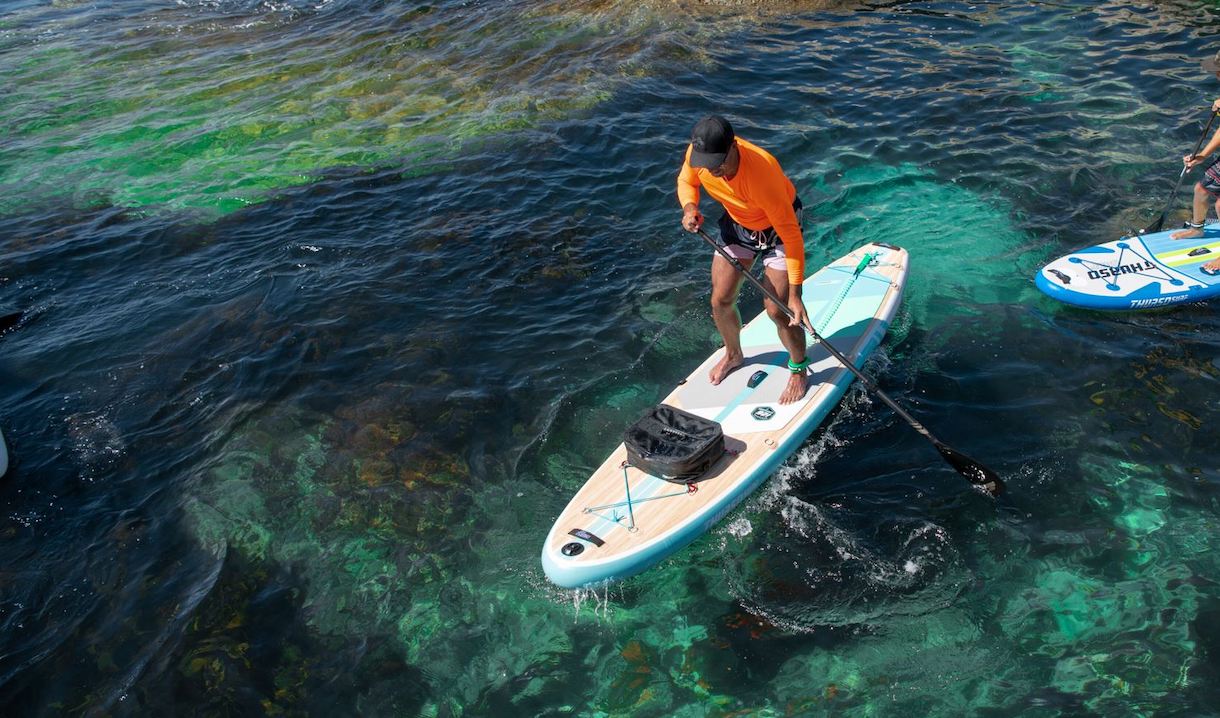 In this article, we’ve grouped many of those 4,000 species into seven categories, connected by either genetic or visual ties, to help you identify at least the type of fish you saw, if not the exact species. Note that this list is far from exhaustive; for one thing, we’ve left off bottom-dwelling species like flounders and wrasse that you are unlikely to spot from a paddle board. Of course, that still leaves many, many fish to spot, identify, and enjoy. 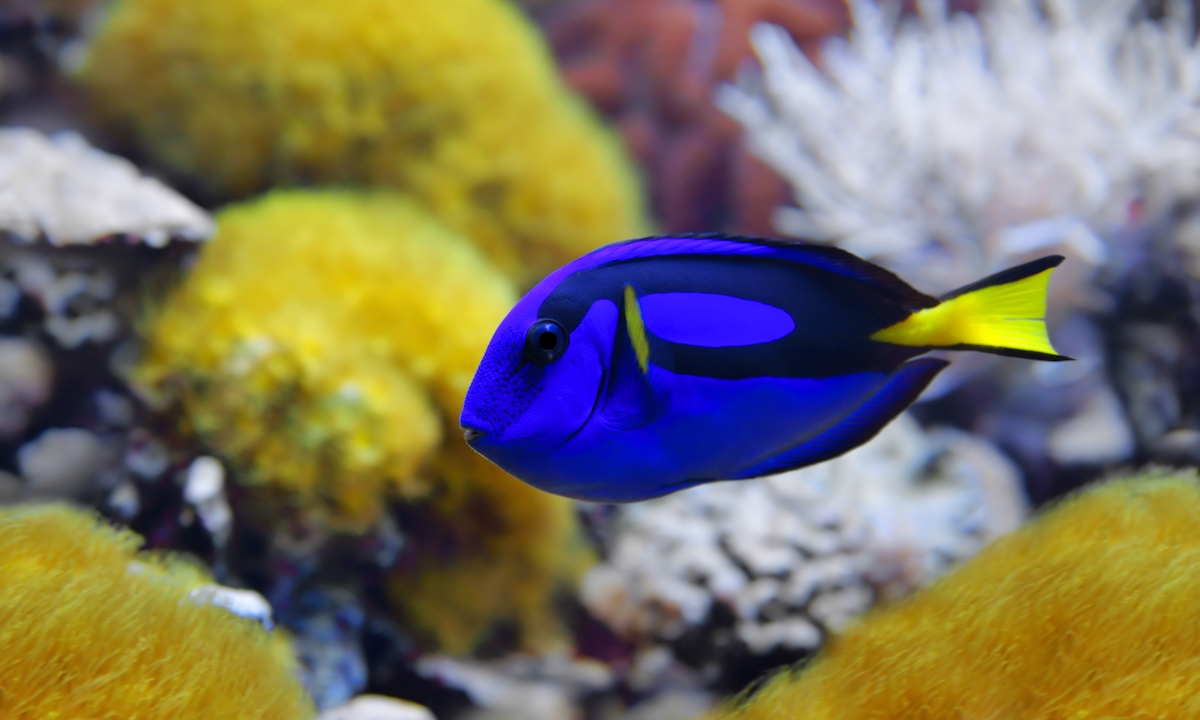 This first group of fish is connected only by appearances, not genetics or ancestry. Angelfish, butterflyfish, and surgeonfish are all brightly colored, with small mouths and round, flat bodies shaped like coins. All three include species popular in aquariums for their bright colors, unique patterns, and beautiful fins. The most distinctive angelfish is probably the emperor angelfish, which is a good example of the family’s distinctively towering, pointed dorsal fins. 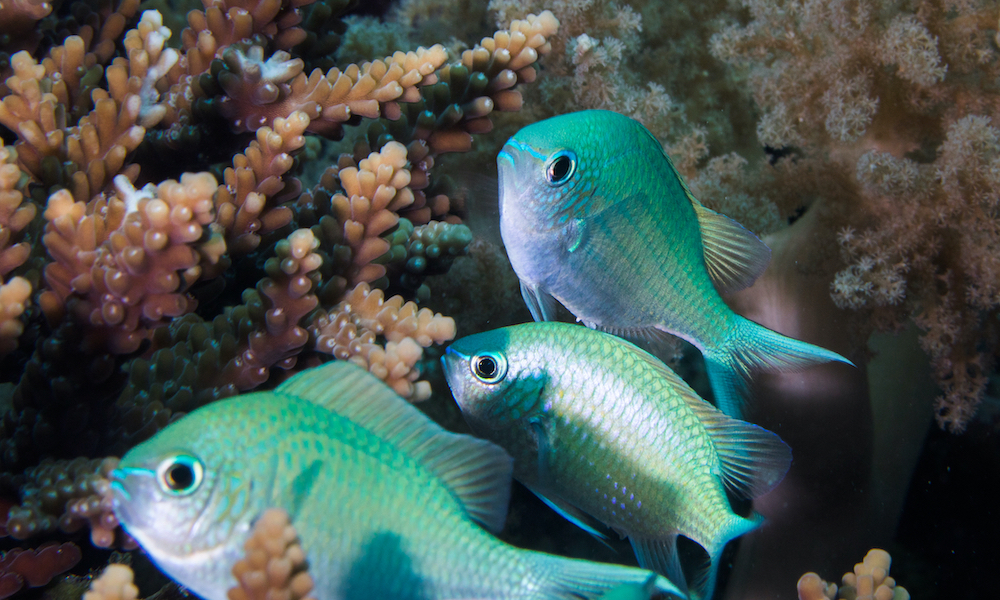 You’re very likely to see some chromis fish if you’re paddling over a tropical reef, but somewhat unlikely to get a good enough glimpse to identify them beyond that; these small, fast-moving fish are hard to see up close unless you are scuba diving or maybe snorkeling. If you do see them, you’ll be able to recognize them as members of the chromis genus by their small size – less than a foot in length, usually much less – oblong body shape, and bright colors. They tend to move rapidly in between the crevices and hiding places within the reef and can be quite territorial, especially those classified as damselfish.

If you want to get a better look at some, you can check out most saltwater home aquariums, where their hardiness and bright colors make them very popular. 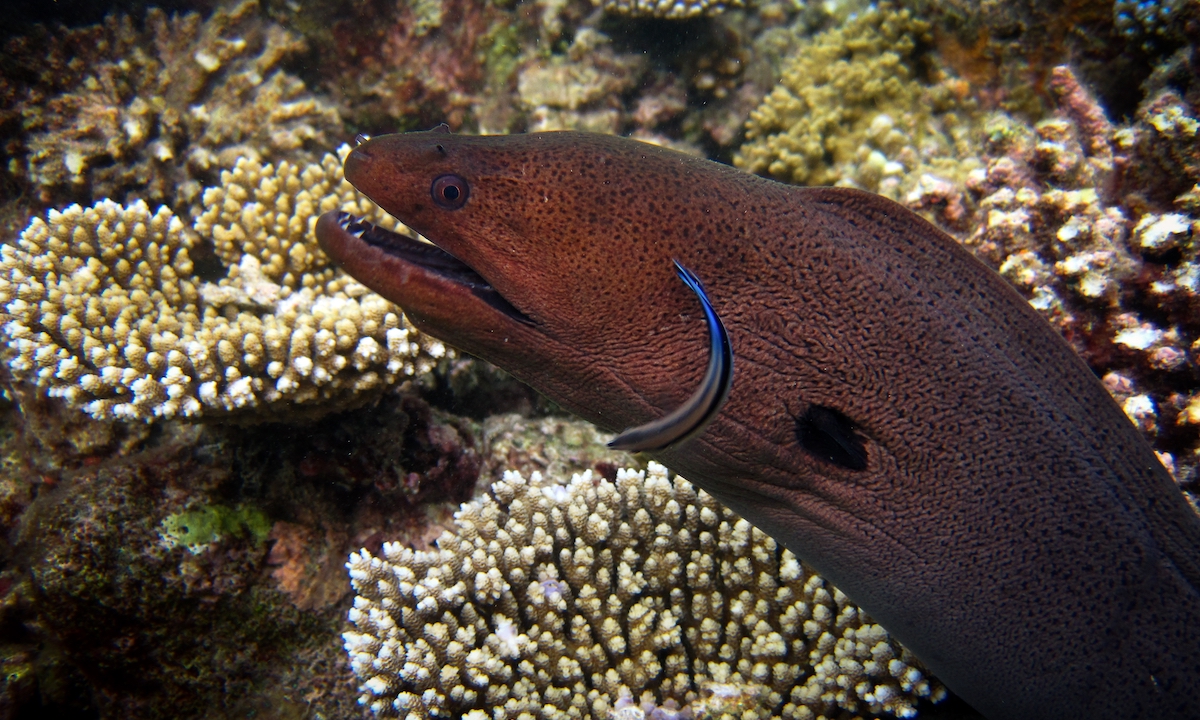 True eels can range in length from a few inches to more than 10 feet – although that massive species, the slender-bodied giant moray, prefers muddy river beds to the open ocean.

This group is something of a catch-all, comprised of four species of reef-dwelling fish that are actually not at all related. However, these large, silver predators all look similar and can be easily confused for each other, so we’ve grouped them together. You may not be able to identify exactly which one of these four you’ve seen, but you’ll know it’s one of them by their long, silver bodies and forked tails. Barracuda are easily distinguished by their thin bodies and thinner snouts full of intimidatingly sharp teeth.

Jacks are perhaps the one you are most likely to see, as they like to hang out in schools near sharp drop-offs at the edge of the reef; you can recognize them by their rounded foreheads, flat faces, and prominent lateral lines.

Porgies and chubs have similarly shaped oblong bodies, but paddle boarders are much more likely to see chubs, as they favor the surface of the water, while porgies prefer to stalk the seabed. 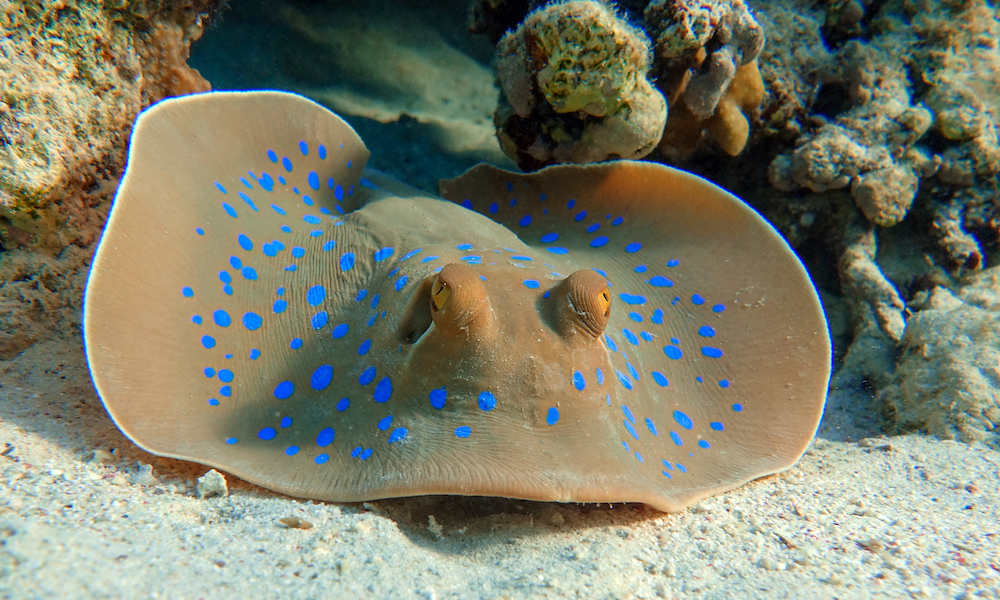 Rays look like what happens if you cross a fish with a pancake, and then also maybe a bird. They are easily identified by their flat, circular bodies, and the way they move through the water by flapping their large, fused pectoral fins like wings. The largest species, the giant oceanic manta ray, can reach 18 feet across, but more common rays tend to be a few feet across, or smaller.

Because there are over 600 species of ray, there are many, many different variations to spot, but they can be hard to see from a paddle board, as they tend to prefer the sea floor to the surface of the water – though some species, like devil rays, can occasionally be seen breaching the water in remarkable jumps of several feet. 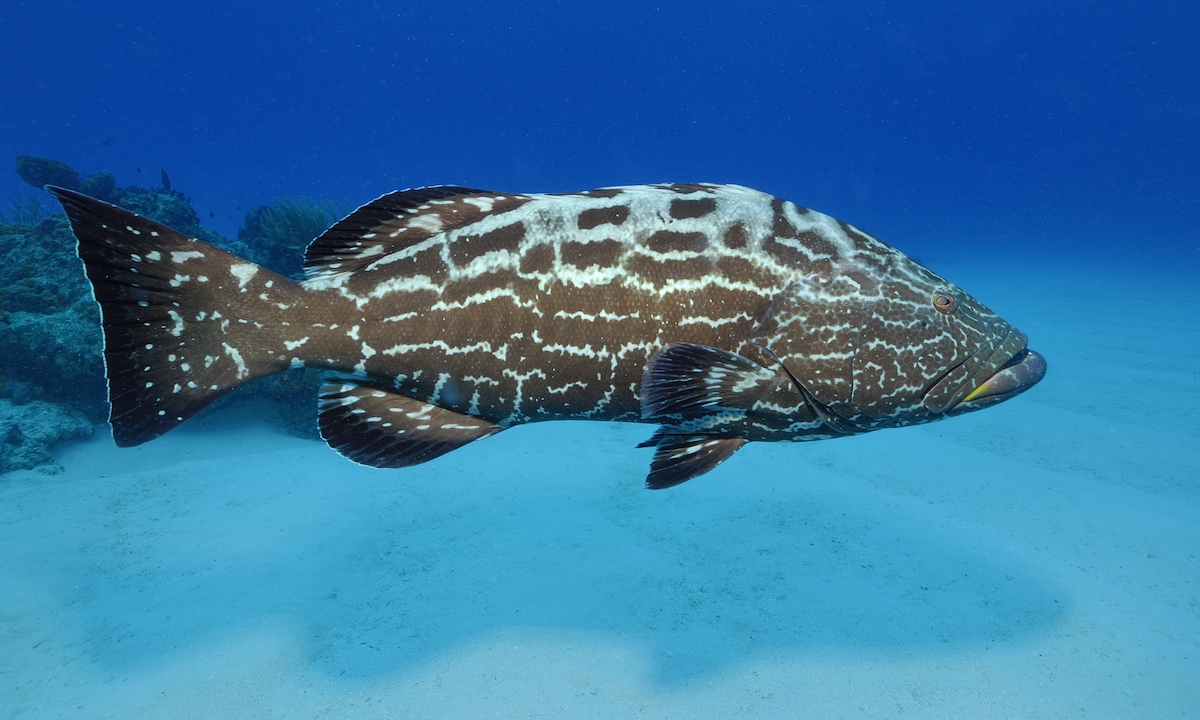 The most distinctive members of the serranid family are the groupers, who also constitute the large majority of the fish in this family. Groupers are distinguishable by their wide mouths and the heavy lips they use instead of teeth to crush their prey. Though most are much smaller, the largest groupers can weigh almost 1000 pounds and reach lengths of up to eight feet.

The other large group within the serranids are the sea basses, although it should be noted that some fish called sea bass actually belong to different families. Serranid sea bass are generally oblong, with sloping foreheads and stripes, often on a pale, reddish-colored body.

Like their close relatives, the rays, sharks are easy to identify because they have one of the most iconic silhouettes in the ocean. They generally have solid, torpedo-shaped bodies and a sharply pointed dorsal fin that, yes, can sometimes be seen sticking out above the surface of the water. You can also identify sharks by the forked tails that they swish back and forth to swim forwards – though never backwards.

If you do see a shark while in the ocean, don’t panic! Although sharks are definitely dangerous, they rarely attack humans and, despite what scientists used to think, probably never mistake surfers and paddle boarders for seals, though you should probably make your way back to your boat if you see one, just in case.

Image via POP Board Co.

Paddle boarding over a tropical reef is one of the most surreal, almost indescribable experiences out there. Most people who try it, though, still want to at least attempt to describe it to those they left back on dry land. Hopefully this list will help you get the most out of your ocean paddle boarding experience by giving you names to put to the beautiful creatures you see.

More in this category: « 4 Tips For Bass Fishing From Your SUP: A Beginner’s Guide Everything You Need To Know About Cold Weather Paddle Boarding »