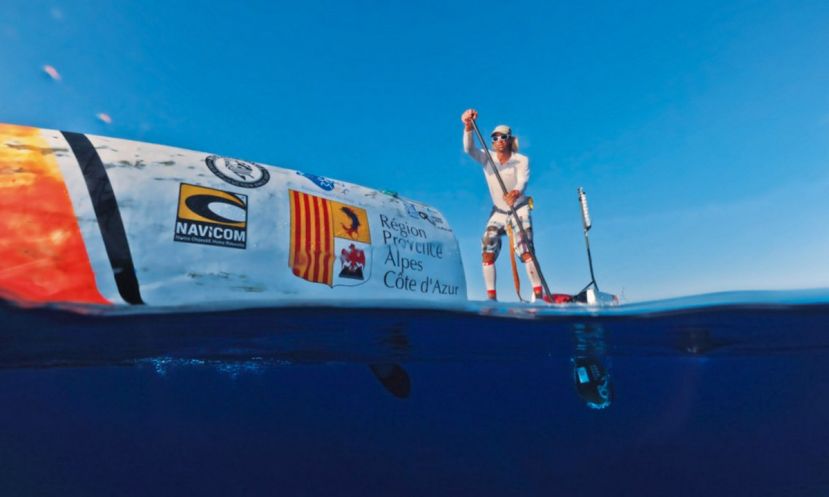 Nicolas Jarossay during a practice run on his vessel. | Photo: © Septentrion Environnement

CAPE VERDE, Africa - After years of preparation and training, Frenchman Nicolas Jarossay was set to take to the water and attempt to be the first person to cross the Atlantic Ocean, solo and unsupported, on a stand up paddle board. Jarossay, a firefighter by profession, has been planning this trip for over two years. On April 10, 2016, Jarossay set off on his expedition in favorable weather and conditions but unfortunately, and for reasons still unknown, a broken rudder system caused Jarossay’s vessel to capsize forcing him to enable his distress beacon only 24 hours after launch.

“Nicolas took the sea Sunday 10 April, 2016 by favorable weather conditions. For a reason, which is still undetermined at this stage, the system of rudder has suddenly broken and has exposed the boat through the middle to a flood. The boat capsized. All attempts to put her back afloat are in vain and then more and more exhausting.

The continuing deterioration of the situation (exhaustion, hypothermia, night) has made unfortunately inevitable the outbreak of the distress beacon. The chain of relief could be mobilized in an orderly manner, in a context of great modesty of resources available in Cape Verde, severe technical constraints, and admirable dedication of rescuers.

Nicolas is safe and sound. In collaboration with the embassy of France, he organizes itself to regain the hexagon. The analysis of technical reasons that have been an obstacle to this first attempt will soon be committed. Nicolas wishes to express its appreciation to the rescuers, including the coast guard Cape Verdeans.”

Stay tuned for more updates on this expedition as more information becomes available.

To learn more about Nicolas Jarossay and his Expedition, click HERE.

More in this category: « 300 Locals To Join L.A. Waterkeeper For Fifth Annual Stand Up For Clean Water Race The Lake Of The Sky Postponed Until 2017 »