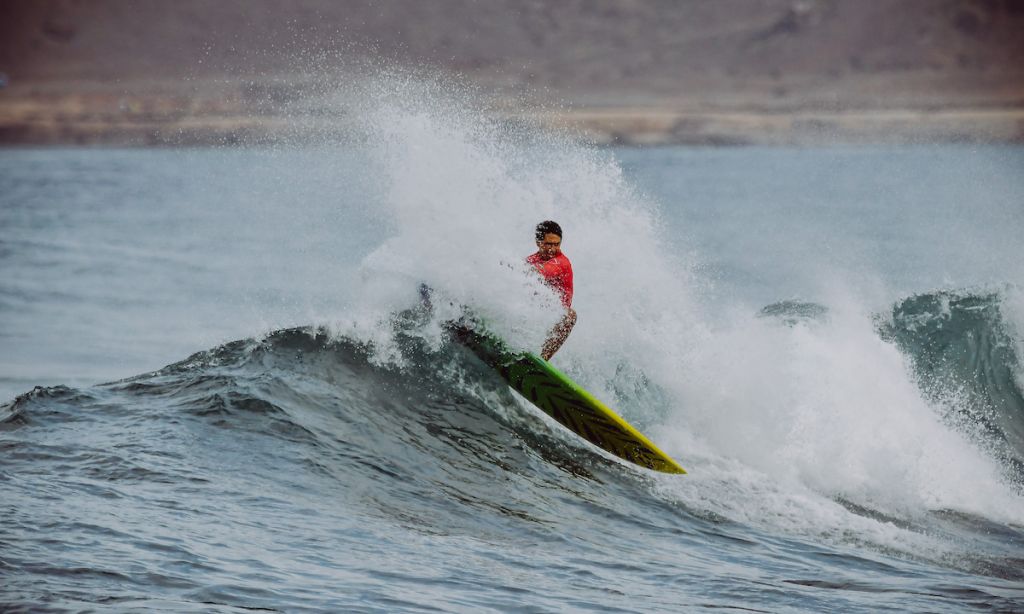 GRAN CANARIA, Spain - The Gran Canaria Pro-Am, 4th and last event of the 2019 APP World Tour, has delivered some amazing action this past weekend in perfect waves of Las Palmas. The event was dominated by the impressive Brazilian Wellington Reis and the local legend Iballa Moreno. And, with a 3rd place at this event, the Tahitian Poenaiki Raioha ends the 2019 season by winning his first APP World Title in a very emotional moment.

After a long day of competition for round 1 and 2 at the main break of La Cicer in solid 6 ft+ wave conditions, the local organization of Björn Dunkerbeck Team and APP crew decided to move venues for the remainder of the event to the reef break El Lloret, located 400m west on the other side of the long jetty. Last year, this spot delivered some epic conditions for the last day of competition and all the athletes were frothing to get the same kind of waves with a nice long period swell approaching.

The answer came on Saturday morning with some very solid 8-10ft right handers peeling along the reef for more than 300m with very soft winds. Rounds 3 and 4 were launched at 9am and saw some crazy rides with impressive commitment from the surfers who were really happy to surf this wave again. The show was on during the whole day with incredible drops and very spectacular maneuvers. One of the most anticipated heats of the day saw the 2012 World Champion Leco Salazar from Brazil playing his A-game against the Hawaiian talented rider Mo Freitas. The Brazilian competitor used his very sharp and powerful backside surfing to take advantage and get his ticket to the quarterfinals.

Last year, winner and leader of the rankings Poenaiki Raioha also made a huge demonstration of his talent to the weekend crowd of Las Palmas and secured his qualification for the next round. 2018 World champion Sean Poynter, Spaniard Guillermo Robello, APP number 2 Luis Diniz and his very impressive Brazilian fellow Wellington Reis and French team-mates Benoit Carpentier and Clément Roseyro also won their match ups and earned the privilege to surf on the final day. 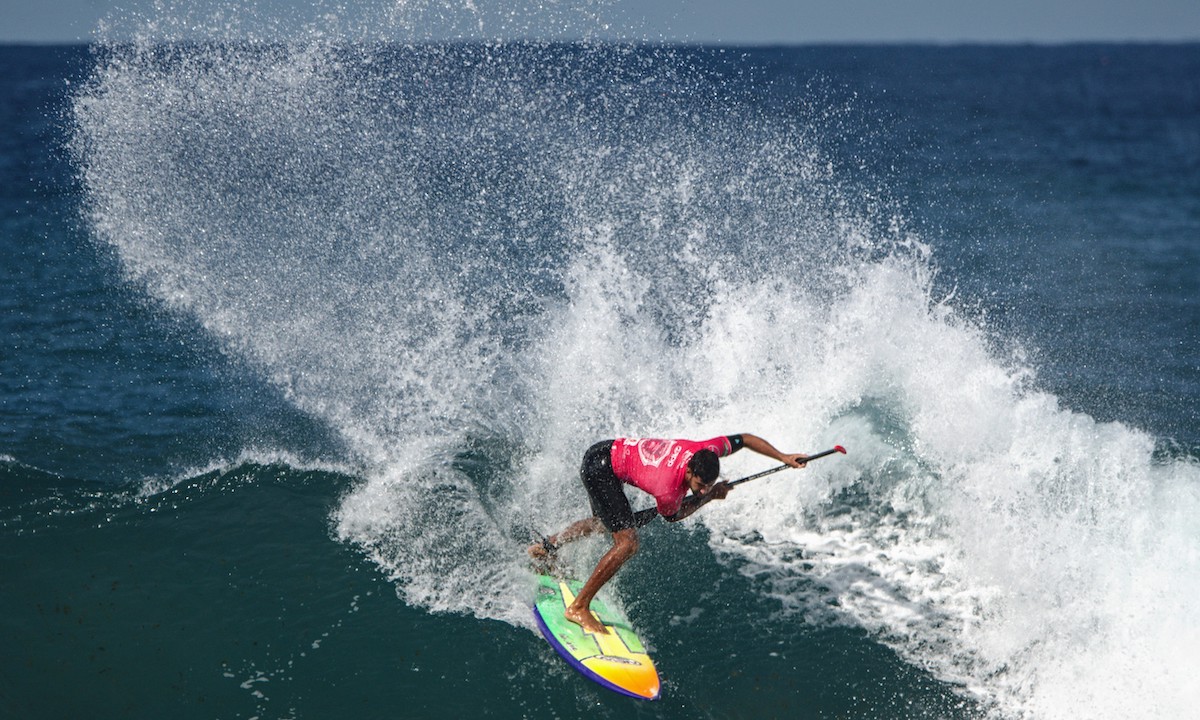 The swell dropped a little bit during the night but got cleaner with off shore light winds and everyone was amazed Sunday morning by the quality of the waves at El Lloret break. Poenaiki Raioha was the first in action and got one step closer to clinching his first World Title by defeating the young goofy footer Roseyro while the Brazilian contingent Wellington Reis, Leco Salazar and Luis Diniz continued their road to the Final with incredible backside demonstrations that put Poynter, Carpentier and Robello out of the competition.

The semi-finals were launched immediately thereafter and, in one of the most competitive heats ever witnessed on the APP World Tour, Poenaiki and Wellington Reis went blow for blow on the perfect right hand point break. Despite having a 9.4 in his score line, the Tahitian rider was unable to get past the local rider from Sao Paulo who surfed at his best level and delivered a mind-blowing performance. This elimination meant that the Title Race between Luis Diniz and Poenaiki would go on, and left the rider from Papaeno in the unenviable position of waiting to see what would unfold in the next heat.

Fortunately for the young Tahitian, he wasn't going to have to wait long, as a late surge from Santos local Leco Salazar knocked out fellow patriot Diniz, securing his berth in the Final and giving a well-deserved 2019 APP World Title to Poenaiki. After being very close for several years now, the stars have finally aligned and Poenaiki is sitting on top of the World. The whole crowd erupted in front of El Lloret and were celebrating with laughs and cheering on the new champion while, in a very emotional moment, Poenaiki let the pressure go and went in his grandfather’s arms in tears. After 9 years on the tour with a first appearance at 13 years old in the legendary Sapinus Pro, Poenaïki has reached his goal by clinching the APP World Title.

The competition was not over yet as the 100% Brazilian final was launched in pumping conditions. From beginning to the end, Wellington Reis put on a performance for the ages, posting a perfect 10 and a 9.4 to dominate his battle against Leco Salazar and get his first APP event victory with an incredible surfing. It was an extremely well-deserved victory for the talented Brazilian who finished his successful season with a well deserved 2nd place overall for 2019 and he probably will now set his sights on the 2020 World Title, that’s for sure! 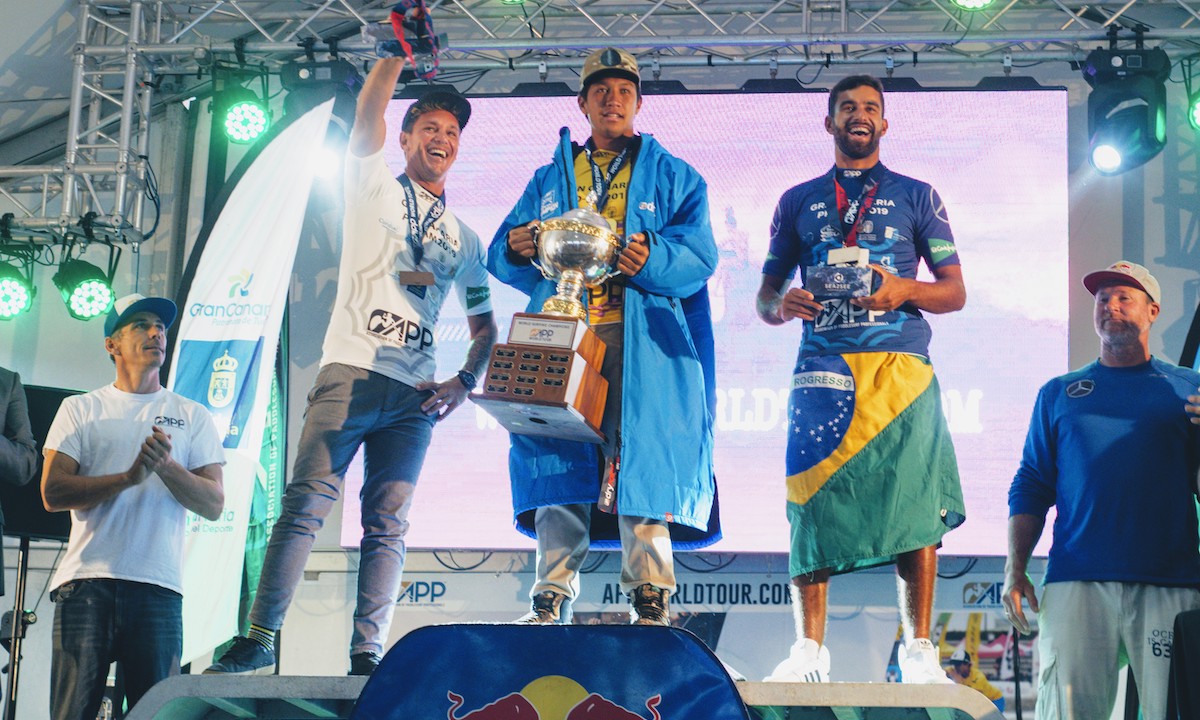 After a slow start in the first part of the season, 2018 World Champion Iballa Moreno came back really strong in the Barbados event with a great 3rd place and was definitely one of the favorites for this last event of the year organized at home in Gran Canaria. We still have in mind her awesome level of surfing at El Lloret last year and strengthened by the support of her family and friends, Iballa put on stellar performances through the rounds, with great scores. After a great Round 3 win against Australia's Shakira Westdorp and very solid semi-final against the talented young Peruvian Vania Torres, Iballa earned her spot in the final where she would have to challenge the newly crowned World Champion Izzi Gomez on what looked like a re-match of last year's final.

Conditions were almost as perfect for this Sunday but the scenario of the heat was the exact opposite as the Canarian local dominated the whole battle, taking the biggest set waves with a great combination of maneuvers, securing her an amazing win in front of her home crowd. Iballa returned to the beach to be greeted by friends and family, representing the host venue of Gran Canaria in incredible fashion here once again, with a victory that catapults her up into a 2nd place finish Overall for 2019. What an incredible achievement for this Canarian local, and while she is no stranger to World Championship Tour victories (having won multiple Windsurfing World Titles over the years), but this victory in front of a home crowd and in such great conditions, is definitely one to savor.

The consolation final also showed how the level of women SUP-surfing has increased over the last few years with a very nice backhand top turn demonstration of the Peruvian Vania Torres who took advantage of Brazilian Gabi Sztamfater carving great on her front hand. With their round 3 loss, the American Fiona Wylde and the Australian Shakira Westdorp end the season with a 4th and a 5th place respectively. 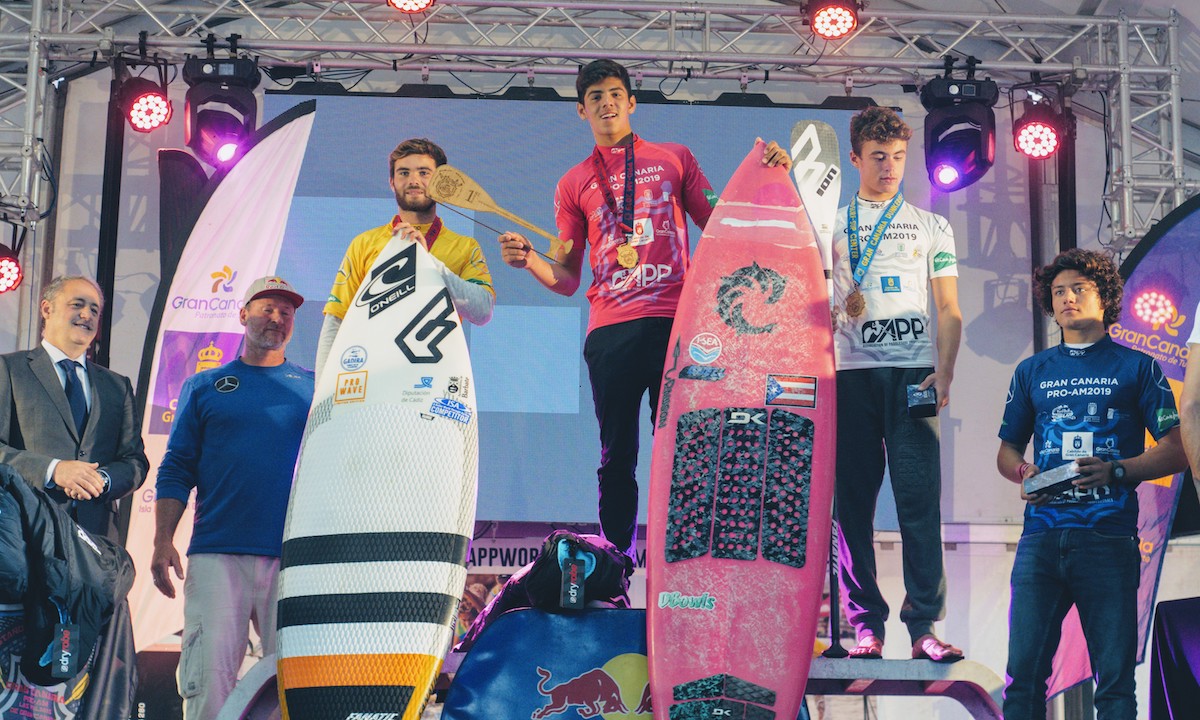 The under 18 competition was launched just after the men and women finals with waves of El Lloret still firing. The level and the ease of those young riders was simply unbelievable and the whole crowd was cheering loud on each wave surfed. Revealed to the world in February at the first event of the season at Sunset, the Puerto-Rican Maximilian Torres showed one more time his incredible talent and won the high level junior final heat against Spanish Juan De los Reyes, Fernando Serra Perrez and French Arthur Lemenn. Those four riders showed the future of stand up paddle surfing and closed this amazing non-stop day of competition in the best way possible. 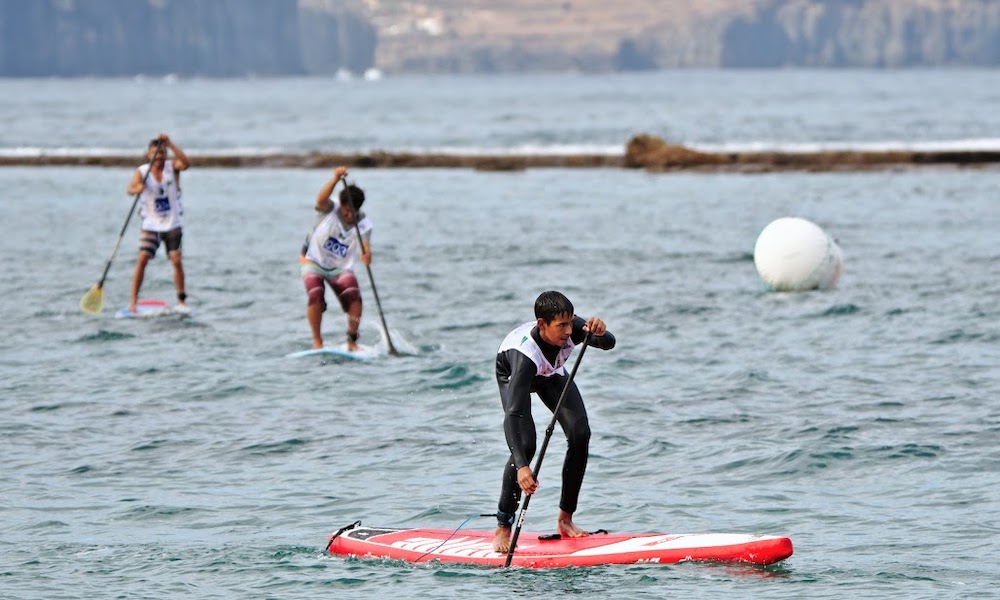 The Gran Canaria Pro-Am is not only about SUP-surfing as Sunday also saw an inaugural Technical Race format with inflatable Boards. Amateurs and Elite riders met on the sunny morning in Las Canteras, on the same beach as La Cicer, the main spot of the event, but further east, where the outside rock barrier breaks the swell and makes an awesome flatwater playground suitable for everyone. The competitors started from the beach for a 10km course with 5 laps inside the lagoon with a very strong pace and lots of glide on their inflatable race boards. In a very spectacular battle against his fellow patriot Carsten Kurmis and his dad Fridjof, the young German Maui Sach took the lead and keep pushing hard til the finish line to secure a great win in this first inflatable world games race format. Also participating in the junior and main event in SUP-surfing, the local young waterman Liam Dunkerbeck, son of the legendary windsurfer Björn Dunkerbeck, showed again his huge versatility and won the junior (under16) race with impressive paddling.

From beginners to pros, everyone had some good fun together on the water and challenged themselves on this new very promising race format, confirming, once again, the great performance of the inflatable boards nowadays. With the very easy-to-carry proprieties they have that fit perfectly for people to come by plane to a place like Gran Canaria, race and enjoy the journey. This format has definitely a great future and will grow each year.

That’s a wrap for the 2019 Gran Canaria event that has become in less than two years with amazing surf conditions, one of the favorite venues for the whole world tour competitors, who really love the waves, the organization and the very relaxed atmosphere of Las Palmas. The hardest part now is to wait 12 more months to see if the Canarian surf breaks will be on fire once again!