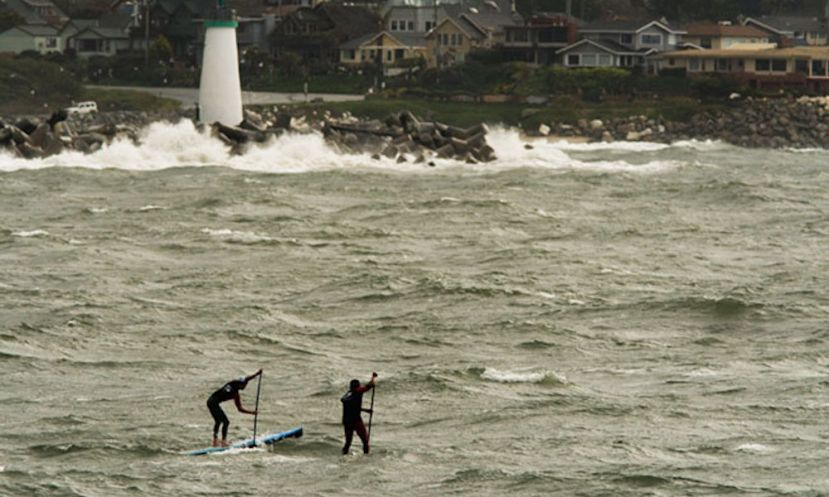 Matt Becker (left), riding his Bark, and Anthony Vella (right), his M2, during the first leg of the race. Photo: Supconnect.com

Crushing shorebreak, hail and 20mph winds were just some of the climatic challenges

Watch the Race on Stand Up Paddle TV

SANTA CRUZ, California – Pouring rain, hail, and 20mph winds were just some of the challenges the stand up paddle racers had to face at the Surftech Sand & Duel-athlon on Saturday, March 19th, 2011. Add to the challenge a sea of wind chop, with bumps coming from all directions, plus a head-high shorebreak, and perhaps you’ll begin to get the picture of this highly challenging chapter of stand up paddle racing history. “We came inches to canceling the race, but since no competitors complained we decided to go ahead,” said race director, Duke Brouwer. (Join the Sup Racing group on Supconnect.)

Part of the original plan, hence the name Sand & Duel-athlon, was to incorporate a beach run with the sup race. However, the shorebreak was so difficult to overcome – in fact, by some, completely impenetrable – that the sand part of the event was scrapped and reduced to a beach start and finish. But that alone became an insurmountable hurdle for many racers, who, after unsuccessfully trying to get passed the waves, decided to call it the day and watch the sup jousting from a distance. To add even more to the unpredictable layout of the race, some competitors had to push around some seals to be able to hold their line. “I had to use my paddle on some of the seals, so I could keep paddling,” said Matt Becker, a standout racer from Santa Barbara, who finished top 10 in both of the Battle of the Paddles in 2010.

And Becker, with or without the help of the seals, was dictating the pace of the race during the whole course. In the first half, Anthony Vella, from Los Angeles and the current leader of the SoCal Ocean Racing Series, was going almost shoulder to shoulder with Becker, even during the short course of the race, when Becker led the wrong line and ended up setting nearly all competitors off course. But once the lifeguards rerouted the paddlers into the right course, Vella still remained a threat for Becker, with Hood River local and rapids expert, Dan Gavere, keeping the duo in sight. When the race leaders came around the end of the short leg of the course, Becker, partly with the help of a strong downwind push, and thanks to his lightweight build, was able to gain a substantial lead and maintain a comfortable margin to those in his tail. And as the leaders fought it out through the final strokes of the race, Gavere gained on Vella and the race finished with Becker, Gavere, and Vella claiming first, second, and third, respectively. (Join the Sup Racing group on Supconnect.)

Some of the other highlights of the race included Candice Appleby losing her paddle, forcing her to stroke away in prone position, until someone eventually tossed her paddle back to her from the Santa Cruz pier. But the paddle recovery didn’t go as smoothly. With the strong winds blowing head-on, once the paddle was cast, it ended up landing away from Appleby, making her go off course to recover the paddle and get back into the jousting match. Now despite of the paddle loss and recovery upset, the Hawaiian expat from California maintained her lead and finished the race in first place, followed by Anne-Marie (Amsterdam, Netherlands) and Gillian Gibree (San Diego, California).