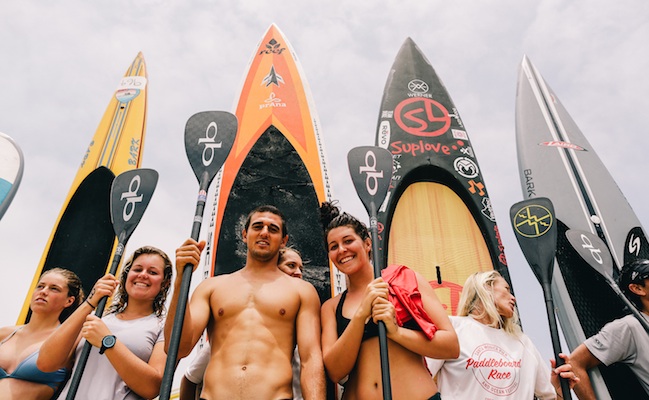 SANTA MONICA, California - Many of paddleboarding’s top racers braved powerful surf Saturday to compete for $20,000 worth of cash and prizes at the 4th Annual Santa Monica Pier Paddleboard Races and Ocean Festival presented by Tommy Bahama. While racers faced waves as big as 10-feet, thousands of spectators screamed and cheered from the pier decks and beach.·

Safety concerns about the unusually high surf resulted in LA County Lifeguards and race safety officials to take the unprecedented decision to cancel several races, including a 2 mile paddleboard event geared towards recreational paddlers. But the pros and advanced racers still competed against each other and Mother Nature in the 5.5 mile long-course and in the Tommy Bahama Team Challenge Relay Cup.

“It was a hard call to cancel the youth events and the fun paddle but the conditions were just to big to run them safely,” said event director Joel Brand. “In four years of holding this event we’ve never had surf that even came close to what we saw today. I’m grateful to our race team and the water safety agencies that the entire event went off without a single serious injury.”

The large, powerful waves narrowed the field in the day’s main race, the Tommy Bahama Team Challenge Relay. Racer Bicho Jimenez of Sayulita, Mexico, a newcomer to the event, capped a series of spectacular wipeouts by relay competitors. Jimenez was on his way back to the beach when an enormous wave overtook him and blasted him off of his board to screams from the crowd. Nevertheless, his relay team prevailed to take home $2,000 in cash, prizes and the Tommy Bahama Team Challenge Relay Cup.

Earlier in the day, the start of the 5.5 mile race left the beach just in time to get hammered by a terrifying series of waves that knocked two dozen experienced paddlers almost all the way back to the beach.

The overall top finisher in the 5.5 mile race was stand-up paddler Slater Trout of Maui with a time of 1:15.08 closely followed by Fernando Stalla of Sayulita, Mexico seven seconds later at 1:15:15 and Brennan Rose only two seconds later. Brandi Baksic of San Clemente won the women’s stand up division with a time of 1:27:25. Cannon Smith, who has only been paddling for 6 months, took the men’s prone trophy with the unbelievable time of 1:15:45.

In addition to the paddleboard races, one of the most exciting events of the day was the two-man lifeguard dory surf race where the teams were required to complete three laps around the course through the heaving surf. Rowing the double-ended, 20-foot long surf boats in and out that many times proved treacherous. Right at the start four boats flipped in large waves and swamped.

“In 14 years of lifeguard dory races this is the biggest and most challenging surf I’ve ever faced,” said second-place finisher John Van Duinwyk, a permanent LA County Lifeguard. “Just to make it out through that was to mean you could win.”

This was the first year that the Santa Monica Pier Paddle was presented by beach lifestyle retailer Tommy Bahama.

“The Santa Monica Pier Paddle is the intersection of everything we love,” said Rob Goldberg, Senior Vice-President of Marketing for Tommy Bahama. “Community, the beach, and passionate athletes who love the ocean. And the level of pure athleticism displayed today in today’s extreme conditions made this event unforgettable.”

Hundreds of other competitors participated in a one-mile ocean swim, a run-swim-run and youth challenges on the beach next to the pier. Thousands of spectators viewed the event, including the live hula troops, bands and a pop-up museum dedicated to surf, lifeguard and paddleboard history.

The Pier Paddle event is a benefit for Santa Monica-based Heal the Bay and its public marine education facility, the Santa Monica Pier Aquarium that is housed underneath the historic Pier Carousel. Heal the Bay will receive a portion of net proceeds from the event.

For more information and additional photos, visit www.pierpaddle.com or www.facebook.com/pierpaddle.