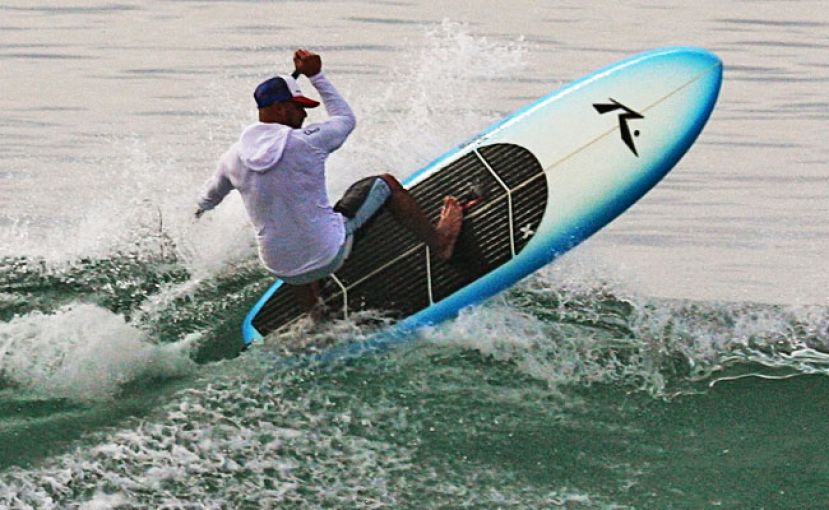 CARLSBAD, California – Winter has come to Southern California, which means mildly cold temperatures and shoulder-high surf. Searching for an empty spot somewhere in North County San Diego, Andre Niemeyer and Jeff Warner landed on a place in Carlsbad, down a cliff in the vicinity of a spot called “Turn Arounds.” The two had to do some borderline climbing to get down the beach and Niemeyer ended up having a few scratches as he maneuvered through the bushes. But the reward was a surfer’s dream, pace the water temp: great surf and no one out.

With plenty of rights and lefts to go around, the two goofy footers traveled up and down the beach, charging both the rights and lefts, occasionally falling off their boards and taking a dive in the chilly waters. Conditions were excellent for stand up paddle surfing. Not too fast nor too slow, the waves (at least for that size surf) had the right combination of power and open faces. Both Niemeyer and Warner, who highly prize style and maneuverability, had a chance to mix turns and noserides, transitioning from rail-to-rail and driving the effortless glide known to the Rusty surfboards. With a population of thirty six million people and a highly active beach community, days like that, with fun surf and no one else out, are hard to come by. But these two certainly scored a session for the books, if not for the surf, surely for the lack of crowds. (See Boardworks Rusty SUP Boards.)

Have you experienced the glide of a Rusty Sup Surfboard?