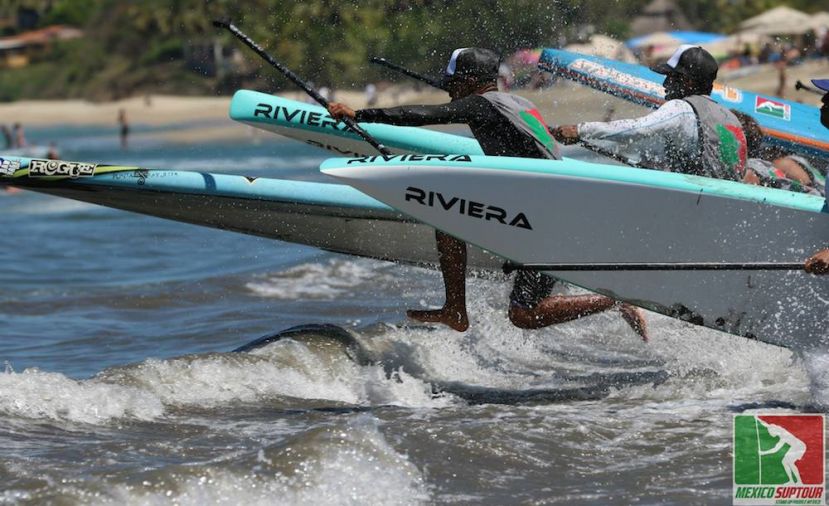 SAYULITA, Mexico - The “Punta Sayulita SUP Classic” stop in the Mexico SUP Tour came to an amazing finish after a solid weekend of competition and fun. The event was a great success in all the amateur, kids, surf, and race categories with good conditions (manageable and favorable winds, good size waves, perfect climate) and a great local turnout to cheer on the athletes and help out with the events organization. Thanks to Punta Sayulita the tournament was able to offer the first $10,000 cash prize pay out to the professional racers competing Saturday and Sunday. Riviera Paddle Surf showed up in full force with the newest race boards, surf boards, and fun boards to supply any and all participants as well as donated new boards and paddles and swag to award the winners.

The event took off on Friday with the Amateur surf heats, competitors competing in either the under 35 division or the over 35 division. All the surfing events where conducted using the gentlemen’s rule and having a first priority buoy out in the waves. The first paddler to reach the buoy had priority. Each heat was judged off of each surfer’s best wave (only 1!).

Heats progressed throughout the day with fun sized waves and a big number of surfers participating, concluding with an exciting final where first place under 35 was taken by local grom Osmar Perez followed by Mario de Leon in 2nd place and Diego Amrquez Nuñes in a close 3rd. In the over 35 division Paco Cavildo took the podium at first place with Horacio “Chachin” Garcia right behind in second and John Cawrse in third. Mid-day events included the kid’s clinic lead by local Pro’s Fernando Stalla, Shelby Rose Taylor, and Javier “Bicho” Jimenez. Kids fled in from surrounding towns and locals from sayulita to learn the basics of SUP and had the opportunity to go 1-on-1 with pros to paddle and have fun catching waves.

Saturday kicked off with the first heats of the women’s SUP surf where the women of Mexico battled it out to find a champion. The final was Canadian Morgan Williamson taking 4th, Marta Diaz from Sayulita taking 3rd place, Karen Jacobson taking 2nd, and Local Yohana De la Rosa taking a surprising but well-earned 1st place and winning a new Riviera 8’0” nugget.

The first Pro SUP race launched at 1:30pm where all paddlers raced a 5km technical course in and out of the waves, completing multiple buoy turns and completing 4 laps before crossing the finish line. Riviera Paddlesurf Pro Ryan Helm of Florida/Sayulita maintained the lead the whole race taking 1st place and $1,500 with local Rogue SUP Pro Javier “Bicho” Jimenez tailing close behind taking 2nd place and $1,000. Third place was a battle flipping between Fernando Stalla and local boy Felipe “Pipe” Rodriguez Lorenzo, but Stalla walked away with 3rd place and the $500 prize. In the women’s category, Kentucky girl and Riviera Paddlesurf Pro Shelby Rose Taylor took a lead on the first lap and maintained the lead to win 1st place and $1,000. Floridian race Kim Barnes followed in second place winning $600. Third place was between Punta de Mita paddler Alejandra Brito and Karen Jacobson, but Jacobson rode in first taking the $400 prize.

After Saturdays race’s conclusion started the Men’s Pro SUP Surf event. The men’s Pro Surf would crown two champions in Sunday’s final, one for the Best Wave award and one for the best Radical Maneuver. The heats were packed with talent showing Sayulita’s crowd what SUP can be. Local boys Felipe “Pipe” Lorenzo and Felipe Hernandez showed early power in air maneuver and Ryan Helm, Fernando Stalla, and Riviera’s Brandon Rambo shined making it into Sundays final.

Shortly after, the Pro 10km Distance race started and turned out to be one of the most exciting events of the weekend. The course consisted of 3 big triangles; one shot straight into the wind, a turn and return with downwind and into the waves, a cross wind and repeat x2. Javier “Bicho” Jimenez pulled forward in the first lap to take the lead over local Felipe “Pipe” Lorenzo, and continued to keep this lead throughout the race.

Ryan Helm was close behind in 3rd but ended up taking “Pipe” over in the last lap. On the last wave in on the 3rd lap, “Bicho” Jimenez fell and almost let Ryan pass him up, but he recovered and on a small bump he rode in 1st place taking home another $1,500. Ryan took second place and $1,000 more, and “Pipe” Lorenzo finishing third with a $500 prize.

The women’s race was just as exciting. Shelby Rose Taylor took a strong lead on the first lap, coming in hot with the downwind of the first lap, but on a rogue wave she fell and lost her board all the way to shore. Kim Barnes took over with almost ½ buoy lead while Shelby was swimming after her board. In the following 2 laps, we saw Shelby dig deep and make up little by little the lead Kim had taken, and on the last downwind stretch of the last lap, Shelby managed to pass Kim and finish 1st place again and another $1,000. Kim ran in 2nd winning $600 and Alejandra Brito in 3rd place with $400.

The award ceremony opened up with a great Mariachi Band, drawing a large crowd into see all the winners take home their prizes. California’s Mike Downey was the weekends Announcer and Judge and he continued to please the crowds announcing local and international athletes as they took the podium. At the end of the ceremony all were invited to the after party at the roof top beach front bar Estella where everyone celebrated the success of the event and got to say goodbyes. 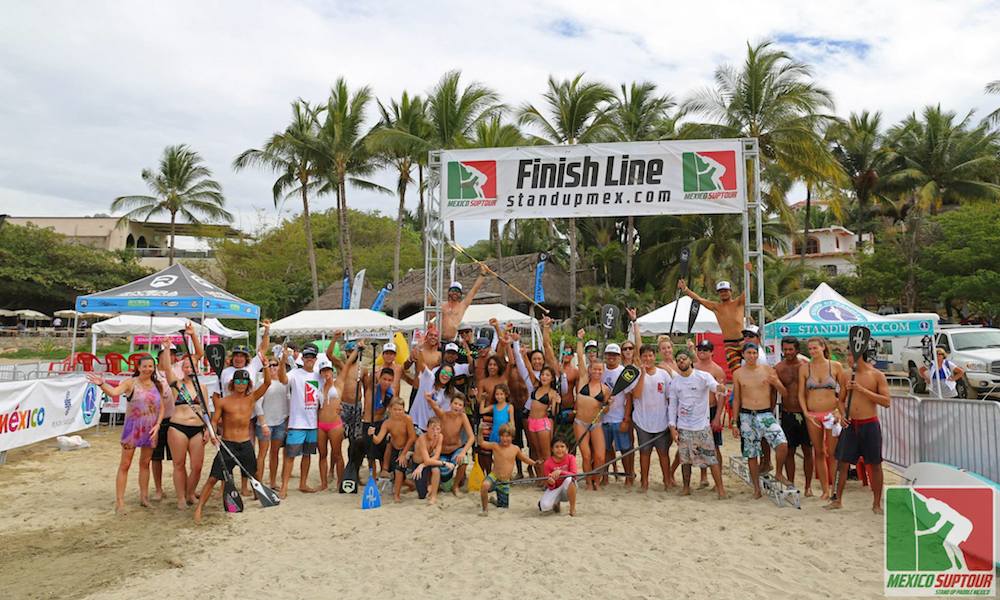 Mexico SUP Tour’s “Punta Sayulita Classic” turned out to be a great weekend event. Thanks to Punta Sayulita for the support and the first ever cash purse, to Riviera Paddle Surf for the event sponsorship, boards for the race and amazing prizes, and all the local sponsors who provided the support that made the event so great, and all the local volunteers who ran the event so smoothly. A special thanks needs to be given to Leyla Morris, Octavio Moctezuma and the whole Stand Up Paddle Mexico shop staff that worked their tails off over time in order to make sure everything at the event was perfect. Their due-diligence and hard work was seen in every aspect from promoting the event, organizing every category and competition, even participating in the weekend’s events between work, and most noted in how every part of the event was covered and taken care of. Also a special thanks to Hotel Kupuri for putting up all the out of town athletes in one of the nicest central beach hotels in Sayulita. The next stop in the tour will be in La Paz, Mexico the 18-19th of April. We invite all people interested in SUP and racers looking to compete to come be a part of 2015 tour stops.

Thanks to our Sponsors:

More in this category: « Surftech Demo at Surf ‘N Sea’s 50th Anniversary Party Air France Paddle Festival to Kick Off With A Bang »