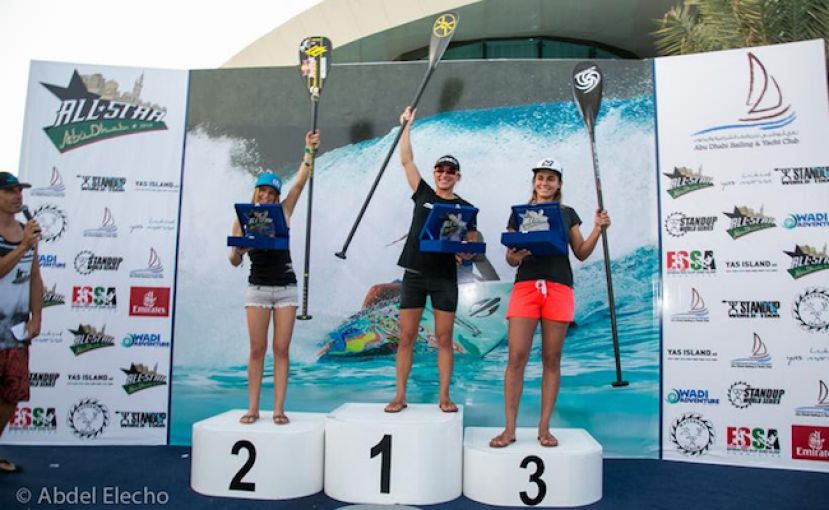 Lina Augaitis from Canada arrived in the UAE for her first showing on the Stand Up World Series and won. Photo by: Abdel Elecho

ABU DHABI, United Arab Emirates - Lina Augaitis from Canada arrived in the UAE for her first showing on the Stand Up World Series as an acclaimed paddler, but a new face to the Series. On day one, she came out of the gate firing all cylinders to take a comfortable win in the long distance. Meanwhile on day 2, Lina maintained her composure and powered her way through the rounds to reach the Final heat of the day.

Lina was up against current ratings leader Angie Jackson (Fanatic), France's Olivia Piana (Fanatic) and Slovenia's Manca Notar (Naish) amongst other high profile athletes.  It was a tough battle, as the 6 finalists lined up for one last showdown. After a tight race, Lina finished in an impressive 2nd place behind Angie Jackson (Fanatic) in the sprint racing, giving her the much deserved overall win for Stop #2 on the 2014 Stand up World Series. It is clear that Lina will be a name to watch out for as we head through the season and make history on the Stand Up World Series.

On the men's side, the World Series Sprint Racing provided some of the most dramatic, competitive Stand Up Paddle Racing yet on the Stand Up World Series, as the World's best battled it out at the all new Yas Marina SUP Circuit for the final component of the Abu Dhabi All Stars Grand Slam.

Coming into Day 2, Connor Baxter (Starboard) was sitting on top of the world, having convincingly won the first stop of the Stand Up World Series in Brazil, and then the Opening day of stop number 2 in Abu Dhabi. Meanwhile, coming off of a disappointing result in Brazil, Kai Lenny (Naish) battled Connor to the bitter end on the 1st day of the Abu Dhabi All Stars, having to settle for 2nd.  However, on the second day of action Lenny looked calm, collected and ready for business.

As the rounds progressed in the unique World Series Sprint Racing format, Kai Lenny (Naish) was dominating each of his heats to make it all the way to the final heat which included arch rival Connor Baxter (Starboard). Both athletes advanced, as did 4 more of the World's best: Zane Schweitzer (Starboard), Mo Freitas (Focus SUP), Beau O'Brien (Starboard) and Jake Jensen (Fanatic).

It was a battle for the ages, as Kai Lenny managed to take the lead on the first leg and maintained it through the remainder of the course.  Another battle continued behind him for 2 through 6, giving him the well deserved win in the Sprints.  Zane Schweitzer (Starboard) finished in 2nd and Connor Baxter (Starboard) in 3rd, which meant that Kai won not only the Sprint Racing, but the overall World Series event title at the Abu Dhabi All Stars Grand Slam.

Congratulations to all the female and male athletes. There are highlights, recaps, galleries and news from this final day, as well as for the event as a whole at www.watermanleague.com