Awards
updated 8:00 AM PST, Jan 16, 2022
Headlines:
The Benefit Of Training Indoors: Between wind, weather, chop, swell, no b
Tips For SUP Fishing Rookies: So you’ve just purchased your new SUP fi
Winter SUPing: How To Stay Warm In Frigi: As winter settles rubber thickens and se
10 Places to Visit in 2022: If you're lucky enough to get a vacation
Hanohano Ocean Challenge to Kick Off 202: Hanohano Outrigger Canoe Club brings you
Weekly Recap 1/11/2022: Welcome to the Supconnect Weekly Recap,
Top 5 Beginner Mistakes to Avoid: We all make mistakes, especially as a be
Reasons To Take Your Phone Paddle Boardi: We paddle for lots of reasons, we keep f
6 Essential SUP Safety Items That You Sh: SUP safety is an important topic that un
What Is River Surfing?: What is river surfing? If you find yours 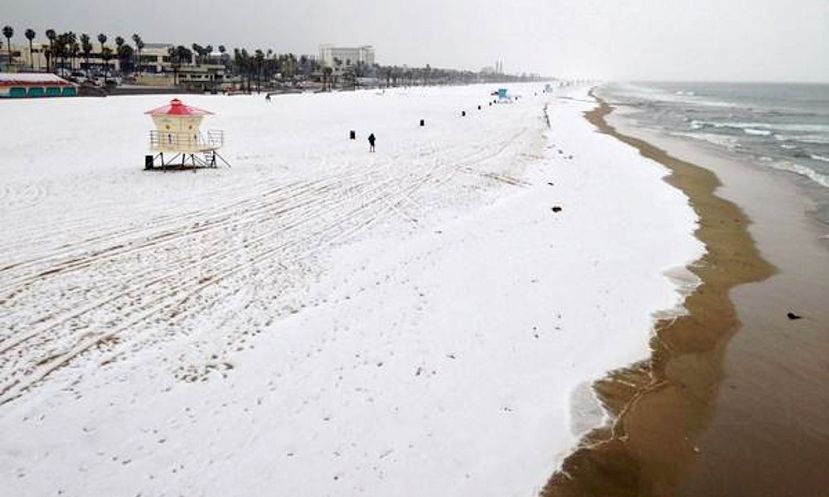 A hail storm hit Huntington Beach leaving it looking like a Winter Wonderland.

HUNTINGTON BEACH, California - As a storm hit Southern California over the weekend and through today, there was some much needed rainfall and snowfall to hit the state. Oddly enough, Huntington Beach was one of the places to get hit with a wintery breeze and it hailed so much so that the city and beaches looked as if it had received a light snowfall. Local paddle boarders and surfers have gone bananas after seeing and hearing the news. Pirate Coast Paddle posted a photo on Instagram about the event, as did local pro surfer Brett Simpson.

The U.S. Los Angeles National Weather Service reported about a half inch of hail to fall and cover the city in pea-sized balls of ice. Surrounding cities such as Long Beach also experienced the hail storm as shown in the video below.

Some of the photos to have surfaced show Huntington Beach covered in what looks like a blanket of snow. See the photos below. Also, see more photos from KTLA here.

Were you in the area and able to witness this awesome event? Share your photos with us and let us know your experience!