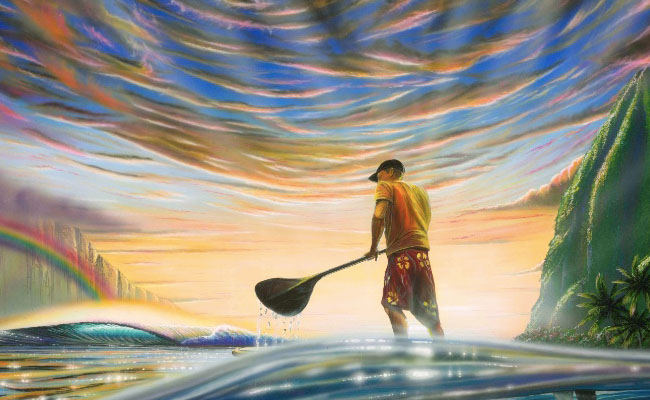 OAHU, Hawaii – Combining a playful imagination with an appreciation for the strength and beauty of nature in harmony with humans, artist and waterman Hilton Alves embarked on the creation of a series of SUP paintings as the official artist for this year’s Stand Up World Tour. The self-taught artist began painting in 2000 in Brazil and has since gained traction in the surf art world painting ocean and ocean lifestyle inspired art on canvas and murals. Being the official artist for the tour is an honor for Hilton and he says, “seeing my art on posters, event banners and t-shirts is exciting and surreal for me and I’m thankful that people are appreciating my art.” (Visit Alvez' Website.)

After moving to Hawai’i in 2007, Hilton committed to reaching his dreams as an artist and waterman. In the past 3 years, Hilton has succeeded in competing and placing in numerous SUP events such as the Battle of the Paddle and participating in events such as the famed Haleiwa Arts Festival and painting 10 Hawai’i murals as part of his social project called Surf Art Kids. Hilton began painting SUP art in 2006 and introduced his first Waterman Collection at the 2009 Haleiwa Arts Festival. Since then, SUP art as a sub genre of surf art has grown in popularity and Hilton has enjoyed working with two of his biggest passions. Hilton says that, “inspiration is found in everything I do whether it be surfing, stand up paddling, body boarding, diving, swimming, running on the beach or just relaxing near the water. I see color, beauty and art in everything around me.”

The 2011 World Tour Collection began with a painting for the Sunset Pro competition depicting world-class SUP surfer Kala Alexander dropping into the biggest wave of the 2010 season at Sunset. Representing Art in Surf as an athlete and artist, Hilton also competed in the trials at Sunset facing the challenge of SUP in 15-foot waves and competition with the world’s finest watermen. Hilton will go on to paint the art for events being held in Tahiti, Chile, Brazil, California, Australia and the Big Island of Hawai’i this year. This series will focus on accentuating the vibrant colors and unique surf breaks of each tour location, while adding a bit of whimsy that Hilton’s paintings have become known for. (Become friends with Hilton Alvez.)