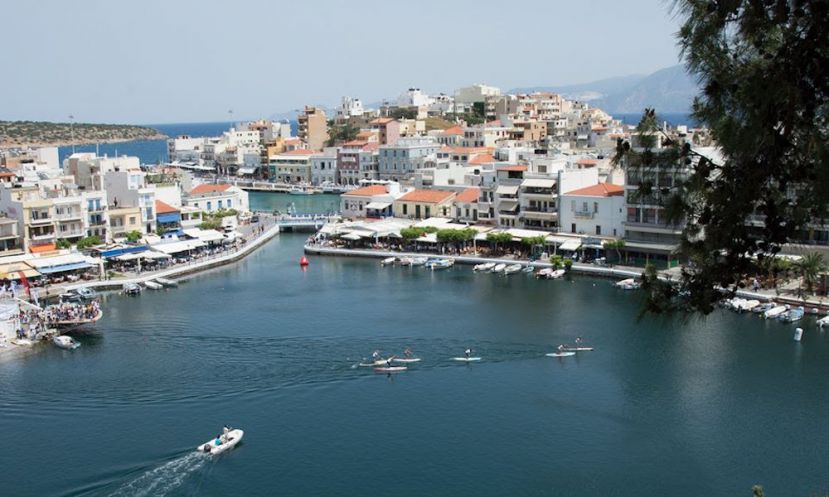 The event had a charity cause with all registration fees going towards two local charities “Filoi Pedopolis Neapolis” and the “Social Grocery Store of Agios Nikolaos” for helping children and families in need. The amount gathered reached a total of 2,400 euros! 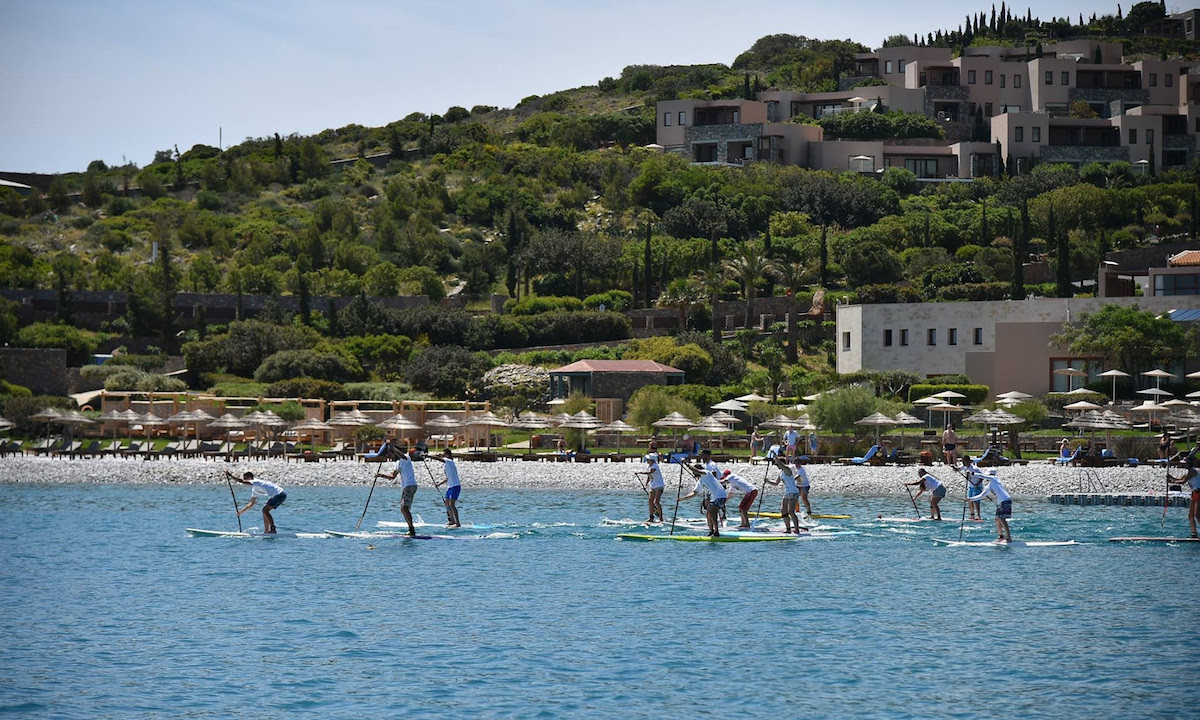 Day 1 started at Schisma Beach Elounda with the usual Skippers Meeting, introductions and acquaintances. The racing started with HSSA Fun Boards 3,6 KMS with over 20 men and women taking place with the athletes passing the finish line after approximately 30 minutes. The top 3 were Spiros Davrados, Elias Dermatas and Nikiforos Tziotis for the men and Marinella El Kai, Stamatina Chelmis and Calliope Papadimos for the women.

After that, the HSSA 12’6 Technical Race 3 KMS took place for both men and women in wonderful windless and flat water conditions. Manos Neratzoulis finished 1st gaining great distance from the others, the Italian Elia Rossetti taking 2nd place and Giannis Chatzioannou the 3rd for the men. Elli Firgadi easily won 1st place, followed by Athanasia Karaindrou after a strong battle with the 13 year old (!) Fragkiski Moschakis who finished 3rd.

Iliana Lakafosi in the women’s division finished in a very good time.

After completing the technical 3km races the HSSA Elite 14′ technical race 3 KMS took place as scheduled with foreign athletes showing their experience and skill. Giordano Bruno Capparella from Italy finished 1st, Joep Van Bakel from Netherlands took 2nd place and Normen Weber from Germany in 3rd place, only tenths of seconds away from the 4th George Fragos, finishing strong. Great competition took place in the buoy turns with Normen Weber making his attack runs in the 2kms of the race. Nikolaos Sirigos finished 5th followed by Cristofer Bullant from Cyprus, Alex Prapas and Dimitris Apalagakis from Greece. Maria Panagis from Cyprus, the only participant in the women’s category, finished in a very good time. 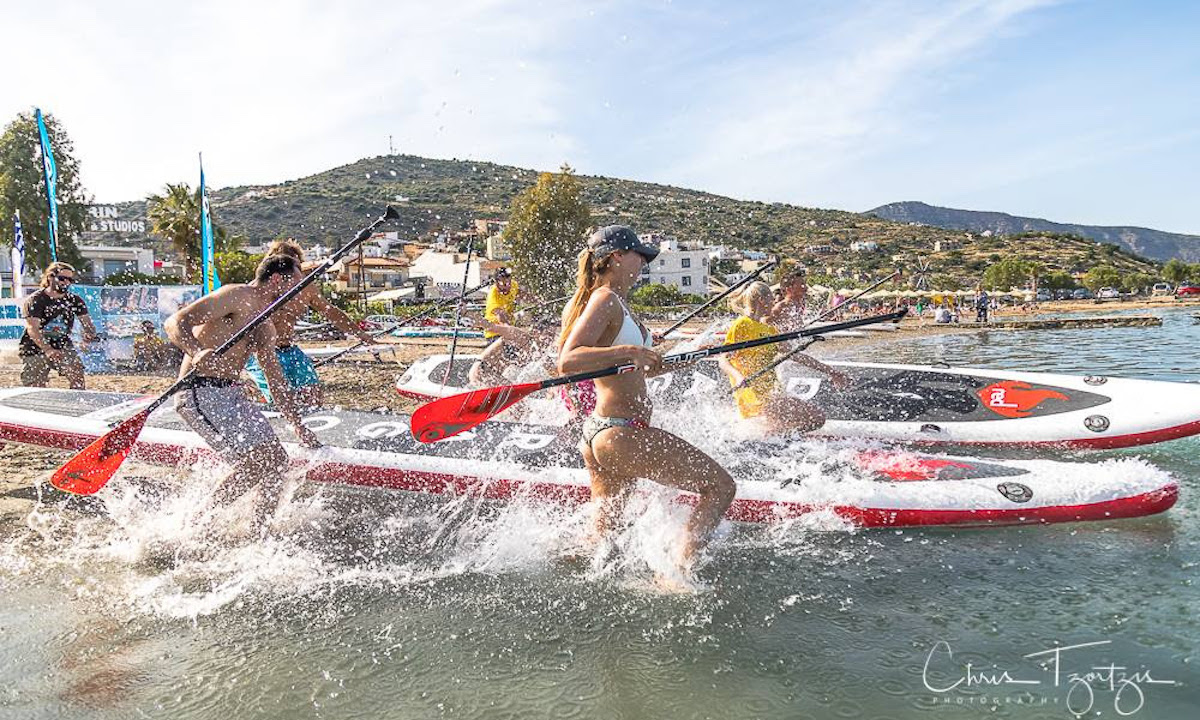 Finally, in the afternoon, the impressive Red Paddle Co Dragon Race followed with the local team from Chania, Crete -Chania Surf Club- taking the win! During Day 1 children and younglings had the chance to learn the sport, testing their skills and taking instructions from SUP athletes.

Day 2 of Agios Nikolaos On SUP 2017 - HSSA commenced with a Skippers Meeting in Agios Panteleimonas Beach. The first race for day 2, the big one, the EuroTour 2017 Elite Long Distance Race 15 KMS. The morning weather seemed ideal, with strong downwind southern winds of 20-25 knots. The start found the competitors paddling fast and strong side by side with the 8 safety & rescue vessels, with the downwind pushing forward down the track. All the athletes reached the Agion Panton Island in a much enjoyed downwind run that then turned into a strong sidewind making the last 5kms a real struggle. In the last dramatic meters before the finishing point at Agios Nikolaos Lake, the upwind of over 25 knots blew strong, testing the strength and patience of the paddlers. There were 7 DNFs in the race, all happening just after the 13th km. One of which was Ludovic Teulade who was running for 2nd place until the 13th kmt but unfortunately his paddle abandoned him, breaking in half, leaving him out of the race!

Cristofer Bullant with his results managed to win 6th place in the overall ranking for Elite 14’! The 24-year-old Cyprian did a really nice job and could have achieved better if he only had a more suitable board. Same for his fellow 17-yea-old Cyprian, Zacharias Koumoudiou losing distance from first from the start. Special mention should go to 14-year-old Alexandros Vasileiou who managed to surpass stronger competitors and finish such a difficult race.

From the Agios Nikolaos On SUP 2017 - HSSA races, the Greek National Team for the ISA Championship in Denmark (1-10 September 2017) was selected. The overall rankings picked George Fragos, Nikolaos Sirigos and Alex Prapas for representing Greece with H.S.S.A.’s financial aid! 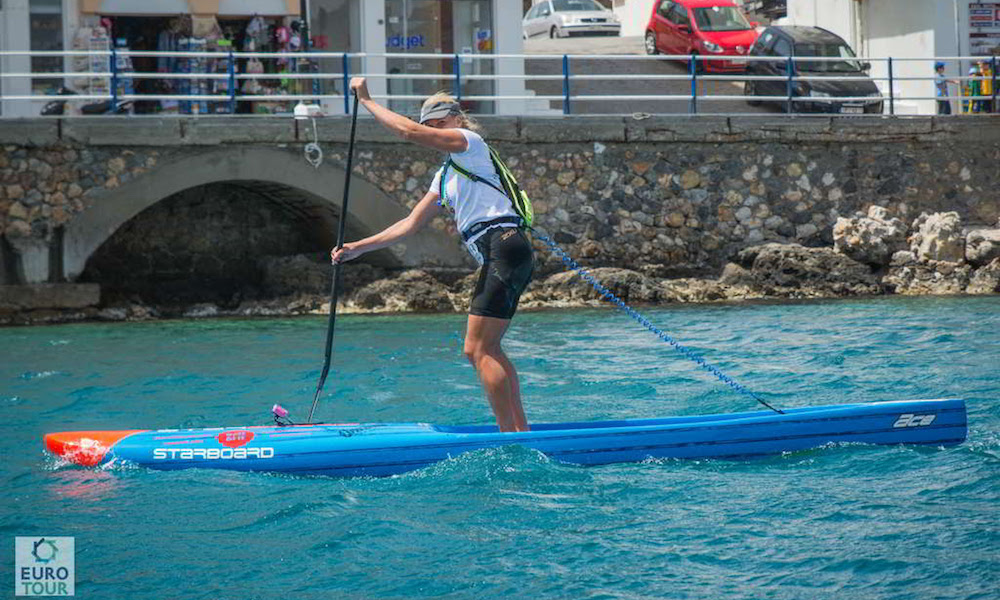 Penelope Strickland from New Zealand in the women’s category, as a world champion, had an easy win with very good performance leading from start to finish. In 2nd place, Susak Molinero from Spain was followed by the German Susanne Lier and the Italian Caterina Stenta. In the 5th and last position Iliana Lakafosi from Greece who managed to struggle through the difficult conditions to finish the race, whereas Maria Panagis from Cyprus did not get to finish the tough race.

In the meantime, the amateur races of HSSA 12’6” και 14’ Race 8-9KMS that started just after the EuroTour Elite LD were taking place starting in a different point at Agios Panteleimonas beach as well. With the downwind pushing forward for the biggest part of the track the athletes in 14’ M40+ category finished with great performances and times. The first positions were covered by Petros Frontistis, Giannis Topsahalidis Alexandros Delatolas, with just a few seconds apart, a sign of the competitive race.

In the mens 14’ category, Konstantinos Andrikopoulos came 1st followed by Giorgos Tzannis and Nikolaos Nomikos. In the mens 12’6” category, Manos Neratzoulis won 1st position leaving behind the Italian Elia Rossetti in 2nd place and Giannis Chatzioannou in 3rd in an impressive race. In the womens 12’6” category, Elli Firgadi finished in first ahead of Athanasia Karaindrou in a really strong race.

After the big races finished under the bridge of the Lake of Agios Nikolaos, it was time for HSSA fun boards 3km in the lake, where else, but in the magnificent lake Voulisma. Spiros Davrados won the race, followed closely by Elias Dermatas in 2nd and Konstantinos Antonakakis in 3rd.

In the women’s category Marinella El Kai pushed forward and finished first place with a nice performance followed by Stamatina Chelmi and Calliope Papadimos. Special mention should go to the younglings’ Junior race 1KM (U16 JUNIOR) with young participants showing some great skill, like Ioannis Kiriakidis from the boys and Mirsini Fioretzi from the girls, who won 1st place.

The awards ceremony for every category was held in front of the Lake of Agios Nikolaos. The afternoon was warm and sunny just like the crowd and athletes! There were smiles and congratulations all around, with the competitive part staying in the waves and the race tracks. The modern dance team spiced up the air with nice sounds and visuals for a perfect relaxing ending to the great races. 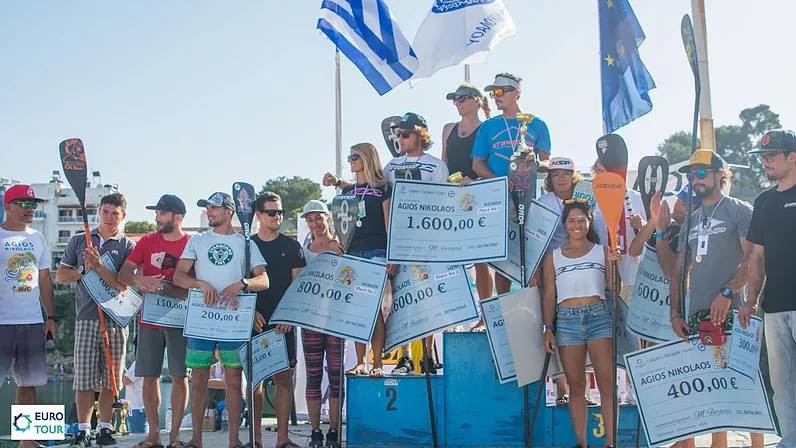 In the evening, it was time to show some Cretan hospitality. The famous restaurant Blue Katsarolakia was the meeting point for a night full of good traditional Cretan food, music, dancing, a little bit of raki and lots of smiles. In an evening everyone said will remain memorable for many years to come.

In the morning of 1st of May the international athletes were gathered in the Marina beach of Agios Nikolaos for a SUP clinic. Leonard Nika, Paolo Marconi, Penelope Strickland, Susak Molinero & Susanne Lier were there on spot for those who wanted to expand their knowledge in the sport. The champions shared valuable hints, based on their experience and skills, in and out of the water. The final farewells were through the heart and everyone renewed their meeting, for a participation again in next year’s event! Check out the video recap below.