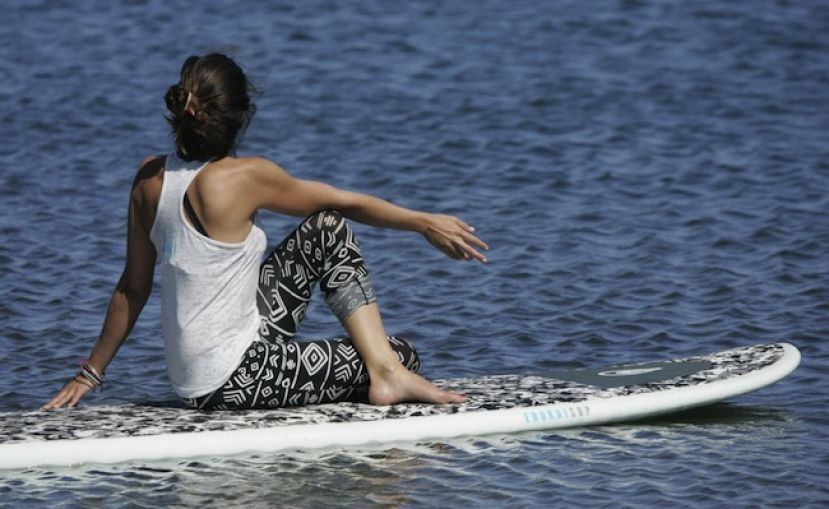 SALT LAKE CITY, Utah - Taylor Chaput had a problem.  As the owner of Paddle Board Bliss, a company whose name as become synonymous with SUP Yoga,  Chaput was finding that all of the yoga-specific boards she evaluated were inadequate for the intricate poses that her burgeoning army of "Bliss Babes" were attempting.  She brought her dilemma to Ken Driscoll, the master designer and shaper, as well as a co-owner of Glide SUP.  It should be noted that Ken is a man with few interests outside of developing SUP shapes that have revolutionized the insular world of SUP. 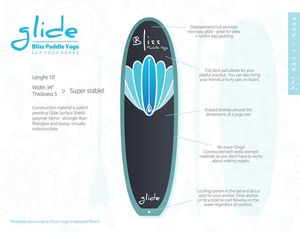 Chaput challenged Driscoll to design a board that had a flat area, the size of a yoga mat but could still maneuver easily through the breakers that Taylor's clients had to navigate before they reached their relatively calm yoga spot.  The board also needed to be able to accommodate an anchor or be able to tie up to other boards.  Up until this point, Bliss classes were taught in a kelp bed in what was an ingenious effort to anchor their boards by lashing the kelp across the top.  Chaput's conundrum was that her business was growing so quickly that many of her new spots had no kelp beds nearby.

"Oh", Chaput added after downloading her unique demands to the always accommodating Driscoll, "it also can't be too heavy as most of my clients are women."  Driscoll, looking like someone had just tortured one of his favorite cats, went to work in a style that can only be described as "Driscollian".  After buying a few beginner Yoga DVD's, Driscoll got in touch with his inner Yogi.  "I realized that the stability of the board was my primary challenge but I wanted to make sure that I didn't compromise the smooth paddling characteristics that our boards are well known for" said Driscoll.

A few proto-type boards and few disastrous "Down Dogs" that resulted in dunks in the icy waters of local Utah lakes later, the "Bliss Board" went into production in Glide's factory in Salt Lake City.  In addition to rediscovering a limberness Driscoll hadn't known since his days as a professional white-water kayaker, he had also created a board that is redefining Yoga on the water.  "This is far and away the most awesome board that we have ever used" stated Chaput.  "My students are now advancing quicker than I had ever imagined."

The dimensions of this magnificent board are 10' x 34" x 5" and the deck is exactly the size of a common yoga mat.  The unique displacement style bow makes the board a fast paddler that also tracks well.  Driscoll also added a "kick rocker" in the nose so that it easily paddles through waves or chop.  There is also a hole in the tail so that multiple boards can be tied in a daisy chain and then anchored.  The boards are also coated with Glides patent pending coating "GSS" which makes them virtually indestructible.   Unbelievably the boards weigh a mere 26 lbs.

"Who would have thought that a company that redefined SUP for whitewater could have done the same for SUP Yoga?" Driscoll not so humbly asked.  "I made a promise to the rest of the guys in the factory that I would never show up to work in Yoga pants again."