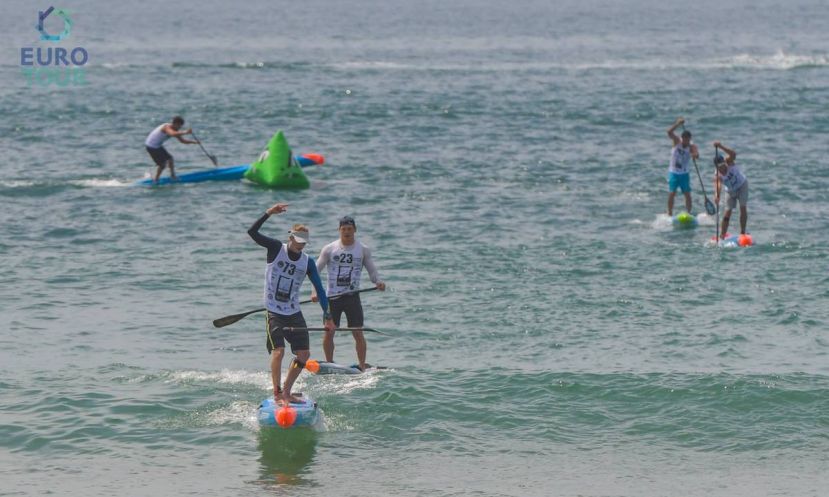 Connor Baxter heading in for the win during the sprints. | Photo: Euro Tour

HOSSEGOR, France - The 2017 Hossegor Paddle Games was a great event in a sick town here in France for my second stop on the Euro Tour. The first day kicked off with a long distance race that started in the ocean but then finished in a flat water river. The hardest part about this race was my board choice, whether to take my Starboard All-Star for going in and out of the surf and ocean or taking the Starboard Sprint for that final leg in the flat water.

At the last minute I decided to take my chances out in the ocean with the flat water Sprint so that I had a fast and easy board for the finish - which I knew was going to be a sprint up the beach. We all lined up ready to go, and as always, I wanted to have a perfect start to get out of the mess with all the other paddlers. I was able to turn the first buoy in the top five - then I got up in the front to make sure no one could pull away. 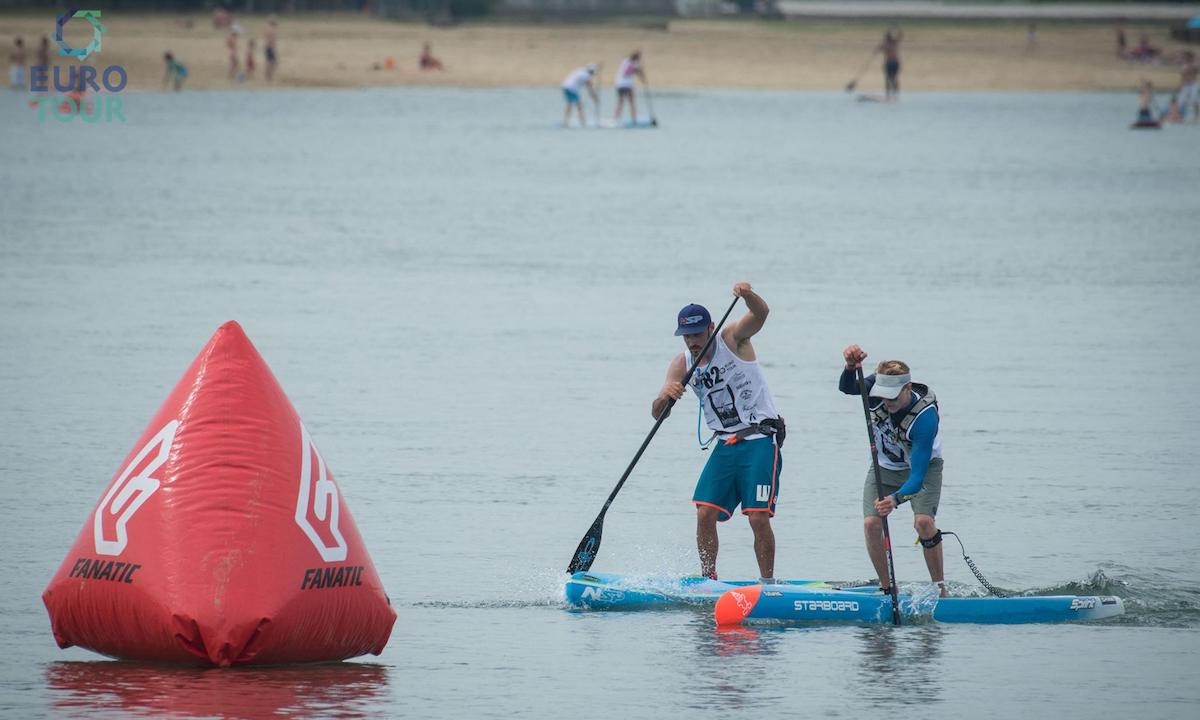 There were some small bumps, but not enough for me to pull away from everyone. I paced myself knowing that it was going to be a long race and I needed to have another gear for the end. Once we rounded the upwind buoy Michael [Booth], Titouan [Puyo] and I started to pull away and have a gap on the rest of the group. We made a quick left turn to head into the mouth of the river and Titouan caught a few bumps to make a decent lead on me and at the same time I was able to put a small gap on Michael.

Heading up the river there were a few sections that were a bit swirly and one of those sections caught me off guard and took me out. I got swept backwards and Titouan now had and even bigger gap. Once the river opened up and got super flat - that's when Michael was able to catch up to me. We both looked at each other and knew what we had to do, so we started to pull hard for short bursts and slowly we closed the gap between Titouan and us.

We had a breather, but quickly noticed two guys behind us closing the gap so we all three paddled next to each other and kept up a good pace. We turned the last buoy at the end of the river and started to head back to the finish line. Somehow Bruno [Hasulyo] closed the gap on us halfway back and then it was five of us sprinting to the finish line. I lined myself up so I had the best line and positioning for the final sprint to the beach and across the finish line. I made the first move and started sprinting pretty far out, but I knew I could hold these guys off. I felt like throwing up and my body was hurting, but I kept telling myself ‘Never Give Up’. So, I didn't let off the throttle and kept it in full blast all the way up the beach in first place.

I was super stoked to come out on top for the distance race knowing that the surf race was the next day and I love the technical races in the waves. I went out for a big meal so that I could refuel my body and then went straight to bed so I was rested up for the next day. 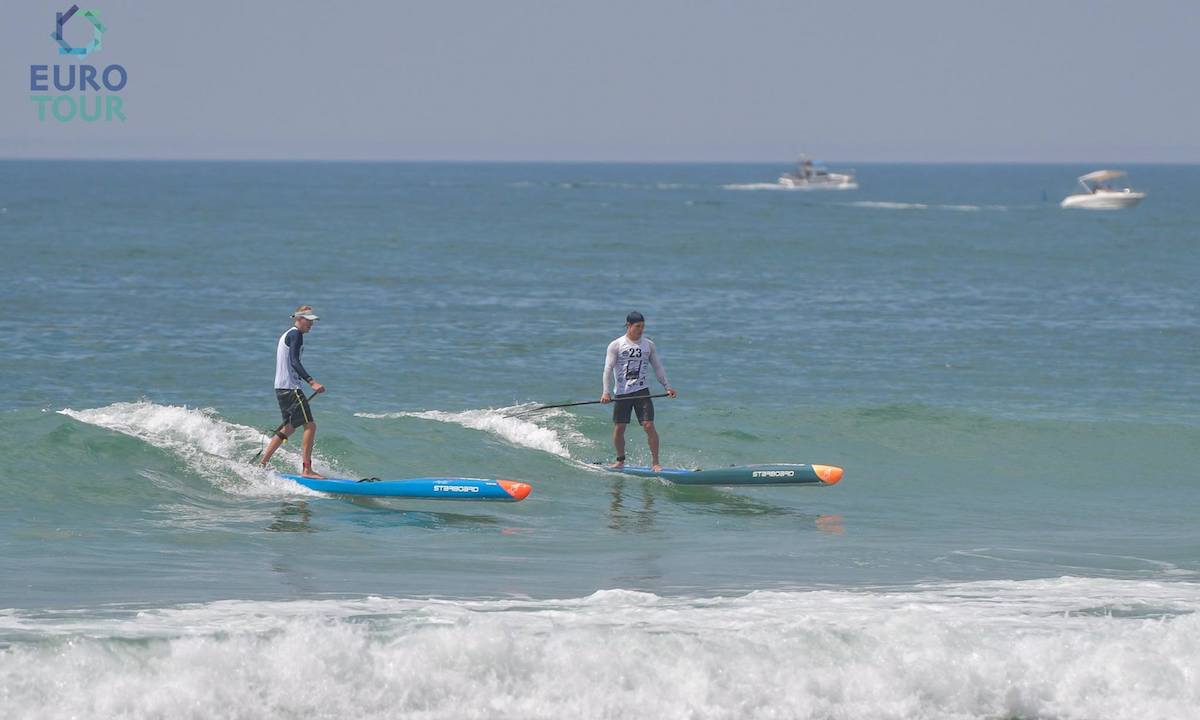 The next day started off with a bit of fog and we barely could even see the water from the beach. We had to wait for the fog to burn off and for the tide to be right so we didn't start the race until 3:30 in the afternoon. It was a 2.5 lap course that went in and out through the surf. I got a perfect spot on the starting line and took some deep breaths before the horn blew.

As soon as the horn went off I sprinted down the beach and hopped on my board. I sprinted super hard to get through the surf quickly and to get into clean water so I didn't get piled up at the first buoy turn. I got to the first turn in fifth place but made sure to stay close to the top guys so when we started to head in with the waves I would catch the same ride as them. We turned the next buoy and I started to catch little bumps to pull up in the front. There was a super small wave that Michael, Titouan and I were able to scratch onto. We had plenty of room to turn the inside buoy and power back out through the surf. It wasn't until the end of our first lap back into the beach through the surf where Michael and I just barely got into a wave in front of Titouan. This put us in first and second early on and then we just worked together to maintain our lead. I knew I would win the overall if I just played it safe and stayed with Michael.

We did our second lap with a good hard pace and were in rhythm with the waves. Going into the last half lap we started paddling a little harder to make sure it was a sprint up the beach. Before the second to last buoy turn on the inside I snuck out on a little swell that gave me a small lead. I took advantage of that lead and kept the hammer down to the last turn. I swung my board around and instantly started to hunt the waves down. Michael was right behind me and just barely missed a wave that I was able to jump on for my double bullet and the overall win! I ran up the beach super stoked, but of course still keeping in mind the overall for the whole Euro Tour is still up for grabs.