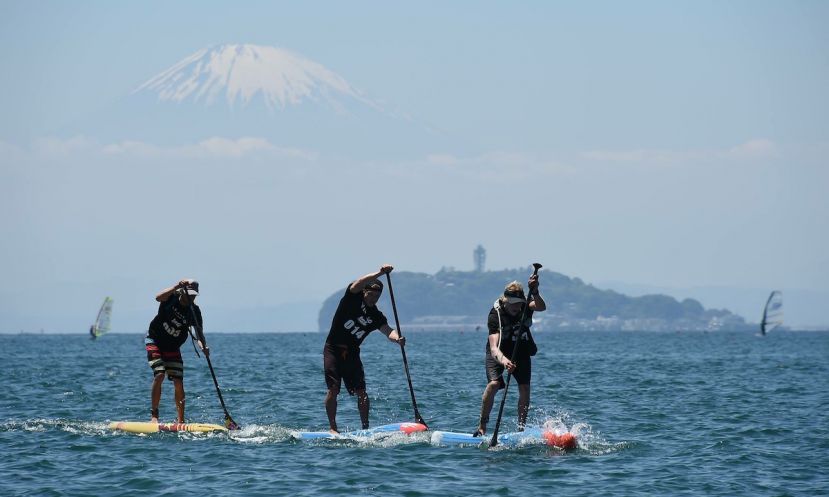 HAYAMA, Japan - The 2016 Victoria Cup in Japan was a great event with one of the most stacked fields ever in the Stand Up World Series. The top 20 were chomping at the bit and hungrier then ever. The event kicked off on Friday with the long distance race - which I just barely made arriving the night before at 10:30pm. Going into the distance race I had no expectations, which played in my advantage. The race started at 11:30am, which allowed me to sleep in and get a good breakfast to fuel me up. The distance race course was the biggest change in the event involving the Super Lap! Meaning I had to do four laps but on one of those laps you can turn a buoy early to get a lead and put you in front. This added a whole new game plan, tactics and mental breakdown of the course.

It was a 10k race with 21 buoy turns, which made it super interesting and fun to watch. When it got closer to the start I lined up with a straight shot to the first buoy turn. I knew it was going to be a hard race and I definitely tried to conserve energy so I could sprint to the beach. I lined up with some of the best paddlers in the world and the energy was high. When the horn blew I sprinted as hard at possible to make sure I had clean water. After 1000 meters we all pulled into the train and headed out to the first buoy turn. I made the turn in fourth place and tried to maintain this position to the next turn.

On the first lap there were only a few guys who decided to take the Super lap and pulled in front of all of us by quite a bit. Seeing three guys way out in front was definitely hard but made me work harder to catch up to them. The next lap a few more guys went on the super lap and I noticed they caught up to the front guys. Seeing this gave me some confidence that when I turned for the Super Lap buoy I would catch up or even be in front. Coming into the third lap I knew it was time to put the hammer down and take the Super Lap. 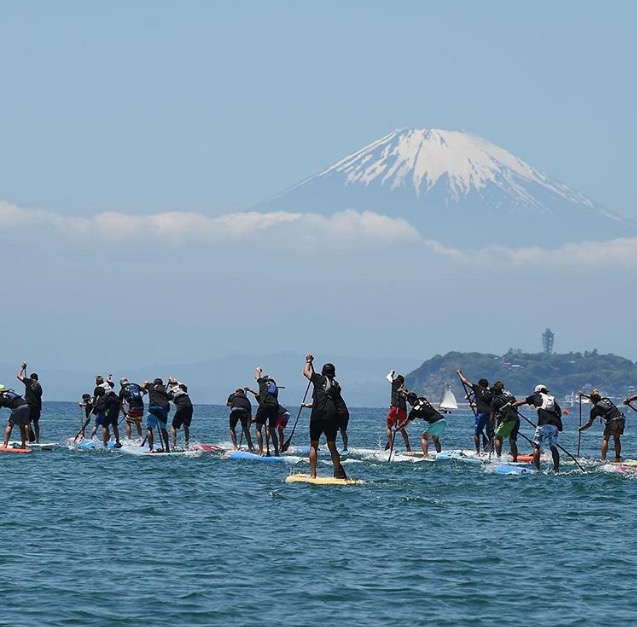 Michael Booth, Casper Steinfath and I had a small gap between the hungry train behind us and we took our shot and pulled out in front of the lead group. Now, being in the top three I knew I had to keep enough gas in the tank to be able to have one last sprint. I had a good pace going into the last lap and then the gear was shifted and we all were trying to pull away to take the win. I made the last outside buoy turn in first and there was a little wind so I took advantage of the little bumps - but Michael had the same idea and made it impossible to pull away. I just kept my head down and knew if I could hit the sand a second earlier I could win it. When I was 500 meters off the beach I went into beast mode and created a small gap and was able to run up in first place. I was super stoked to take the win over such a strong field of paddlers - especially considering I flew in the night before. That night we had a big Starboard athlete dinner with good food and talked strategy for the next day in the sprints.

As always, we had the heat format with a stacked heat from the get go. Every heat was difficult and I had to be on my A-game to make sure I passed through each round. The first heat I had to work but I paddled just as hard as I needed to - so I could advance to the next round. In round three it got even more stacked and there was no room for error otherwise someone was there to pick up your spot. I had the same plan to paddle just as hard as needed to so I had plenty of gas for the finals. I was able to secure my spot into the quarters and started planning for the next heat. All the quarter final heats looked like a final back in the day and it was all or nothing to make sure I had a spot on the line for the semifinals. I had a good start that got me in a comfortable spot through the whole course and earned the semifinals ticket. After a short break and lots of water it was go time for the second to last heat. The semifinals went smoothly, but definitely had to work for it and break a sweat.

Once I had that spot I was just focusing on what had to be done and of course that was trying to get two bullet wins. In the finals there were Kai Lenny, Casper Steinfath, Jake Jensen, Mo Freitas, James, Arthur Arutkin and Zane Schweitzer. Everyone worked their butts off to make it into the finals and now it was game time. I lined up with all the boys and was ready for a great sprint.

When the horn blew I sprinted into the water and had a decent start but half way out to the first buoy I missed one stroke and got stuck in the messy water. I kept my head on it and was trying to get out of fifth place so I could at least win the overall. Coming into the second buoy turn I tried go on the inside of Jake and ended up getting stuck on the buoy and the was pretty much it for me. I was in fifth and couldn't catch back up to the front guys. I was definitely bummed - but seeing Casper win the sprints and taking his first overall win on the World Series was better then winning.

With my combined Long Distance and Sprints finishes - I ended up with 2nd Overall in the Event - and was super stoked. Our sport has come so far and to see the level in this year’s World Series was super crazy. Training has been good but now it's time to go back to the drawing board and train even harder for the next one. I want to thank my sponsors for all their support – Starboard, Dakine, Maui Jim Sunglasses, Futures Fins, Hammer Nutrition, GoPro, Garmin, Waterman’s Sunscreen, OnIt Pro and Hi-Tech Sports. Also a big Mahalo to all the event organizers and all the volunteers. Great Event!!

More in this category: « Weekly Recap 5/17/2016 Go On Your Dream SUP Expedition With Help From The Hobkey Adventure Grant »