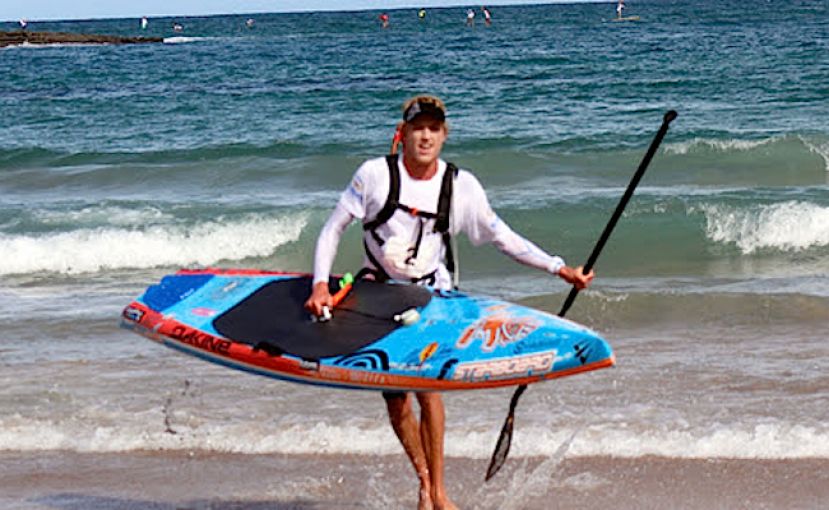 Connor Baxter is seen above coming to the finish line during the final event at the Alagoas Pro Grand Slam, 2014.

ALAGOAS, Brazil - Connor Baxter and Angela Jackson win both the sprints and long distance races in Praia do Frances at the Stand Up World Series component of the Alagoas Pro Grand Slam, taking the overall male and female wins for the event. 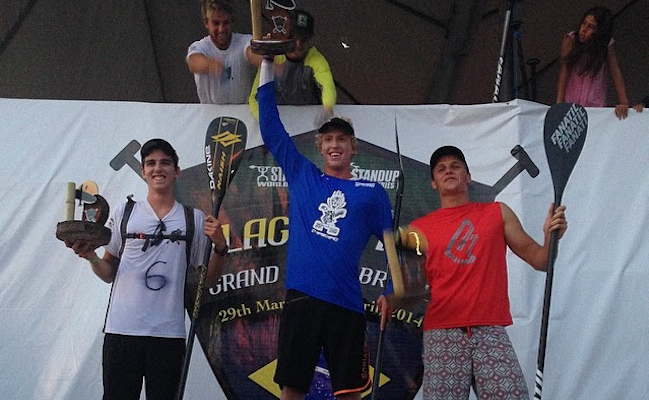 Connor Baxter (Starboard) put on a dominant performance on the second day of action at the Stand Up World Series component of the Alagoas Pro Grand Slam. The technical long distance course saw athletes face a bit of everything, from upwind to downwind legs and from a buoy turn in the surf to a fast paced section in the lagoon in front of the Hotel Ponta verde, the course provided a test of the athletes' complete skill set.

A dramatic start saw the usual suspects power off the beach, with Connor Baxter soon establishing the lead. A core pack of the World's best such as Jake Jenson (Fanatic), Kai Lenny (Naish), Kody Kerbox (Naish) and Zane Schweitzer (Starboard) were right on him through the first leg.

As the fleet headed down the downwind stretch, Connor started to break away, and only strengthened his position through the rest of the course to take a dramatic win. With a 1st in the sprints and long distance, it was a clean sweep for the young Champion. 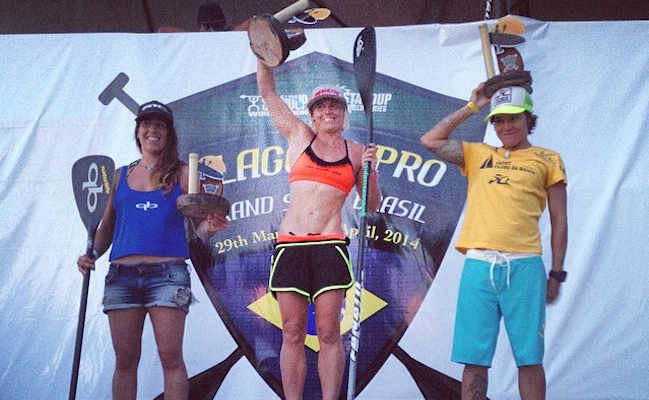 Angela Jackson (Fanatic) started the year off in style in Praia do Frances, with a first in both the sprints and long distance races as well.

Angela's winter training is certainly paying off as she built a healthy lead throughout the technical long distance course and powered her way through both the upwind and downwind legs of the course to take the victory. There is no doubt that Angela will be a major threat in 2014

Jake Jenson (Fanatic) continued where he left off in 2013 to put on a solid performance at Stop 1 of the 2014 Stand Up World Series. WIth a 3rd place finish in both the Sprints and the Long distance, Jake secured 2nd overall for the event, ensuring a great start to the year for the young Australian.

Jake, Paul Jackson (Fanatic) and Angela Jackson (Fanatic) have been on a rigorous training program over the winter, and it is already paying off, as Jake looks destined for great things in 2014. Stay tuned to www.watermanleague.com for more on Team Australia as they head over to Abu Dhabi this week for the next stop on the Series.

Another stand out was Barbara Brasil. Back in 2013, Barbara showed herself to be one of Brazil's fastest paddlers and a force to be reckoned with on the global stage at the Ubatuba Pro Grand Slam back in April of last year. This year Barbara once again proved her worth, finishing in 2nd place in both the sprints and the long distance races giving her a well deserved 2nd place overall. Barabara is certainly a name to watch out for looking forward on the Stand Up World Series.

Kody Kerbox needs mentioning as well.  He secured a 2nd place in the long distance, boosting him to 3rd overall. After an impressive performance in the Surfing World Tour event (where he finished in 5th place), Kody Kerbox (Naish) demonstrated that he is a serious force to be reckoned with in racing too.  He had an incredible 2nd place in the Long distance race, which combined with his 6th place finish in the sprints put him into 3rd place overall for the event.

Kody is one of the new breed of talented Stand Up Paddlers who are showing themselves to be phenomenal all rounders, able to excel at the top of both surfing and racing disciplines in this incredibly diverse sport. He is clearly a major force to be reckoned with in 2014 and we are expecting great things from this young Maui talent.

Laura Quetglas was another major standout and finished in 3rd place overall. Laura, who is from Spain, managed to complete a successful event at the Alagoas Pro Grand Slam with 3rd place finishes in both the sprint racing and long distance disciplines, to make it an impressive 3rd place overall. Laura is one of Europe's leading racers and will certainly be one to watch out for as the European Cup approaches this summer, starting in her home country of Spain with the Bilbao World Paddle Challenge in June.

The Alagoas Pro Grand Slam sees record entries in 2014, across all fleets.

While the Elite division saw over 50 athletes taking to the start line across both the Sprinting and Long Distance Races, the entry level and open fleet racing brought the number of racers in Brazil to over 350 for the event. This combined with the 120 surfers across both men and women divisions, made for an impressive footprint for the sport in Brazil (just under 500 athletes).