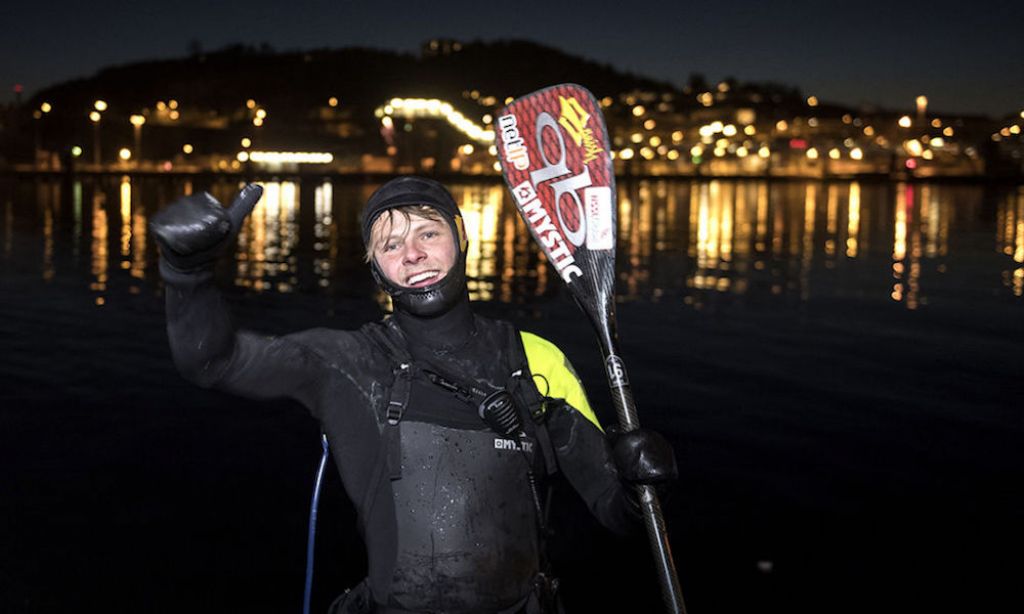 Steinfath all smiles after making it it Norway. | Photo Frederik Clement

SAN DIEGO, California - If at first you don't succeed, try, try, try again. And that’s exactly what the Danish viking did. After a failed attempt in 2017, Danish professional paddler Casper Steinfath made his second attempt at crossing the Skagerrak Straight and successfully completed the 147 kilometer (91.3 miles) trek between Denmark and Norway. In completing this journey, Steinfath become the first person to ever complete this route via standup paddle board.

During both attempts at crossing the Skagerrak Straight Steinfath was followed by a film crew that captured his journey from start to finish. Now, almost 8 months later, Steinfath is close to finishing his second documentary but is campaigning for a bit of help through kickstarter to get his project fully funded.

The feature documentary film Viking Crossing (working title) follows the preparation and mental development of the Naish professional SUP athlete Casper Steinfath, in his attempt to be the first person in the world to paddle from Denmark to Norway. A journey that received Expedition of the year at the 2018 SUP awards in California, USA.

Here is more info from Casper about the project:

Peter Alsted (the director from Standing On Water) is making a documentary film about the Viking Crossing. He and his team have been following the project from the first failed attempt to the successful one, but more importantly: He has followed and documented all the things in between. We are very close to finishing this film and we can't wait to share it with all of you.

But we face one last challenge, which is raising the money for post production (color grading, sounds editing, music, graphics, subtitles etc.) We have decided to start a Kickstarter campaign to help raise the final funds for the documentary.

Thanks a million! I can't wait to share the full story about the Viking Crossing with all of you!

To support Casper and his film check out the Kickstarter page HERE.