Make a simple video with your phone or camera displaying your latest trick(s) on stand up paddle and then submit it into the contest on the Boardworks Surf Facebook Page. ·Entries are subject to review and upon approval will be posted in the contest.  Prizes are listed below.  Click here to enter: http://bit.ly/aWhatsYourMove2012 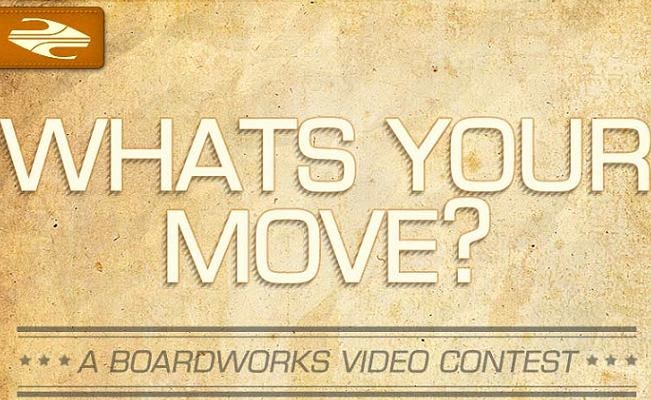 ENCINITAS, California - Boardworks Surf is fired up to announce the launch of this years "What's Your Move?" contest.  It is once again time to show your latest SUP moves and enter the fun to win great Boardworks prizes.

Last year Dino Tassara and Noah Yap tied for first in the inaugural and highly contested sup move contest by Boardworks Surf. Kai Lenny claimed second place. And Mike Harvey, representing the stand up paddle river culture, came third.  This year there are already several entries into the contest but there is much anticipation over what will still be submitted.

Now is the time to showcase the newest SUP moves and claim your skills!  Make a simple video with your phone or camera displaying your latest trick(s) on stand up paddle and then submit it into the contest on the Boardworks Surf Facebook Page.  Entries are subject to review and upon approval will be posted in the contest.  Click here to enter: http://bit.ly/aWhatsYourMove2012

At Boardworks our goal is to share our love for water sports and the lifestyle that surrounds them. We work to promote respect for the planet; it’s creatures and each other while making stand up paddling and surfing more fun for more people. Based in Encinitas, CA. Boardworks represents some of the best shapers in the world and brings their premier SUP and Surf models to the global water community.  Manufactured with our proprietary construction technologies. Our SUP brands include Infinity, Rusty, Paddle Surf Hawaii, Morrelli and Melvin, Badfish Standup Paddle, Dennis Pang, and Ohana as well as our own house brand of award winning SUP models. Our Surf brands include Von Sol, Hynson, Aipa, Kane Garden, Dewey Weber, Bruce Jones, Eaton and Hansen.