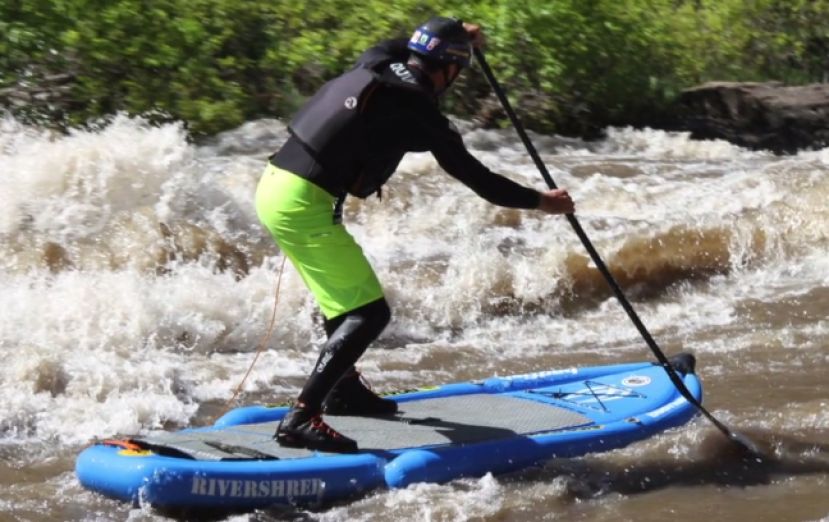 Inflatable standup paddle boards are becoming more widely used across the SUP platform. With each coming season the design and manufacturing of the inflatables are becoming more and more advanced. 2015 will be no different. Recently, Boardworks just announced it’s new design for inflatable SUPs called the “Rivershred.”

Mike Tavares, or, for those of you who know him via Twitter or Instagram as @rivershred, introduces you to the new design. Watch and learn!

New for 2015 the Rivershred is the evolution of the proven MCIT platform, designed specifically for river running. At 9’6, 40” wide and built on a 6” thick drop stitch platform, the Rivershred was put through extensive testing by the Badfish pro team in Colorado whitewater in order to create the most technically advanced, inflatable river running SUP, ever.

The Rivershred takes successful design characteristics from the MCIT, including the innovative side chamber rails, and improves on them for whitewater paddling. The side chambers stop ¾ of the way down the board allowing water to quickly drain off the deck after punching whitewater creating a dry, stable ride.

The side chambers allow the board to have superior secondary stability meaning the board is stable on edge crossing currents and coming in and out of eddies. Whitewater rocker was added to the nose and tail and the 6” drop stitch creates a very stiff ride.

The Rivershred’s personality on the water is nimble, tucking behind midstream boulders or making quick moves in the middle of rapids, the Rivershred was designed to allow you to be on line in whitewater. This season don’t be driftwood…shred the river!