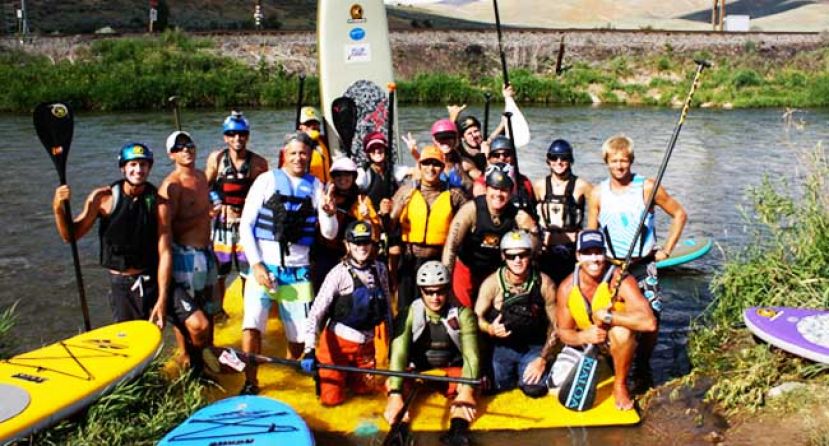 PARK CITY, Utah – To begin their fourth consecutive show at Outdoor Retailer, Boardworks Surf hosted its’ Second Annual Weber River Run on stand up paddleboards. With the growing interest in SUP, especially in the Rockies region in the whitewater category, there could not have been a better way to launch into the show week. “Our Annual Weber River Run is a great opportunity to get our Boardworks team members, reps, dealers, friends of the family, and media people out on the river having a great time together on our Boardworks products.  The trip really is an adventure for everyone, and at the end of the day the camaraderie it creates between everyone is priceless.” commented Phil Rainey, GM of Boardworks.

The Weber River Run is the perfect introduction to River SUP offering a variety of terrain with everything from flowing flat sections, rolling rock gardens, standing waves, and class 2 rapids. “It really has something for everyone. It is not too intimidating for newcomers and for more experienced paddlers there are plenty of obstacles and challenges to keep them entertained,” commented Gretchen Gamble. “I have to say it was the best thing I have done all year; a lot like the euphoric feeling you get from surfing except that the action is constant and the changing scenery is unreal.”

All in all, Boardworks hosted approximately 80 people for years river event and supplied its latest river SUP gear for everyone. This years new products on the river included the new SHUBU ‘show up & blow up” Inflatable SUPs and the full line of C4 Waterman Inflatable ISUPs, including the 12’6 River Runner which was the winning board of the Teva Games distance race and the new 10’6 Xtra Wide ISUP.  Also debuting on its first river adventure was the C4 IMat, a 10’x 10’ inflatable mat which inspired all kinds of shenanigans and was found to be able to support up to ten standing paddlers and a pile of SUP boards down some hefty little rapids (see the video attachment) “The amazing thing is that a lot of the boards we brought along on the river were our floor samples for the tradeshow and we put them through the ringer; banging them on and over rocks, throwing them off bridges and in and out of the truck multiple times, and they still looked great for the show” said sales rep Ryan Mahoney.

Boardworks would like to thank all who attended Second Annual Weber River Run and helped to make this years event an extremely fun and unforgettable adventure. We look forward to seeing everyone one on the river again next year.