The “Show Up and Blow Up” Demo Tour is coming to YOU, this Spring! 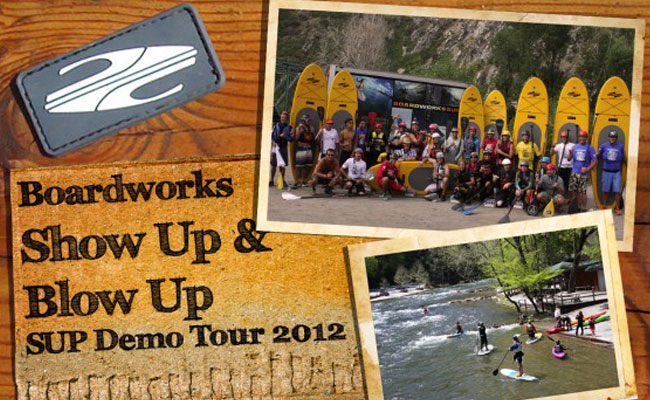 Stand up paddle boards of all varieties will be made available on hand at the SHUBU Demos.

ENCINITAS, California – Starting on the east coast this spring, and moving to the Rocky Mountains for the summer, Boardworks will be at every major whitewater event of the year.  These events will consist of product demos, clinics, and races, showcasing what the sport of SUP has to offer.

If you have been wanting to try Stand Up Paddle boarding but haven’t had the opportunity, this is your chance. Test new inflatables, Learn-to-paddle SUP’s, even world class race boards…all there, all for free, and all offered with SUP lessons for beginner thru expert levels. If you have been wanting to buy a Standup Paddle board this is a great opportunity to test drive some of the best products on the market.


“The beauty of the sport is that it can be done in any body of water, anywhere,” says team paddler and sales rep Mike Tavares.  Mike along with pro paddler Haley Mills will be traveling around the country and heading up the tour.  “Stand Up Paddling is something anyone can do. We know there are lots of people who want to try, but have not been able to make it happen…well here’s your chance. Haley and I have introduced literally hundreds of people to the sport. We look forward to helping more people get out for some fun on the rivers and lakes,” noted Mike.

Boardworks will be showcasing:

Its Inflatable SUPs including the Shubu “Show up and Blow Up” boards.
New game changing Multi Chamber Inflatable Badfish SUPs.
The Badfish hardboards – MVPs and the River Surfers (the premier river specific SUPs).
All around flatwater boards including the Raven, Joyride, and EPX models.
World Class race boards- Morrelli & Melvins and Ohanas.

Tavares and Mills will team up with local specialty retailers to make it all happen. Check out the schedule:

CHECK OUT THIS VIDEO of last years Nantahala Shoot Out

Stay tuned to Boardworkssup.com for more info and updates on each event in the tour.

The people at Boardworks are passionate about all things to do with the water lifestyle they all embrace. Their goal is to share that passion, to promote respect for the planet, it’s creatures and each other and to make stand up paddle and surfing more fun for more people.  Boardworks represents some of the best shapers in the world and bring their premier SUP and Surf models to the global water community manufactured with our proprietary construction technologies. Their SUP brands include Paddle Surf Hawaii, Rusty, Infinity, Badfish, Dennis Pang, Ohana, Morrelli and Melvin. Surf brands include Hynson, Von Sol, Aipa, Kane Garden, Dewey Weber, Bruce Jones and more.

More in this category: « Naish Launches a New Way to Connect SUP Company to Appear on ABC's Shark Tank »