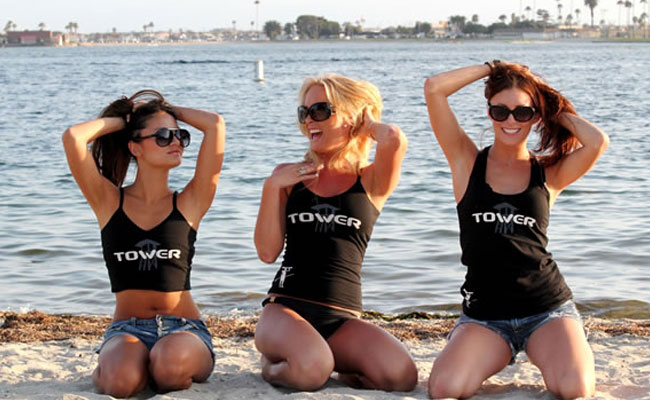 Tower Paddle Board Girls Posing at the San Diego Shoreline.

San Diego, CA – Beach-dwelling stand up paddle board entrepreneur, Stephan Aarstol, will be featured pitching his San Diego-based start-up Tower Paddle Boards on ABC’s entrepreneur reality show Shark Tank (Fridays, 8/7c). Over 24,000 entrepreneurs applied to compete on the 3rd season of the show, currently rated among the top shows in America on Friday nights. The episode will air on ABC at 8/7c on March 16, 2012.

Aarstol founded the SUP brand less than a year prior to being selected by the “Shark Tank” producers. The producers selected Tower largely because of the surging popularity of stand up paddle boards, but also in part for Tower's unique web-marketing based, direct-to-consumer eCommerce business model that brought visibility and market share to Tower among close to a hundred better-known and traditionally more established SUP brands. Aarstol’s approach is a little different than your typical SUP brand. By design, it's a manufacturer direct SUP company. They don't have any retail resellers, nor distributors, nor sales reps. You can only buy direct from their San Diego headquarters or thru their website and have it shipped nationwide.

“Our getting selected to be on Shark Tank is a great honor and opportunity for our business, but it is also a huge plug for the entire SUP industry.“ said Aarstol. “This sport is still relatively unknown in many parts of the country, so it's likely that this one 15 minute primetime segment could introduce several million new people to the great sport of stand up paddle boarding.”

Prior to starting Tower Paddle Boards, Aarstol – an online marketing veteran whose focus during his graduate business studies at the University of San Diego was entrepreneurship and new ventures – turned a $10,000 credit card advance into $2.5 million in revenues in its first five years in a similarly conceived high-end poker chip company (online at http://www.BuyPokerChips.com). That company's products have been featured on Spike TV.

Tower (online at http://www.TowerPaddleBoards.com) is a manufacturer direct stand up paddle board company. Tower is the brand, the importer, the shop, and the marketing arm, all in one. Tower intentionally forgoes the traditional surf/kayak distribution channel, which allows them to sell comparable quality boards at roughly half the price of the competition.