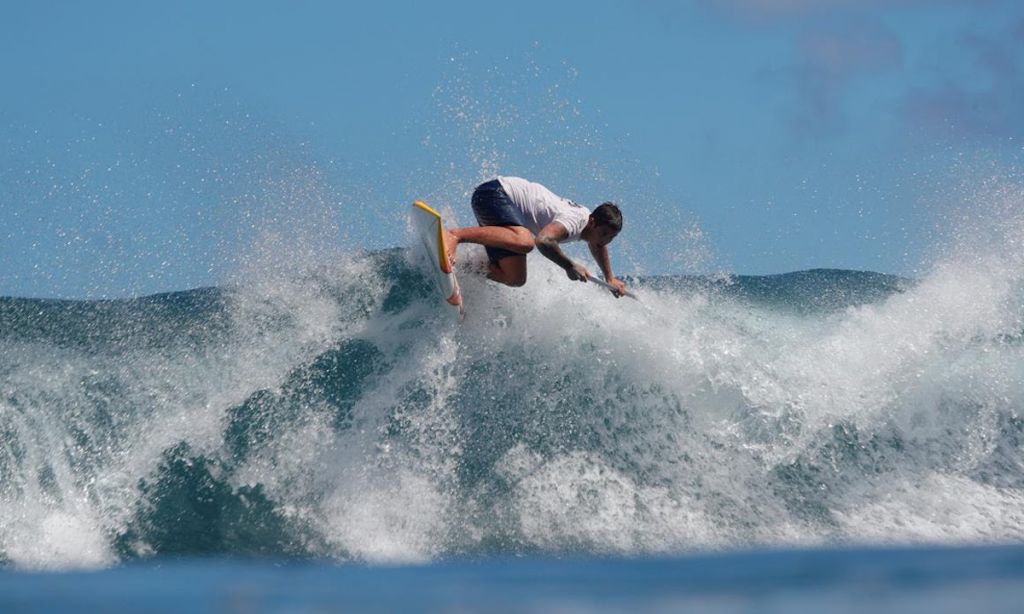 Barbados Pro kicks off with some great action and stand out performances, as Round 1 is completed for both Men and Women. | Photo courtesy: APP World Tour

BATHSHEBA, Barbados - After two consecutive lay days, competition got underway on Wednesday with pristine conditions for Men's and Women's Round 1 of the 2019 Barbados Pro. As expected, current World #1 Poenaiki Raioha from Tahiti came out of the gates all guns blazing, posting a couple of strong 7+ point rides and advancing directly through to Round 3. This was followed up by a strong performance from the leading French talent on the APP World Tour, Benoit Carpentier who posted a high 7 and a high 6 to skip the repechage to advance directly on.

But fireworks really started to kick off coming into heat 5, where Matheus Salazar came up against fellow Brazilian and current World #3 Wellington Reis, posting the first 9 point ride of the day. However, a contentious interference in the dying minutes of the heat, almost cost Matheus the lead, just holding on to advance directly in Round 3, sending Wellington to the Repechage. 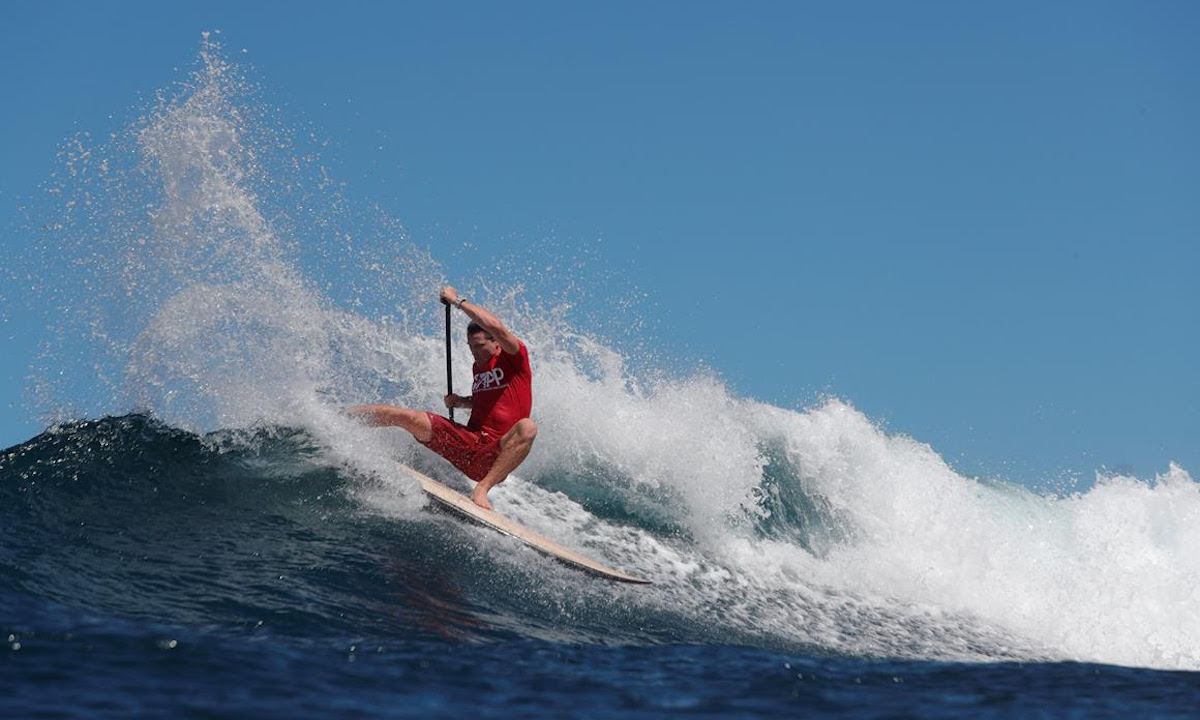 Sean Poynter from Florida skipped Sunset and had a disappointing finish in New York, but is back in full effect here in Barbados posting not only the highest heat score total of the day, but also the single highest wave score so far. Surfing with power and flow, Sean developed an almost unsurmountable lead in his heat, despite a strong performance from the up and coming Lucas Medeiros from Brazil, who will be looking for redemption in the repechage.

Meanwhile in the final heat of Men's Round 1, a lull in the conditions led to a less explosive show, but saw New York SUP Open Champion and current World #2, Luiz Diniz from Brazil edge ahead of the young talent from Puerto Rico, Maximillian Torres to advance directly to Round 3. 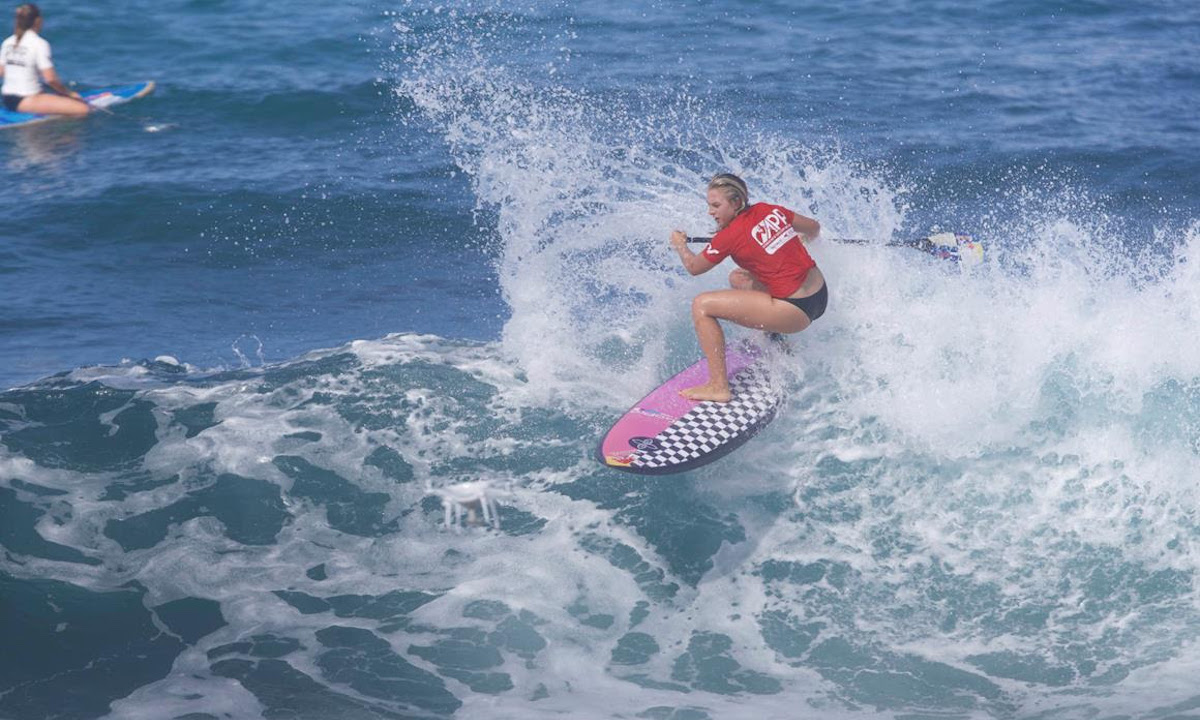 Top seeds assert themselves in the Women's division on day one of competition, as Soup Bowl provides the perfect playing field. | Photo courtesy: APP World Tour

In the women's division, competition was no less intense, with some close battles across the board, but top seeds for the most part coming out on top. Izzi Gomez came out of the gates swinging and was on her way to an excellent score, before coming unstuck keeping her score in the good range: however, it was enough for her to take the win and advance on into Round 3.

Current World Champion Iballa Moreno from Gran Canaria was able to rediscover her 2018 form to take a convincing win against the 2019 Sunset Beach Pro Champion Fiona Wylde, with a solid display of polished surfing. 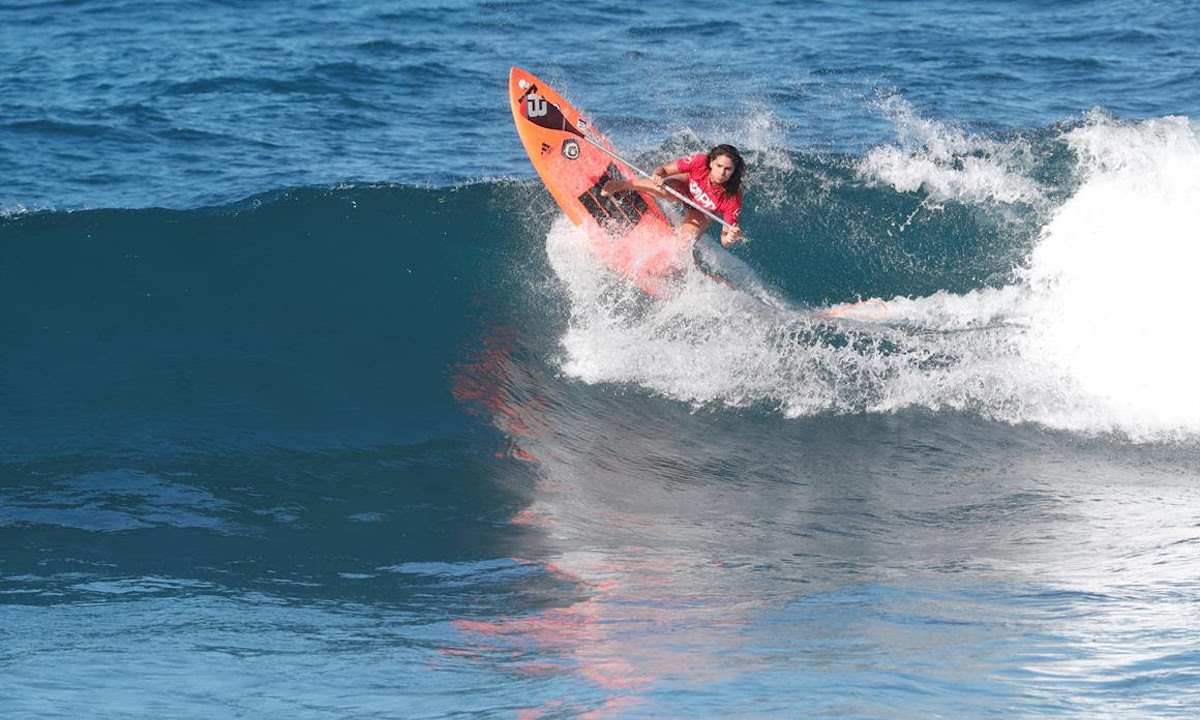 In heat 3, Aline Adisaka from Brazil led for much of the heat, continuing her impressive roll in 2019, but was edged out of advancing position by a late flurry of action from the Peruvian Vania Torres, who found the score she needed to advance directly to Round 3. Meanwhile, the final heat saw Shakira Westdorp from Australia, current World number 3 take control of the heat to take the win and skip the repechage round ahead of Lara Claydon from Maui, completing an epic first day of competition here in beautiful Barbados.

Check out the highlights, galleries and much more from the Barbados Pro at appworldtour.com & @appworldtour. 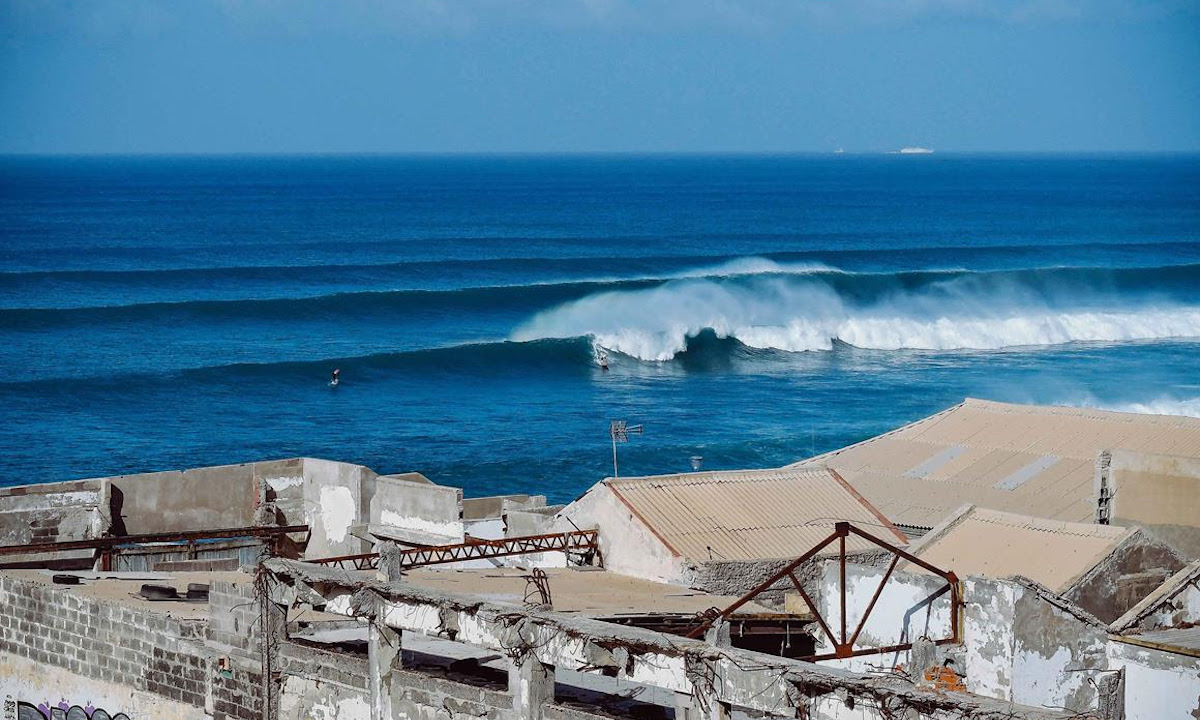 The APP is proud to announce the launch of a new concept: the Inflatable SUP World Games, to be held in Las Palmas de Gran Canaria in conjunction with the APP World Tour Surf Finals. | Photo courtesy: APP World Tour

The Gran Canaria Pro-Am made history in 2018, crowning both Men's and Women's World Champions in epic fashion with some of the best conditions ever seen on the World Tour.

As we prepare to return to Las Palmas de Gran Canaria for the 2019 World Championship Tour Finals (10th - 19th December), the APP is excited to announce the launch of a new concept event aimed at paddlers of all ages and abilities, to break away from the European Winter and make it out to the Canary Islands for a week to remember.

The Inflatable SUP World Games aims to bring together paddlers from all over the world for a week to remember: fun competition and participation for all the family, from team racing to individual titles, the Inflatable SUP World Games will have something for everyone as the APP puts on its final celebration of the sport for the year, held in conjunction with the APP World Tour Surfing Finals and in the company of the World's best.

The event will be held on the middle weekend of the Gran Canaria Pro-Am (14 - 15th December) in the Capital City of Gran Canaria (Las Palmas), to take advantage of its incredible beach front environment. Playa de las Canteras runs the northern length of the City, and provides not only ideal flat water racing at one end, but World Class Surfing at the other. The weekend will also feature an all important stop on the Canarian Racing Circuit providing local and international appeal.

So make sure to book your trip out to Las Palmas de Gran Canaria to check out the World Tour Finals, meet the Pros and participate in the inaugural Inflatable SUP World Games, with registrations now open at: appworldtour.com/gran-canaria-2019

One thing is for sure - it will be a show to remember, as the Girls take on the World Famous Soup Bowl for stop #3 of the 2019 APP World Tour, so make sure to join us for all the action LIVE from Barbados at www.appworldtour.com and @appworldtour 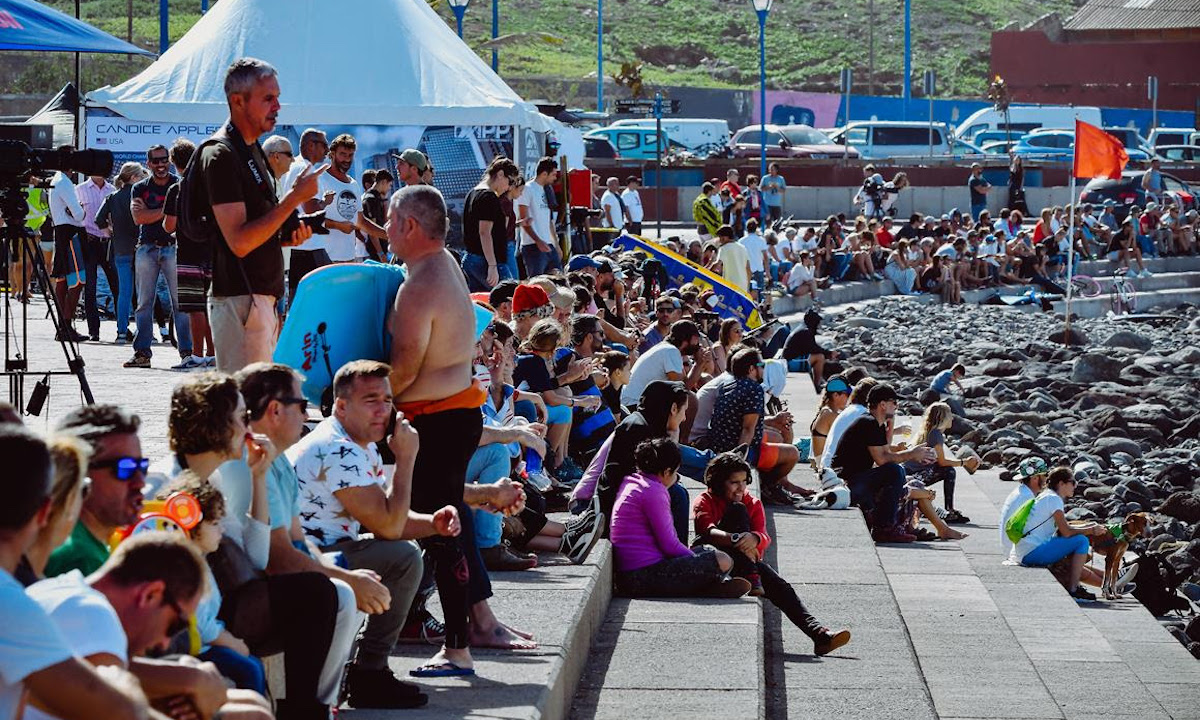