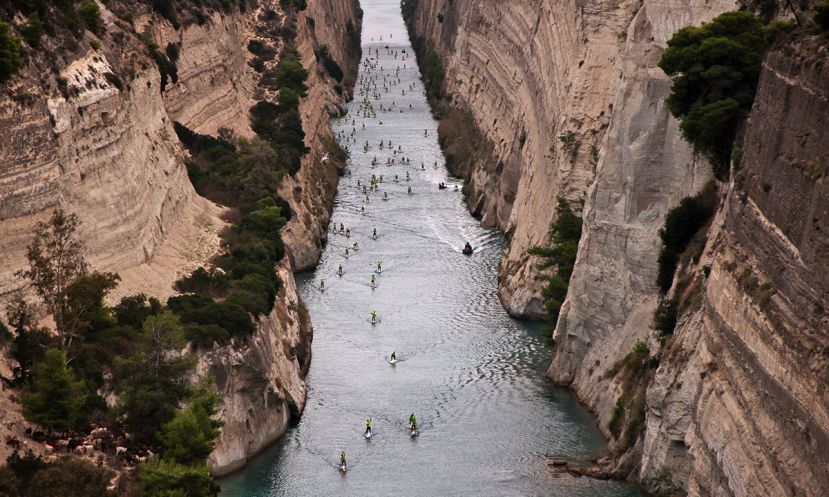 CORINTH CANAL, Greece - Since 2009 when we first saw SUP races in other Europe countries, and dreamed to organize such race in Hellas (Greece), as the Hellenic SUP community was just at its birth. Many ideas for the place were thrown on the table, but only one was standing out. And that was Isthmus. The famous and historic Canal of Corinth, which tyrant Periandros visualized on 7th century B.C. The canal helped the naval traffic and continues to do also nowadays. Today, 5 years after the first crossing, by 24 paddlers in 2011, the second by 65 in 2012, the third by 129 in 2013, the fourth by 147 in 2014, we stand across of this unique picture on November 1st 2015.

With cloudy weather, winds at a strong 25-30 knots and the temperature really low, organizers were facing the worst case scenario, just one day before the race, which was postponing or even canceling the race. Such thing was not an option for them as more than 160 participants had signed up for the race, not only from all over Greece but also from other European countries. The final approval on Sunday had to be given from the Coast Guard. Hesitating at first for the wind, they were very cautious, caring about paddler’s safety. After inspecting every detail of the race plan, they gave their permission. The race is ON!

Then the only problem that had to be solved was the canal’s current. During the previous week the current was changing direction every 6 hours as usual. But this had changed, due to the strong N-NE winds blowing at Corinth two days before the race. With the help of the Canal’s personnel and their experience, organizers managed to postpone the start of the race by 2 hours. Just enough time for the current to change and do everything as planned. At 12:30 p.m. all paddlers lined up, just before the Isthmia Bridge, struggling to keep their position as the wind and the current were giving them a hard time. Finally everything is ready for the grand finale of the 5th Hellenic SUP Cup 2015.

And the horn blows…

The World’s “straightest” race of 6.345 meters had just begun. The sound of paddles hitting the water was covering the cheers from the crowd watching the race from the shore across the canal. The wind was still strong above the canal, making turbulences inside. Blowing sometimes in favor, other times against and other on the side, paddlers had to adjust their technique and strategy to overcome these every-minute changes. After the first 500 meters where the distances were made and everything became more clear…SILENCE. The incredible silence that rules inside the canal with these massive (80m high) vertical walls. Only heavy breathing from paddlers, trying to find their pace. 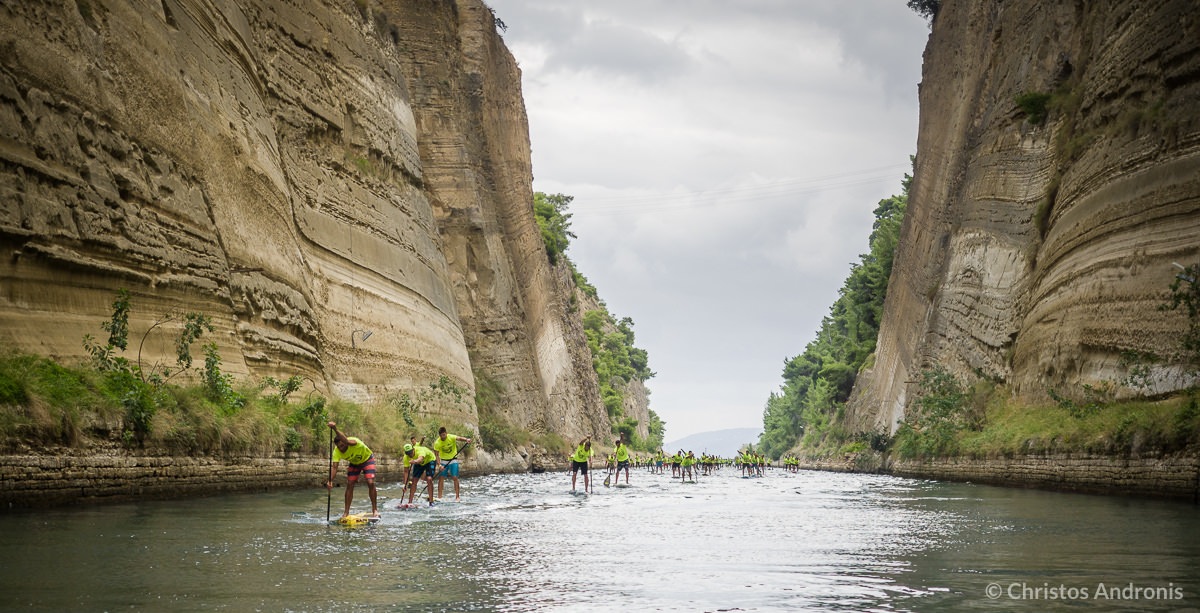 Great battles were given and many overturns occurred throughout the whole length of the canal, with paddlers facing the strong gusts of wind either against, making them literally come to a stop, or from the side making them to veer off from their route. As usual, George Fragos (Naish) won both the race and the Hellenic SUP CUP 2015. George Konstantis (Naish/Fanatic), 15-year-old Nikos Sirigos (Naish) and Alexandros Prapas (Rogue) made the leading pack with 14 footers and gained some distance from the rest of the racers, keeping the same order until the finish line for Men 14’0”. A big surprise was also two more 15-years old paddlers, Zahos Koumoudiou (Naish) from Cyprus, who managed to finish in 5th place Overall and first in his category (Youth 14’0”), followed by Phedon Doukas (Naish) completing the first six athletes in 14 ft. class. First in Men 12’6" crossing the finish line was Dimitris Apalagakis (JP), with John Tountas (Naish) in second place and Mario Kriti (Naish) in third. For the women, Konstantina Kontarini (Naish), a 16-year-old, finished second at the Race, but won the title of H.S.C. and Mikaella Yasoumi (BiC) won the 12’6.

Despite all of the challenges that had to be faced, everyone kept their pace and gave their little own battle until the finish line. The last part of the race was the most difficult, as the wind was blowing furiously (25-30 knots) at the exit from the canal and just a couple hundred meters from the finishing line. A great scene of the race was the two last kids (8 y/o and 10 y/o) finishing the race in cheers from the crowd watching but also from all other competitors. 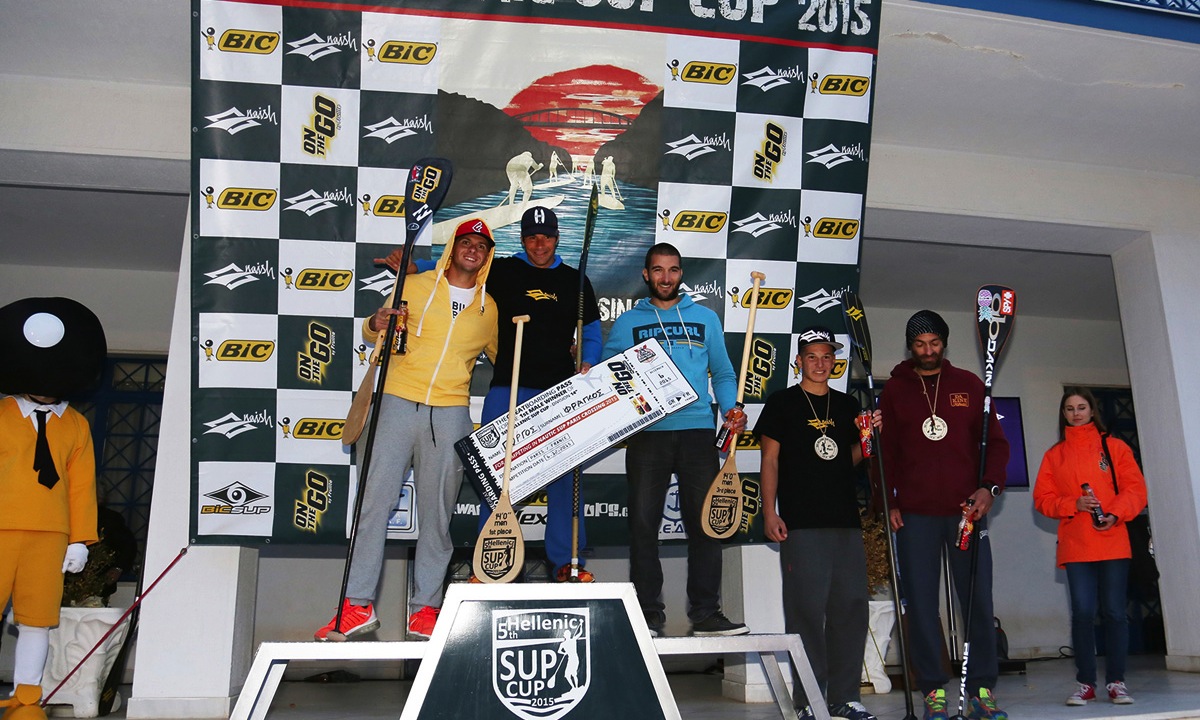 After the race the athletes were transferred back to the start with busses, where they had lunch inside the beautiful garden of Canal’s management building (Α.Ε.Δ.Ι.Κ). The time for the award ceremony of the 5th Hellenic SUP Cup 2015 and Corinth Canal SUP Crossing had finally come. Winners from all categories were awarded, among them also the oldest (Master) and the youngest (young gun) paddler. Organizers had planned also 4 big prizes for the winners of Men and Women in the 14’0” and 12’6” categories. Each of them won a ticket to Nautic Sup Paris Crossing on December 6th.

This difficult, from many angles, race was the closure for Hellenic SUP Cup 2015, which started on May 1st at Andros Island and ended on November 1st at Corinth Canal. It was the fifth consecutive year of this SUP race. A race, which sent the right message and managed to establish its existence in Greek watersports culture, with the Greek SUP community growing year by year.

Organizers would like to thank every paddler who traveled across every corner of Greece (Parga, Larisa, Mykono, Kriti, Keflonia, Andros) and those from Cyprus, France, U.K., Spain, participating and helping to raise the level of Greek Sup scene.

To see more news and to learn more about the Hellenic SUP CUP and the Corinth Canal SUP Crossing, Click HERE. Also, be sure to check out the video recap and results list below.

More in this category: « Shurfing, Peer-to-Peer Rental Marketplace, Merges With Spinlister 10 Days Left To Vote & Nominate In The 2015 Supconnect Polls »