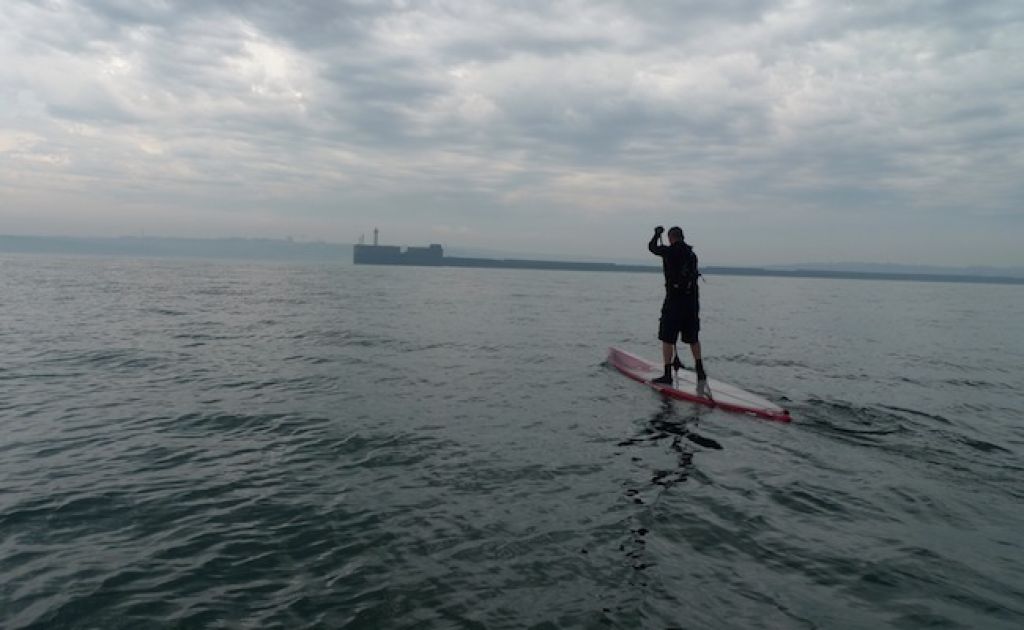 LONDON, England - Tim Whidburn, an Australian paddler living in England, recently crossed the English Channel on a SUP, raising £2,400 for St Christopher's Hospice along the way. It's a classic story of someone starting just over a year ago, taking to it straight and then creating a personal goal for himself. We've got heaps of respect for this kind of self-motivation and would like to tip our cap to Tim.

Here's the story, in Tim's own words.

As an Australian living in the UK, I have always missed the great outdoors - especially across varied water sports, as I used to do a lot of open water Surf Skiing ( 18ft Hayden ). I started paddling when I was back in Noosa, Queensland for a family holiday and saw loads of people on SUP's. At the time I didn’t have my ski and it looked like fun, so I took a chance and rented one for two weeks.

Let me tell you, I was hooked straight away. As soon as I got back to the UK, I purchased a Naish ONE SUP Inflatable and headed into the local Canals. After a few weeks I thought I might set myself a target, so I did some research and found out that there hadn’t been that many people who had paddled across the English Channel (UK to France) and I couldn’t find a reference to any Aussies who had done it either. So this was it – I gave myself 12 months to do it.

I trained every weekend, gradually increasing my distances and setting aside 2 long weekends in the UK's Lake District to test myself out at the required distance (21 miles ). It got a bit tougher during winter, with the lack of sunlight and general colder conditions – but I  managed to keep going and avoid any injuries. Stand Up Paddle boarding is still fairly unknown in the UK, so the looks I got on the canals in the middle of England as I trained were curious to say the least.

I purchased a 2nd hand 14ft x 27.5 inch Carbon Fanatic Falcon for the trip and included this in my training. Towards the end of 2013 I found a company who would help pilot me across the channel, safely ensuring I did the required distance and kept to both the UK and French Maritime laws. They specialized in this type of thing, guiding many kayakers over the Channel previously – no SUP'ers yet tho - so they knew what they were  doing and this proved crucial in the planning and management of the tides.

As they big day approached, I was watching the weather like a hawk praying that the week I had booked for the crossing 6 months in advance would provide suitable conditions – we could predict the strength/time of the tides but not the rest of the weather. I lucked out.. On the Sunday the Captain, Will, confirmed we were a go for a Monday departure.

We set off on time - around 8am. I was transported to the start point, Dungeness. The weather report predicted there would be no wind that day, but this didn't happen. At the start it was very choppy and difficult - I remember thinking it looked like a washing machine. Over the duration ( 6.5hrs ) of the crossing the weather generally got better and the water became flatter and more calm. There were a few minor rain squalls in the middle of the UK shipping lane and a thunder storm threatened at the end. I had planned to put in the headphones and listen to some music... that didn't happen either ... out in the Channel there is always some sort of cross swell / current to toss you off the board. I honestly couldn't break ficus the whole way, else I'd be thrown off.

The water wasn't cold and to be honest the break from standing in that position was welcomed by my back. The mental process around having absolutely ZERO idea where I was in relation to anything really took its tole mentally - its hard to explain how much I needed to concentrate. There were no points of reference until right at the end, when I got closer the French coast.

I just had to follow the pilot boat. The Captain (Will) had set GPS way points, which we needed to get to at specific times to ensure we weren't going to be taken backwards by the tides and to ensure that I paddled the distance ( 19 nautical miles / 35k / 21miles ). This explains why my personal GPS map showed a type of banana-shaped track. I saw one dolphin , but he didn't hang around long and I kept a look out for MH370 - but didn't spot that either. I saw some very large cargo ships ( Will said the radar indicated one was over 400m long ). We kept our distance and obviously gave them right of way so were never in any danger.

I eventually got to Boulogne, France  and finished! We then parked up in the Harbour with nobody batting an eye lid or asking for a passport. What a pleasure. To round up the day, I had a shower at the Yacht club ( 6 euros ) and walked into town for a well deserved beer. A few hours/beers later, I happily got back on the boat and we powered home into beautiful, clear weather - stopping off at a few of the channel markers for a few photos.

All in all, it was 1 year's worth of training culminating in a day I will never forget.